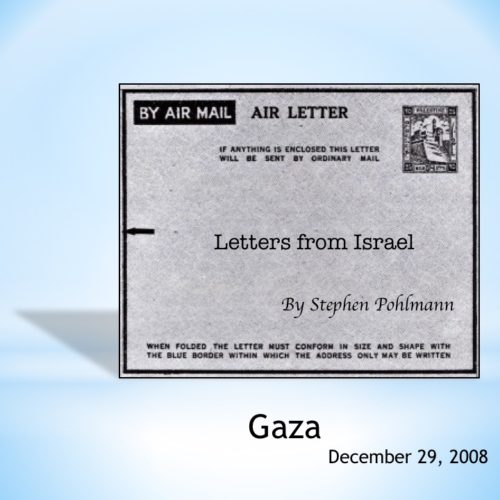 If I don’t write now, some may say ‘what can he write? How can he defend this?’

And now that I am writing, some will say ‘he would say that, wouldn’t he?’ – Whatever I say.

And I was composing a totally different letter when all this ‘broke out’. A story around ‘Fiddler on the Roof’. Rain check.

‘Now we have a chance to prove that we deserve a country’, one moderate Palestinian journalist said at the time of the withdrawal.

Israel’s (and Egypt’s) blockade did not start on day 1. The rockets from Gaza which had been started about 8 years ago, continued on day 1. Since then, Sep 12, 2005, there has been an average of 8 rockets fired from Gaza into Israel every day. Have you ever been the potential target of a bomb? I have. Even a Kassam, which could go anywhere. Does that make the potential injury or death any less painful?

The people is the south of Israel, those within range of the bombs, have felt terror every day of those 8+ years. The fact that only a handful have died makes not 1% difference. Terror is terror.

Disproportionate…I hate to linger on this so ugly subject, for rockets are rockets, death is death, but it needs to be said that the rockets from Gaza are 100% aimed at the civilian population, and only once or twice have hit military targets. Israel’s ‘targeted bombing’ is 100% aimed at Hamas members and installations.

Gaza is an overcrowded mess. Innocents will be hit. Our sin for attacking? Perhaps. Their sin for continuing the rocket attacks, knowing that eventually Israel will have to retaliate, and that their innocent brothers and sisters will suffer? In my prejudiced opinion? A much greater sin. There’s a limit to turning the other cheek.

For 3 years, Israel has been sitting on its hands, while the bombs come in, daily. (Aviva and I were having coffee in the garden of friends of ours in Kibbutz Dorot, next to Sderot, and we saw 2 Kassams being launched and flying over our heads). The World applauded Israel when we sat on our hands during the Gulf War, with Scuds falling on us daily (we also experienced the terror of that time, the bombs exploding near us, the fear of gas).

UN demands a ceasefire. Yet during the years of daily rocket attacks from Gaza, almost silence.

This morning, Jenny Linnell spoke to BBC from Gaza. She works with ISM, the International Solidarity Movement, a pro-Palestinian human rights organisation. She was speaking from Rafah, the very crossing that the Egyptians control. There have been reports of Palestinians trying to escape the Israeli onslaught, but being prevented by the Egyptians. Jenny describes the attacks, the fear, the victims and the damage. I believed her; how could I not? Even if from her ‘different’ point of view, it was still quite believable.

It’s the balance that concerns me. She could have been reporting from Sderot, describing exactly the same scenes that have been going on for 8 years – long before Israel evacuated Gaza. Had she reported in the same way some years back, not from Gaza but from Sderot, perhaps the World would have listened, stopped those bombs, and prevented today’s tragic consequences.

Two wrongs don’t make a right’ – or whatever the idiom. I hear constant criticism, but I hear no constructive advice – except the naive ones, such as ‘talk’, give them a country’ etc. etc. You should have heard the discussions on this morning’s radio here. Every day, …talks to people on many subjects, but primarily politics. This morning, 4 of his many conversations were with Arab members of the Israeli Parliament – the Knesset. Some are more ‘involved’ than others (trying to avoid the ‘extreme’ word).

You should have heard Ahmed Tibi, perhaps the most vocal of all his colleagues. We call them Israeli Arabs; they call themselves Palestinians. He talks like a Hamas leader. We listen; we really do listen. We may not like it, but he’s a member of the Knesset; has political immunity; has far-reaching rights. No one can accuse us of not listening to or appreciating the other side. They are part of our parliament, part of us.

What do they want?

Back to 1967 borders (although for many, especially Hamas, this is and will not be enough) – OK…They started a war over the subject, they lost. We offered to give back everything, they refused. We started to settle. We are ready to compromise, 93% of the area of the West Bank was on the table. There has to be compromise.

Right of Return – Again after starting a war that was lost. On paper, that’s 4 million people today; it will be far more in 2050. Return to the Palestine set up by UN in 1947? OK.

Jerusalem their capital – Actually with East Jerusalem now almost totally Arab, many would have no objection. To be negotiated.

Security for peace – Isn’t that back to square one? Sorry to remind, but over the 60 years since the establishment of the State of Israel, it’s Israel’s neighbours who have not accepted the existence of the country.

God forbid we should defend ourselves; God forbid that we’re successful; God forbid that the once non-existent Israeli and unimaginable armed forces have been built up to what they are now. (And I have to add that, 60 years ago, the Arabs were also militarily weak – but one cannot say they were not fighters – go see ‘Lawrence of Arabia’).

Finally, a reminder. the recently-democratically-elected Hamas was established in 1987 with a charter that had zero to do with living with its neighbour. Their 2005 manifesto was softened slightly as a preparation for the elections. But I don’t think anyone can deny that Hamas has never indicated their belief that one day they will live in peace with Israel.

Oof, I just want to write about daily life, Nature, culture – plus a few crazy stories. Politics, even war, is a bore. It’s like hearing about people who are constantly sick. One gives up feeling sympathy. Why can’t they just take the pill and get better?