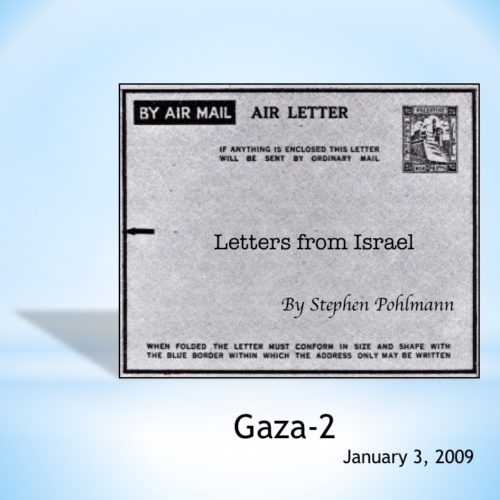 True, I do not write from the Palestinian point of view. It is always important to try to see from the other’s point of view. I try. But we are sometimes from different worlds, and that makes it difficult to put oneself in the other’s shoes. I saw ‘Babel’ yesterday on TV – the film about an American couple of a tour bus in Morocco. She is shot by accident – by a simple goatherd’s son – and it sets off a series of events around the world. The film illustrates those differences.

I have attached here a slide show I received, focusing on the colour red – and what it has meant to the people of Sderot for the last 7 or so years.

The outsider’s response may be that I should see the scenes of horror in Gaza. Well I do. I do see some of the same news that the outsider sees.

It’s so easy to feel safe. The outsider is a million miles away from the terror – the fear of the potential incoming bomb. We, here in Tel Aviv, feel that way. That’s human. If it’s not here, it’s far away. But the bombs are now falling 40 km. from Gaza. Tel Aviv is only 50 km. from Gaza. (Add 6-7 km for north Tel Aviv). That’s how fine the line is between going now to the craft’s market and buying things for our forthcoming overseas trip – and running to the bomb shelter when there’s a red alert.

The papers here are full of possible solutions – from the screaming left to the screaming right. But the common consensus is that the Palestinians have to persuade Hamas that they must try another way. And I do not only mean the end to violence. That’s too obvious. I also mean an end to the dream of a country without Israel as a neighbour. If Hamas can be persuaded by their people (just as the IRA were persuaded by their communities) that they must accept the two-state solution, then we can perhaps move forward.

Tawfik Hamid is ‘a medical doctor, a Muslim reformer and writer of the book ‘ Inside Jihad’. Oh that the moderate Muslim be heard…Here is a précis of his article in the Jerusalem Post…In general, there was an immediate reaction against Israel after the attack started… “I ask myself why the Arab street and its supporters in the West never show similarly strong response against Islamic terrorists who target innocents worldwide and explode markets full of predominantly Muslim civilians in Iraq, Pakistan, Sudan, Turkey etc.” – not to mention the Hamas slaughter of rival Fatah members – women and children included. And what about Mumbai?

“An insular tribal mentality still governs the Muslim world, and there is no willingness to demonstrate against fellow Muslims, even against those who have committed great crimes against other Muslims”. Then there is plain old anti-Semitism. “It is so easy to demonstrate against the Jews or Israel – and extremely rare to see demonstrations in support of Jewish victims, such as the altruistic rabbi and and his wife who were singled out for special torture in Mumbai by the Islamists”.

…they must realise that if Hamas had stopped pounding Israel with its rockets, Israel would not have attacked. If the Palestinians focused on building their society rather than destroying those of others, the whole region would enjoy peace and flourish.

“Should Palestinians recognise the right of Israel to exist, end terrorism against Jews and nurture a sincere desire to live in peace, they would end their suffering. The solution is now simply in the hands of the Palestinians – not the Israelis”.

This morning, Saturday, UK’s foreign minister reminded us that Gaza is less than the size of the Isle of Man. What is his point? Terrorism is terrorism. Look at UK’s reaction/s to the 7/7 bombings. What does Israel have to do to make the critics realise that thousands of bombs over an 8-year period is something that cannot and should not be tolerated?

Israel is, with no doubt, the craziest country in the world!!!

Israel is under a shower of rockets attack, but this fact do not stop us from forwarding the Gaza strip humanitarian aid on a daily basis…….

Oh, I wish I could write about these….