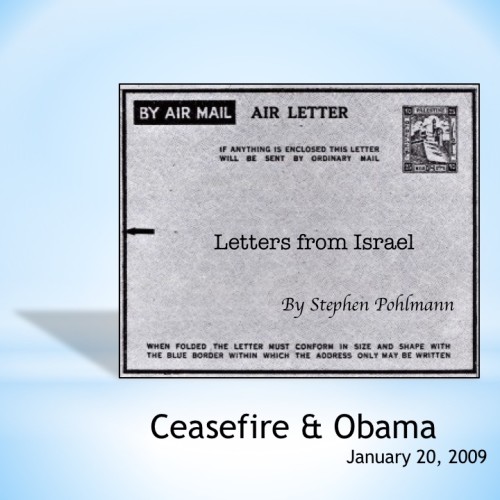 They ‘will judge you on what you can build, not on what you can destroy’. Those were a few of the words from Obama’s lips today. They were aimed directly at the Moslem world, but I appreciate that some will feel they were also aimed at so many others.

The ceasefire in Gaza may have been partly ‘arranged’ to give a little breathing space – and respect – to Barack Obama. That’s a very strange way to ‘play’ with people’s lives, but that’s a fact. (I recall many a time when the visit of an important overseas politician heralded 1 or 2 devastating suicide attacks in Israel).

In Gaza, devastation, deaths and misery. It’s all there.

The Economist calls it the ‘100 Years’ War’, and, without having read the article, it does remind people to take a step back and realise just what had been going on for so long.

Time’s headline last week was ‘Why Israel Won’t succeed’ (or words to that effect) – almost identical to headline in Canada’s McClean magazine some months ago (about which I wrote at the time).

I’m thinking of starting a campaign…something like B.A.D…Build Another Dubai. I would use every means to persuade those who, so often in the past have been helping/pushing the Palestinians to invest in self-destruction and 100 years of misery, to now invest in streets, homes, schools etc.

Build a future, instead of a past. Persuade the mothers of suicide bombers to be mothers of builders, teachers; in future, fathers and mothers. Change UNRWA into UNBAD. Get the Arab ‘brothers’ to construct instead of destruct, and the Europeans to stop waffling.

If ‘real peace’ were declared today, a large majority of Israelis would not only show support, they would also have the mental ability to accept and live with it. The rest would be flooded under Israel’s ultra-democratic system. Unfortunately, a majority of Palestinians have had generations of negative education, have been taught to hate, to have no hope in anything but their neighbour’s destruction – they just have no concept of ‘peace’. That’s where B.A.D. comes in….