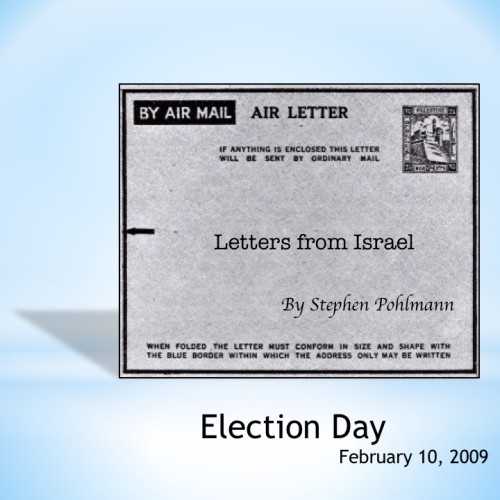 It seems that’s also a sign for the temperatures to drop and the (much-needed) rain to fall . Even got thunder and lightning right now. Quite Wagnerian…

You will surely know by now, at least if you have been reading these Letters, that there are not only Arab members of the Knesset (Israeli parliament), there are quite a lot, and not all members of one party. There are 3 main Arab parties, and one of them, Balad, will almost certainly welcome their first female Arab member as a result of this election.

An expected shock is the recent surge of the Israel Beteinu (‘Israel, Our Home’) party, led by Avigdor Lieberman (‘Loverboy’?). This is a party of the right-wing Russians. Because the Sephardic (Spanish/Eastern) Religious party, Shas, is so vehemently against Lieberman, he is considered to be so ‘non-kosher’. Fact is that they are Jews who wish to separate State from Politics and reduce the powers of the rabbis, especially  in such things as marriage, divorce, funerals. (There is currently NO civil wedding in Israel).

#8 on their list is an orthodox Jew, so they can’t accused of being anti-religion.

The same party is considered quasi-Fascist, and it is certainly true that they would love to have some kind of ‘loyalty-test’ for each citizen, similar perhaps to what every new American citizen has to go through when he gets his I.D. – and many other countries. Admittedly, it IS sickening to have not only citizens but also members of the Knesset who use quite traitorous language in their speeches. That’s democracy for you…And Israel Beteinu’s # 12 on their list (they are expected get up to 20 seats) is a Druze Arab.

Around 1/8 of Israelis are currently overseas and, unlike in many other Western countries, are ineligible to vote. Not here – no vote…

So, who’s gonna win? Well, of course no one. It’s going to be another coalition – and almost inevitably, a stalemate. There’s such a large number of voters who will not have made up their minds until the last moment. Tzipi Livni has done well in the last days, and has almost caught Netanyahu up. Lieberman is the shock, having taken over 3rd spot from the traditional powerhouse, Labour (Barak). With the security problem being high up on the list of priorities, the swing to the right was inevitable.

Do you really know what it’s like here? Can you imagine? A country that has never felt real peace, never been accepted by the neighbours. Where crossing the physical border is far worse than the security stuff you get an regular international borders.

I just spoke to our local newsagent, Danny, an Englishman, whose son was killed during the Lebanon War 2 1/2 years ago. He was a leading soldier; it was a very big funeral, with top military personnel as well as politicians also attending. Benny was 3 weeks married; had not yet been on his Thai honeymoon. Thank God Danny has 2 other kids and now grandchildren – but that’s not really compensation, is it?

There were hot rumours that Gilad Schalit would be released in time for the elections. That has not yet happened. And if/when it does, it will not be at any better price than demanded before. Disproportionate? The deal is for about 1,000 Palestinian prisoners to be released for our soldier. Israel considers all of them criminals and/or terrorists. Many are 100%-known to have been directly or indirectly involved in terrorism. Most of these openly vow to return to terrorism once released.

Have a look at some of the cartoons, which illustrate the blindness of some of the World community about what is going on here. OK, 2 wrongs don’t make a right, and all that. And it is certainly true that we have only gained so much with the horror of that Gaza victory. But a poll last week in Gaza and the West Bank showed a big drop in Hamas’s popularity.

If there were an election today (that’s a laugh), then Hamas would be out, and the road would be slightly more open to peace negotiations.

Some Israelis rightly ask if we are the only ones involved who really want peace…..