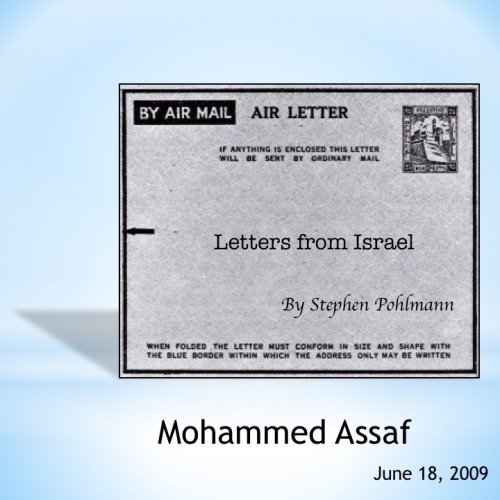 The BBC reporter described the Uyghars in China as ‘this tiny Muslim population’….No one’s heard of them. Yet there are 16 million of them – a similar number to the global Jewish population. Gosh, do we make a lot of noise…

And today, I am sure you could all hear it. For Israel reached the David Cup semi-finals for the first time in its history, having gained an insurmountable 3-0 lead against Russia just a few minutes ago. It was a little unfair, for the crowd was almost a 3rd player. They were even officially warned by the referee. But that’s Davis Cup; it’s like that in every location.

The Israeli pair had two historic match points in the 3rd set – so almost an easy 3-set victory. But they let that slip, and then went on to a very nerve-racking 5th, and almost 4 hours of shivers..Wow.

In all the years I’ve lived in Israel, certainly the years since I started writing this letter, I’ve never had a one-on-one discussion with an Israeli Arab – Palestinian. I’ve talked to some Arabs living abroad, a couple of whom were Palestinians. But last Thursday’s experience was new for me. There are 1.2 million Palestinians in Israel who have Israeli passports, who vote in Israeli elections, resulting in Arab/Muslim members of the Israeli Knesset and, as I have stated before, even an Arab President, albeit in his position as deputy speaker of the Knesset while the others were unavailable.

There are another 150,000 or so Palestinians in Arab East Jerusalem, who have Israeli identity cards. Among these numbers are over 1,000 dentists. I met some at the last Israeli dental expo, and on Thursday, Mohammad Said Assaf and I sat down next to the beach and had around 4 hours of open discussion.

I am sorry we did not record the conversation.

First, there were no raised voices, despite the frequent differences of opinion. There was some optimism, but manly because we spoke, not so much that we discovered any solutions.

Mohammad has family who have suffered directly from the conflict: his grandparents lost their home and are among those (of the potential 4 million today) who WOULD want to return. (I told him that 1/2 million DID stay – the Egyptians call them ‘The 48-ers’ – and have become 1.3 million Israeli citizens).

He told me that his brother – then 14 – was wrongfully arrested and imprisoned for 48 days, accused of throwing stones at Israeli settlers. It was proven later that the soldiers could NOT have known who threw the stones. (Clear injustice, yes. But stones WERE thrown. The brother was innocent, but someone was guilty).

He claimed Jerusalem IS mentioned many times in the Koran – I have yet to be convinced of this.

He defended the claim to the holy places in Jerusalem, as they are holy to all 3 of the ‘involved religions’. I have always wondered why the followers of Mohammad could not be a little more sensitive, and decide that their Leader went up to Heaven on his white horse just a little further down the road, so as not to build on the very site of the Jewish Temple.

Mohammad illustrated the difficulty there will be in uniting the Palestinian people under 1 ‘democratic’ flag. Fattah is considered by most to be a political party with various factions – like any. Mohammad described it more as a movement – and one with many voices. That of course means that, although its whole may be greater than Hamas, the fact is that supporters of Hamas usually vote only 1 way, the Islamist way, and Hamas will always win the ‘democratic’ election.

(That makes my ‘dream’ of a Palestinian ‘Mandela’ all the more relevant. Someone who DOES have the backing of both sides, who does have the required charisma, and who preaches co-habitation, not revenge).

Mohammad is as hopeful as I am that Obama could use HIS charisma, popularity, Islamic/black/minority background to bring peoples together who would otherwise not communicate. But, as Obama’s speech in Accra illustrated, the problems have to be solved by the locals – he can only create the required atmosphere.

I was sad to hear Mohammad repeat the oft-repeated ‘why do we have to pay for Europe’s problems’. First, as many have reminded Obama, Israel was not created by the Holocaust. It may have been the ‘final straw’, but Zionism, and the reasons for it’s philosophy, were born many moons before. Second, Jews do have a right to be in Israel, and their history there DOES go back further than any other religion’s. Third, Jews have ‘tried’ to be in that area since 5,000 years. The absences were only as a result of forced exile.

Fourth, and this is the saddest aspect of the whole thing, what happened to tolerance? You may not like your neighbour; who does? But live and let live is being practiced in many parts of the World. Why not here? Mohammad does admit to the existence of tribal mentality – and the continuing conflicts between the many Arab and Muslim communities in the Middle East.

There were – and there surely would be conflicts, even if there were no Jews here. Despite the apparent hatred of Jews, it is an illustration of the intra-conflicts that there has been little unity between the Arab nations on this subject. Even the Arab League has trouble keeping its members in tow.

Much of Mohammad’s complaints focused on the hardships of the Palestinian people – especially today. First, I HAD to answer that this is the sad consequence of war. I tried to avoid the facetious remark that if you start a war, you have to accept the consequences. But there is no question that today’s situation, looking at it subjectively, is bad. The constant security measures that are in place, especially throughout the West Bank, make life miserable for many Palestinians.

It does not surprise me – and certainly saddens me – that some Israeli border guards take unfair advantage of their position, and make a bad situation only worse. (I can tell enough horrible stories of border guards – immigration officials – passport officers – between the old borders in Europe, between East and West, between Switzerland and Germany, between France and UK – in fact, between France and any of its neighbours). No matter who was to blame for the border controls being established, I do believe Israel should do its best to act decently.

There were complaints about the security wall (fence, barrier). It’s a fact that its construction is still not completed. But I would argue till I am blue in the face that the results speak for themselves. Before its construction there were constant suicide bombing attacks. Now there are almost none. Presuming and hoping that the barrier will be removed ‘when there is peace’, the sad price that is being paid by individual Palestinian families, whose lives are disrupted is unavoidable. They hopefully will be compensated when peace is achieved.

Mohammad did show a tendency to ‘live and let live’. I really do believe that he is one of many Palestinians who can envisage co-habitation when there is peace. This country, Israel, is a strange place to describe. There are many countries who mix religion with nationality – and with the soul. There are many countries which are Christian or Islamic, there are political parties which describe themselves as such. Israel is just another of those – just happens to be the only one which is Jewish, whatever that means.

Take today, for example. There are many regional sports events around the World. But what is there to compare to the Maccabiah Games, which has its opening ceremony here today? First held in 1932 (pre-State of Israel), over 5,000 Jewish athletes from 50 countries will join the over-2000 Israeli athletes competing in 31 sports over 10 days. One of the largest sports events ever to be held in the World.

Why? What’s the point? Is it because of the persecution complex that has resulted from thousands of years of anti-Semitism? ‘We gotta stick together’…Perhaps. But the comradeship that is experienced because of the Games is a wonderful thing (I chatted recently to some Australian tennis players). It is something to be admired. EVERYONE should treat and greet their fellow-citizens in this way. But that’s never going to happen. In the meantime, when I see such celebrations, I see a country that is prepared for peace. It has so much to live for.

I felt that Mohammad is close to being such a person. He is a decent, educated person, qualities that are necessary to make peace. He is badly affected by what he sees in front of him – but those negative events are superficial: a result of stupid individuals. Somehow, an environment needs to be created that helps us and them see the whole picture.