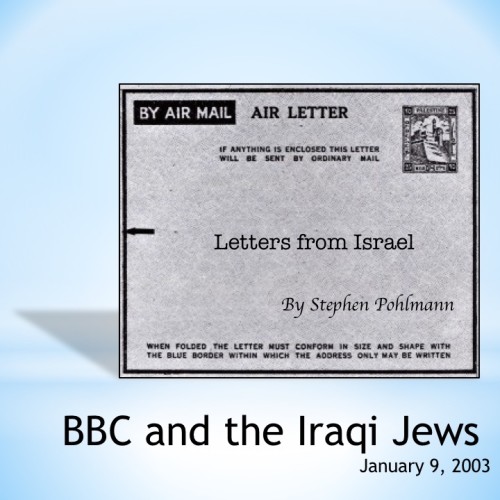 BBC News has prompted me to write a little more.

First, I wrote 2 x ‘reaction’ in a paragraph in my e-mail of 2 days ago, which was wrong. The paragraph should have been thus:

“There are so many complaints by moderate Muslims of the World at the amount of anti-Muslim feeling around. Well, I think they should push to get rid of the ACTION before they criticise the reaction.”

Just this minute, BBC reported on the Israeli Supreme Court’s overturn of a ban on 2 Arab members of the Israeli Knesset. I actually have no complaint about the actual report. But I was reminded of how the story will sound to the ‘ignorant’ (which means the 99% of all of us who really have not time or interest in knowing the background to the thousands of stories that are in the news all the time).

In most other countries, members of parliament who literally scream their hatred for the government, the country, and support Palestinian suicide bombs, would be ‘thrown out on their ears’ – if not imprisoned or even ‘made to disappear’.

So often, we in Israel get fed up with our excessive democracy, that allows such people to bad-mouth the country in such a way, using the immunity-protected parliamentary membership. But on the other hand, it is one of the main principles to which Israel sticks – and it is an important weapon on the propaganda war.

It may be appear to be tough for the 1 million Israeli Arabs here, but so often, it can be proved that it would far tougher if the same person were outside Israel (be located, say, in Jordan, Syria or Lebanon – have a look at the 54 year old refugee camps there).

Good friends of ours visited us last night. They’re having a lot of construction work done. The workers are a family of Israeli Arabs. Don’t immediately think of some pathetic blue-collar guys. These are quite wealthy and educated guys. They run a thrivign construction business, own much property, possess large sheep flocks etc. And they’re extremely nice guys. The current situaion DOES limit the niceties and political discussions, but not as much as you would think.

BBC also reported on exhibition currently being shown at London’s Jewish Museum on the history of the Iraqi Jews. Did we know how important this community was; one of the oldest Jewish communities in the World. Until Nazi times, they were prominent in Iraqi society – in BBC’s words, it is incredible how such a people was destroyed in so short a time, havign being such a part of the construction and development of the country over ancient and recent history.

One sad omission referred to the 1941 massacre of over 600 Jews in Baghdad. It is commonly known, supported by official documents and personal stories, that the British Army surrounded the area of the massacre, and ALLOWED it to happen. Much as Sharon was found to have allowed Shatilla and Sabra to happen, and the Canadian UN forces a massacre in Bosnia.

But we British don’t like talking about such things, do we…..