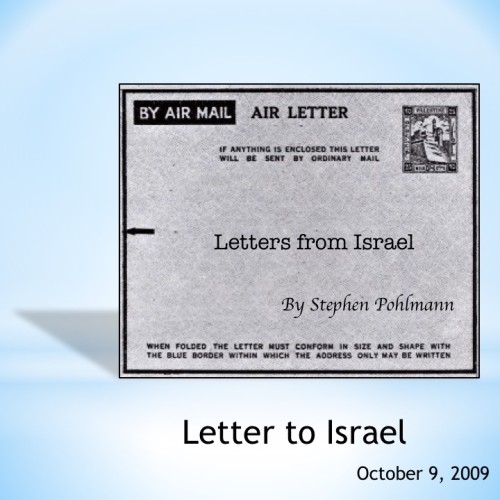 Hi Stephen, haven’t heard from you for a while. Isn’t anything interesting happening in Israel?

I decided to check for myself, considering we get so little news over here. What we do get seems so superficial. Even hesitate to say that many articles appear to be written by someone who’s either scared of the Islamic World, or is paid by them.

I’ve been glancing at your 2 English-language newspapers lately. The Post seems quite balanced, but then when I see Ha-Aretz, it’s obviously more left-wing.

Read that the Muslim population takes up around 1/4 of the World’s people, and that 60% of them are NOT in the Middle East. Wow! Like in all religions, in all walks of life, there are the extremists. Trouble is that the silent majority of Muslims appear to be actively silent, clearly happy that they have become such a powerful presence in recent years.

I knew there were Muslims in Israel; you’ve often told me that they take up around 25% of the population, a fact that always surprises me. Seems they’re becoming more militant – and more ‘Islamic’. Is it really true that they’ve started denying the existence of the Jewish temple where now stands the Dome of the Rock.

But everyone knows that that’s a lie. Just like Ahmadinejad’s Holocaust denial. Be careful of that. It’s not so much that they’re changing the facts; more that they’re ‘creating a popular fashion’, knowing that there are many out there who love Israel-bashing.

In transit at Bucharest airport. Had coffee at same table as a very nice guy. Dutch/Canadian, working for IBM’s military intelligence and technology division. He covers Europe, Africa and the Middle East. Can’t wait to visit Israel.

He says UN and EU are learning the meaning and importance of unity – he’s breathing a sigh of relief that the Lisbon Treaty is going to be ratified. It takes them so long to make decisions. They pride themselves on achieving some important strategic position, when Israel has usually ‘been there and done it’ years before.

When we got on the subject of the Islamic expansion, and my criticism that so many countries, now criticizing Israel for it’s immigration policies, will one day wake up to some earth-shattering facts, he smiled knowingly and told me to check out ‘esdp 2025’ on Google. It appears there’s been an enourmous leak concerning the European Security and Defense Policy and what has been decided will happen in 2025.…

I see there’s more rioting on the Temple Mount. Seems to have started with stones being ‘mistakenly’ thrown by Arabs who thought that a group of French tourists were Jews. So that, I wondered, it’s OK to stone Jews, but not French tourists…Seems a shame that Jews are not accepted on the Temple Mount, the location of the Dome of the Rock. When I was in Israel, no one stopped me, a Christian, from visiting the Jewish Wailing Wall.

Those 2 places are joined together like Siamese twins, yet they have such blatantly different rules. (It’s incredible to remember that, before ’67, the Wall was closed to Jews, yet after ’67, the Temple Mount, now in Israel’s control, was actually handed over to the local Muslim authorities. Still the incite).

There’s a lot written in Israel about the ‘Goldstone Report’, the UN report on the Gaza offensive. At first, when I read that Richard Goldstone was a well-respected (Jewish) S. African judge, I suspected the report would be biased in Israel’s favour. Either way, there was potential for controversy.

The report proved to be very critical of Israel, and only small reference to Hamas’s wrongdoings. In fact, hardly any reference to the many years of bombing from Gaza. That’s subjectivity if ever I saw it.

Fact is, of course – you know it and I know it – that Israel DID rather overdo it in Gaza.  But it’s the disproportional criticism that your papers are screaming about. And I see their point.

If Israel’s guilty of war crimes and/or crimes against humanity, well then, so are so may others, including of course, the Palestinians. Just about every war that has occurred has been made up of actions that fall into that category. American today and the Allies of yesterday are far more guilty of such crimes than Israel. And the French in Algeria, Spanish in the Sahara, British in India, Africans in Africa, Sikhs against Hindus, Hindus against Muslims, Muslims against just about every neighbour they can find.

(Whoops, sorry about that; I got carried away). But there is so much hypocrisy in all this. Did you see Goldstone being interviewed by CNN? He asked why a Jew can’t criticise Israel? What a dumb questions, I thought to myself. Jews are often the first to criticize their own beloved country. It’s the fact that he’s forgotten the meaning of the words ‘fair’ and ‘balanced’.

By the way, congratulations on yet another Israeli Nobel prize – Ada Yonath sharing the Chemistry prize. And I had read that Israel was actually expecting a prize on one of the other categories: physics, I believe – and literature. Well, you can forget the latter. The Scandinavians are very anti-America-Israel right now – you should know that. So no chance for the likes of Philip Roth or Amos Oz. The current winner, Rumanian-German Herta Mueller was an easy winner, writing as she did about the oppression during the Ceaucescu times.

Only now was I reminded of Tel Aviv’s 100th birthday. First, Austria subsidized the performances of ‘Alma’. I saw the original production when it appeared in 1998 at the Vienna Drama festival (and 8 consecutive years following). What a great theatrical experience, following the life of Alma Schindler, who either married or had an affair with just about every important man of culture of her day, including composer Mahler, artists Klimt & Kokoschka, write Werfel and architect founder of the Bauhaus movement, Korbius.

I had never seen a ‘polydrama’ before – giving me a choice of ‘getting involved, constantly being given the choice of following one of 5 story directions, ending up seeing only perhaps 30% of what was going on – and still being utterly entertained. Great stuff. Did they also have a banquet for the audience in the middle? (Stephen: Yes – the whole exciting event lasted almost 5 hours).

And Belgium donated the laying of a flower carpet in the Town Hall square, just like they do every year in Brussels’ Grand Place. That must have been fantastic.

Finally, just want to say one thing about Obama’s attempts to get things moving in the peace process. I admire his dedication, but fear that, as with many of his other ‘attempts’ he’s going to fall flat on his face. Even I have noticed that, as long as the Palestinians are battling each other, there’s really no one to talk to.

There, I’ve done it. Your letters inspired me to make more effort in understanding what’s going on. But, sorry Stephen, I just don’t have the time to spend, surfing the Internet for information. I’ll just depend on your letters, knowing that they favour the Israeli point of view, but also knowing that you lot would grab peace if it were honestly offered to you.