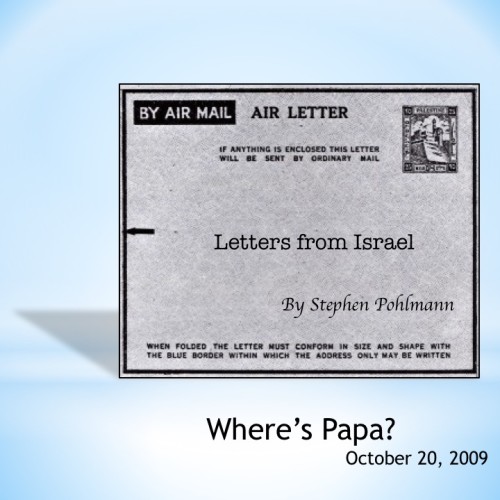 By the time I finish this, I SHALL be in Israel. So, technically, it’s still a letter from Israel.

Let’s go back to the ‘raison d’être’ of my letters.

Among the things my Daddy taught me was tolerance. Believe in people, give them a chance, don’t pre-judge. And if you have an opinion, try to check the story out first. Don’t spew criticism without knowing some back-ground.

OK, I’m human. I have fallen into that trap, too. But I think I’m man enough to face the jury in those cases of hypocrisy. Doesn’t make me wrong, nor any the less qualified to write what I am now writing.

I believe Israel is getting the wrong end of the stick. I believe many observers jump to the wrong conclusions about Israel – without having the knowledge, the background, to be able to make the kind of criticisms of Israel they are making.

And I believe many decent people, intelligent observers, are falling into the trap laid by ignorance, unawareness (is there such a word?) and downright liars such as Holocaust deniers and anti-Semites. (Not anti-Semitic, they say, only anti-Zionist, anti-Israel. For the 1% guilty among you, they are all the same).

I hope you are still reading this.

Perhaps my hope that the Palestinians (Kurds, Armenians, Catholic Irish, Native American, all deprived and oppressed of this World) will also find peace and stability will calm your fears that I am somehow extremist. I pray for the day when not only Palestinians in Israel (we sometimes call them Israeli Arabs) but those next door will live peacefully in their Palestine.

So to the Holocaust.

It is NOT the main reason why there should be an Israel. (Obama is one of many who make that mistake). Many overlook the fact that the Jews have been praying for a return to Jerusalem for thousands of years, since long before Mohammed and Jesus walked this Earth. When there were few Jews in Israel (Palestine) it was usually because they had been thrown out by yet another colonial force.

But the Holocaust IS the straw that broke the camel’s back. So often I hear the cry “why do we have to carry the guilt of Europe on our shoulders?”. So much for friendly neighbours, or fellow-members of the UN. So much for the tolerance my Dad preached.

Last night, I was the guest of Ahmed and Leila (I have changed the names to protect their identity, and to confuse you a little, in the same way some of you appear to be confused from reading your favourite newspaper). Ahmed and Leila are Jewish. Ahmed (the husband, to reduce the confusion), was a child of the Holocaust. Until recently, he kept his story to himself. Those around him were aware of his suffering, but did not push him to open up. It had to be his decision.

The increase of anti-Semitism and Holocaust denial finally forced Ahmed to come out. He now occasionally gives talks, to the congregation, to the young, in order that they are aware, that they do not forget, that they perhaps learn from his experiences. Will they learn? Being human does not help.

This is an extract from Ahmed’s story – in my words –

We were Poles living in Germany. So we were German. But not Papa. As were quite a few others, he was considered ‘stateless’. In the early 30s, he went through the farcical process of being expelled across the Polish border, only to be refused entry – he could not prove his Polish identity. He was sent back.

This went on for days.

He finally decided to escape, ending up eventually in the UK. War was then declared.

We, Mama, my little brother and I, were stuck in Germany. I was 9; my brother was 6. Papa. we later found out, was interned in the UK, as were all such suspect Aliens. We were Jews in Germany. (A reminder: my real name is not Ahmed).

It was August 1939. We were first sent to Riga. There was a large Jewish community there before the war. In order to make way for German Jews (did that make us any the better), 30,000 Riga Jews were taken from their homes, shunted to the nearby forests, and exterminated.

Almost 2 years we were there; Jews from all over Germany. Luckily, a teacher was among those sent from our home town. We had basic education. And Mama was always there to give us love.

In mid-1941, they started moving us to labour camps. We became useful, for we specialized in repairing rail lines, constantly being attacked by the Allies. Labour camps were not death camps, but deaths there were. Every day. The weak, the sick, the ones who lagged behind, the ones who happened to be in the wrong place at the wrong time. I often witnessed the beatings, the shootings. I saw, I turned away. Perhaps I grabbed my mother’s hand, but that too was dangerous.

Mama was young then. Quite fit. So she survived the ‘draft’. She went to work. My brother and I were left behind to …do nothing…just be there…wait…watch. One day, I was old enough to work, so I joined my mother in the labour gangs. My brother stayed behind.

One day, when we returned at dusk, the few kids left behind were gone. My brother was gone. A truck had come to take them away. Normally, the Germans wrote everything down; their records were impeccable (and still there are deniers). But we never found his name anywhere. We have never closed that chapter.

We were moved several times. We were sent to Stuttfhof, an extermination camp. As the end of the War drew near, we were moved again and again. For some reason, we were still considered useful, valuable. We were returned to Stutthof. My mother and I were still a team. And again we were marched away, perhaps 5,000 of us, this time into barges. Tugs pulled us from dock to port and on. Night trips, at sea. We became sardines; some died.

And above us, the Allies flew. We heard bomb attacks. We saw dogfights. But we had to continue suffering, hope not yet in our vocabulary.

One night, the tugs abandoned us. A few brave and strong among us started ripping up some boards, creating makeshift oars, and got us to shore. Many of us were able to jump ashore. Many were too weak. But where were we? No buildings, not even a moon to guide us. Not far from the beach, the Germans returned. They beat some more, shot many and marched us on.

Some time later, we stopped, we thought to rest. The Germans left us, and this time, they never returned. There was silence, emptiness, confusion. Tanks approached. Our first sign of freedom was the German officer on one of the tanks. He was stripped of his weapons and insignia, his hands raised, the American’s pistol clearly in view behind him.

We spent most of the next year back at one of our camps. But this time, we had freedom of movement, we had some food, and we wore other-than-striped uniforms.

We entered our names on the lists being collected. In those pre e-days, information was not so speedily gathered.

In England, Papa also entered his name on a list.

It took about 6 months for our names to be linked. It took until August, 1946 for us to board a ship and sail to Dover, and then on to Victoria station. 7 years since Papa had escaped. I was now nearly 16, a man. But Papa was Papa.

Mama’s grip on my hand was bringing tears to my eyes – or was it the imminent appearance of Papa..

We alighted the train, with many hundreds of others. There were several exit gates. I am not so small, but still I kept hopping up in the hope of seeing Papa. We rarely hugged when I was young, but surely he would hug now. Would I let Mama hug him first…..

I couldn’t see him. Nor could Mama. He HAD to be there. The letters and telegrams guaranteed that.