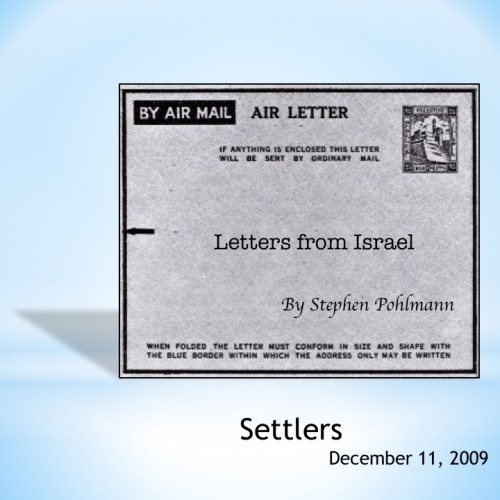 Hi Everyone – at least those of you who honestly take the time to read these things. I really do appreciate being appreciated in these days of overwhelming email traffic. Who needs it all…

I’m sitting here with the sea at my side….. 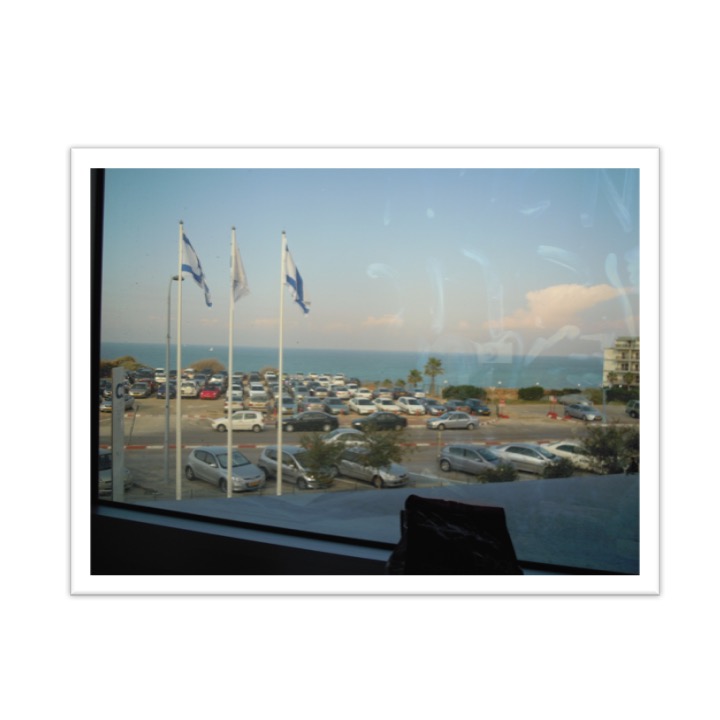 …and a replaced knee below me. (I do have a photo of the wound, but pornography is not my thing). 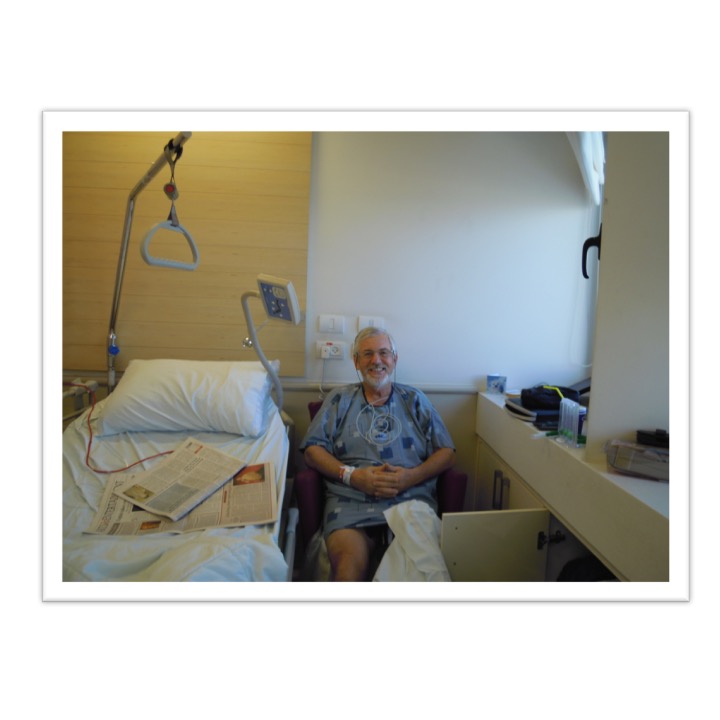 Had the op. Monday morning (really early) and am now rehabilitating. I could do without the neighbourhood. Some rooms have just 1 bed; this one, 2. For 2 days, I had this guy who was 170 kgs and was suffering from whatever. He is forced to sleep on his back, and trumpet ain’t the word. The first night, I just suffered. The 2nd, I moved and got some sleep.

Otherwise, before you ask, all is going as good or even better than the doc expected. I’ll be out in a couple of days.

Here’s my 3 favourite visitors, Aviva, Shira (with the flower) and Eliana. (and that’s half of Rachel on the left – one of Aviva’s 2 wonderful sisters). The flower is a rose from our roof garden – what a scent…. 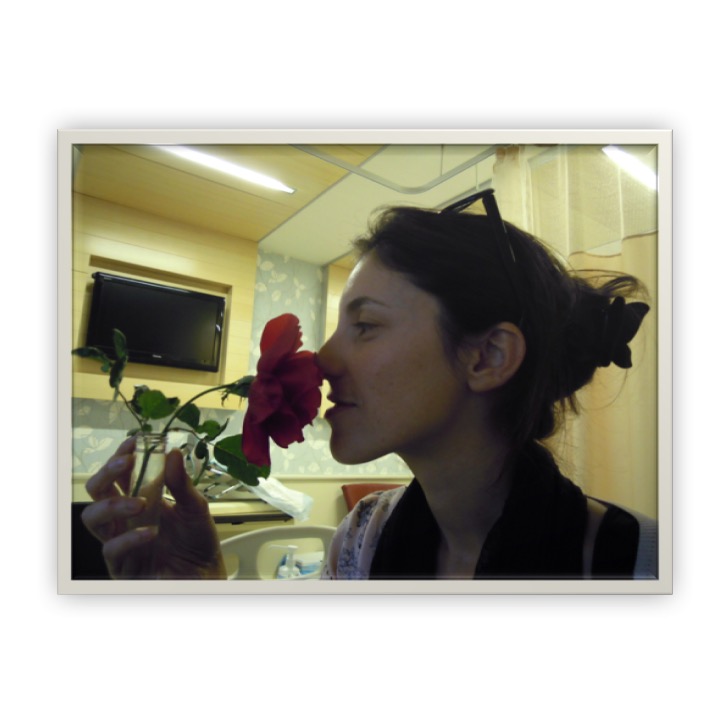 Today is the first day of Chanukah. Not good (as far as celebrations are concerned) that I am here.

Happy Holiday to you all.

On Thursday, the 9th Israeli (first woman) was awarded the Nobel Prize. Need to remind you, as Obama may have blinded you, that Ada Yonath shared the Chemistry prize with 2 Americans. (In fact,. She was the only non-American to win a Nobel Prize this year. Can it be that politics is inching into the system, or are we just that clever?).

In this letter, you will notice the wolf in this sheep’s clothing. I’m becoming a little frustrated at the naivety of left-wingers amongst you, and hypocrisy for most others.

What brought this on?

In yesterdays’ Jerusalem Post (the weekend edition – we have no papers on Shabbath), they included a wall calendar – here it is on my hospital bed….It states the ‘Universal Declaration of Human Rights’ adopted by the UN on. Dec 10, 1948. It lists all the articles.

It is put out by the Office of the High Commissioner for Human Rights, with office in thus area in Ramallah and Gaza City. The Jerusalem Post has a little front page ad. which declares its status vis-à-vis the insert, just making sure no one thinks there’s any connection. I would not have worried so much about it.

Have you (has anyone) recently read this fine list? Perhaps the only country that could honestly say to themselves that they follow every article is Jehovah-Witness-Land. Oh, that doesn’t exist. My mistake. OK, so where does that leave us? With no countries.

Next, they should run a poll of all countries and try to get honest answers a) of what the people honestly want and believe in , and b) which articles they have, in practice, been able to achieve (2 totally different results, of course).

They just won’t let us. They never will.

I have some examples to back me up.

I just went for my slow walk up and down the ward. I ventured out of the ward, where the lifts are etc. There, seated, were 4 Arabs. Presumably ‘Israeli Arabs’, although they usually prefer to be called Palestinians. They seemed out of place in this private hospital. I refer to their apparent lack of ‘affluence’ – nothing else. I greeted them politely. They all greeted me politely – Salaam aleikum, aleikum salaam.

Shall we try to repeat this in an Indonesian, Jordanian, Saudi, Egyptian, Gazan private hospital – just with the roles reversed? Hmmm, I thought not.

On Monday, Ismail Haniyeh will lead the celebrations in Gaza City of the 22nd anniversary of the founding of the Islamic Movement. (How many foundings do they need? I though Mohammad’s was pretty effective). He has promised surprises. Oh good, I though, he’s going to start liking us. Destroy the missiles they have been stockpiling that can hit Tel Aviv. Create an atmosphere that can make us consider leaving the West Bank. Start creating that BAD (Build another Dubai – OK, Dubai’s in trouble, but it still has a better future than Gaza).

And then there’s the Settlements.

First, a little thing – the British Dept. of Environment has issued instructions to stores that product from the West Bank must be marked in such a way as to separate produce from the Arabs and from the Jews. Forget about Tibet, Chechnya, Kosovo, Bosnia – how about Gibraltar, Falklands and Northern Ireland….

Hey, my English friends, you’re taxes are paying for this ultra-important move…

On Wednesday, 30,000 settlers and supporters gathered in Jerusalem for a demonstration against the freeze (the stopping of West Bank building – with conditions, of course). They cleverly avoided incitement. No pictures of Netanyahu wearing a keffiyeh or being compared to a Nazi. (That’s what was the case 14 years ago when a few of Netanyahu’s ‘distant supporters’ did just that with pictures of the then PM, Rabin. And you all know what happened next. Not only did they kill Rabin, they lost support. Be careful, Americans….criticise Obama, but don’t open the door to a repeat of tragic history).

There is no question about 2-3 facts:

Palestine should be where Jordan is. We’ve been through this enough times. The British and French never were the best of colonial organizers. (Aviva’s currently attending a series of lectures on African history. The Belgians were perhaps the worst, but the British and French, the Portuguese, Germans etc. were not far behind. We just can’t seem to avoid destroying other societies).

But, once the decision was made by the UN to divide the area as they did, that should have been it. Some naughty countries said no to that democratic decision. (Had they not read the ‘Declaration of Human Rights’? Oh, it had not been written by then. Well, that’s OK then).

During the occupation (1948-1967) Jordan, that centre of Human Rights, destroyed just about every synagogue in Jerusalem. So much for religious freedom. (Switzerland’s the first country to remind us of that naivety and hypocrisy – except Israel of course, which even has a Mormon University in its capital).

The surprise I want from Hamas, and from the other ‘moderates’ in Moslem society is to suggest that the Jews/settlers/Israelis STAY in the West Bank and become welcome members of the future Palestinian state. Just as we have opened our arms to the Arab minorities in Israel (23% of them) and the Russians, Ethiopians, Moroccan etc. etc., so they too could do the same.

If there’s going to peace, what’s the problem? If Israel can have such a status during war time, can you imagine how wonderful it would be during a time of peace?

Why has not one Arab suggested this? Why does an Arab state have to be ‘free of Jews’

And why does the onlooking World fall for this? Which potion have you been drinking?

I see such good friends of mine, decent, intelligent, knowing.. I see them start to shake when the settler’s are mentioned. They see American religious families defending a belief they’ve had for millennia. Not politically correct, perhaps. Not diplomatic, perhaps. But for so many to fall for the aggressive and non-compromising reaction of the Arab world is sad, and so misses the point. That support continues to give the Arabs the enthusiasm they have for basically wiping Israel off the map.

After the experiences of the retreats from Sinai, southern Lebanon and Gaza, would YOU give them your next-door neigbourhood and half your capital?

Read those Articles from the UN. Be honest to yourselves for once. And realize that nowhere are the words ‘hypocrisy’ of ‘naivety’ mentioned.

Now, where’s my eraser and pencil….