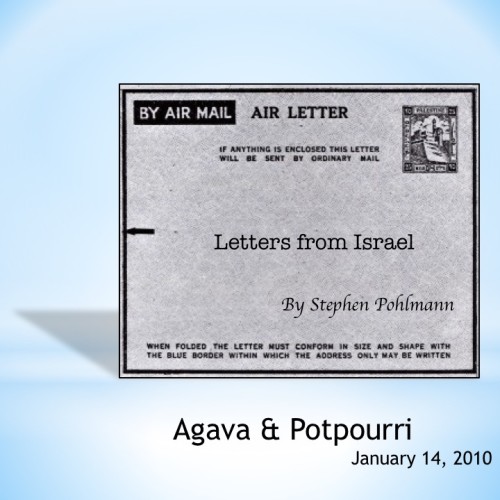 How can I write stuff about Israel, when the media is full of the horror of Haiti? Wow, this is certainly a lesson of how ‘life goes on’ in our own little world.

I make a cup of coffee…how many of the survivors have that luxury.

As with many countries, Israel has already sent some teams to Haiti, and has more at the ready. Unfortunately, Israel is well-experienced in disasters, although less of the ‘natural’ type..

Turkey is a country that has also had some horrible disasters, and again, Israel did not hesitate to send many teams to help; they are among our closest neighbours. They are also supposed to be among the friendliest of neighbours. This is a country that is (was?) trying to get into Europe – become part of the ‘western alliance’, whatever that means nowadays

Perhaps you will not have read about the current spate between our 2 countries. After the recent military exchanges with Gaza, (they started firing rockets again, we retaliated ‘disproportionately’ – because we got 3 of the guys who fired the rockets – that’s disproportionate), Turkey criticised us. And this was their PM, with quite ugly words. (Has he/have we forgotten so easily how Turkey is dealing with the Kurds?).

Israeli and Israelis were furious. Yet another case of Israel-bashing, and he gets away with it? So Danny Ayalon, our deputy Foreign Minister, calls in their ambassador and, diplomatically, insults him. Makes him wait outside the door for a few minutes, then seats him on a ‘lower’ sofa opposite 3 ‘higher’ seats, and with only the Israeli flag in the table in between. Diplomatically wrong. Morally? Hmmm.

So the Turkish PM gives an ultimatum that they will withdraw their ambassador if no apology is received by Wednesday evening. We apologised.

I would have offered First Class seats in El Al.

Well, I suppose diplomacy, i.e. the form of behaviour within the realms of the UN etc., is all we have left when arguments are rife. But when was the last time there was diplomacy on the part of Israel’s adversaries?

Did you hear about the 3rd Lebanon War? Early in 2009, Lebanese media attacked Israel for claiming that hummus was an Israeli national dish, like falafel. (Of course, it is not. Its sources could perhaps be traced to one country, but nowadays, it’s Middle Eastern at least).

They decided to break the Guinness record for the largest dish of the stuff, around 2000 kg. Well, you know those Israelis….I’ve mentioned before the Israeli Arab town of Abu Ghosh, set in the Israeli hills, and one of the best examples of Jewish-Arab co-operation and co-existence. Well, they got their Jewish and Arab cooks together and, officially, doubled the record last week. 4,090 kg. to be precise, as see here…. 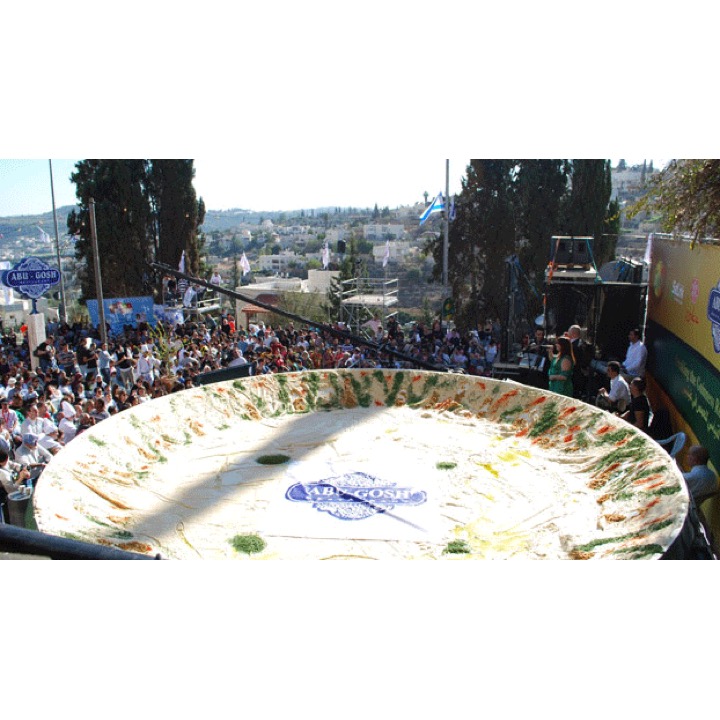 That’s over 9,000 lbs, or 4 tons. They borrowed a local satellite dish, over 20 feet across and, watched closely by a Guinness representative, put in all the necessary ingredients to make the stuff edible. (They’re still eating it…)

And another war erupting? Hamas says the Egypt ‘has declared war on us’ after the violence of last weekend on the border (1 Egyptian soldier killed, many wounded on both sides) in protest against the construction of a REAL wall between Egypt and the Gaza Strip. (This is a physical, metal wall, dug deep into the ground, in an attempt to reduce/eliminate the hundreds of tunnels that exist).

And now, from diplomacy to democracy. Let’s try to imagine something. Some of you will have heard of Nick Griffin. Chairman of the British National Party. They have so far NOT received any seats in the Houses of Parliament, but he did gain a seat in the European Parliament. Or Geerd Wilders, Chairman of the official Dutch ‘Party for Freedom’. Now these are ‘worrying’ voices, for they often spout words which may sound wrong, but which we ourselves usually agree with – privately.

OK, now imagine a political party, with several members, who are allowed to spout what you would undoubtedly call ‘hate’ and treasonable’, and you have the Israeli Knesset. The Balad Party is just 1 of 3 Arab parties we have here. (The current 13 Arab members are actually split between several parties).

Azmi Bishara was thrown out of the Knesset for having allegedly spied for Hezbollah during the Lebanon War). His replacement as the head of the Balad party is Jamal Zahalka, who is a blatant anti-Zionist, and consistently screams abuse, both in the Knesset and in the media against the country that gives him the right to do so.

Being Jewish and being a democracy does sound a little like a paradox. And it is, but then, far less so than most of the countries in this world of ours. With members of our parliament like this, who needs enemies?

There are calls again for something I personally feel would have solved the Palestinian problem years ago. Set up a joint federation of Jordan and Palestine. Since those days, Palestine has become Gaza (Hamas) and West Bank (Fatah). So now the proposal is for the USJ – United States of Jordan – which would be some kind of co-operation between those three.

It would include concessions from Egypt and Israel, as set up in what was called the ‘Geneva Agreement’, which would help the Palestinians have a deep-sea port, better land connection with the 2 entities etc. Compromise. That’s got to be the way forward… 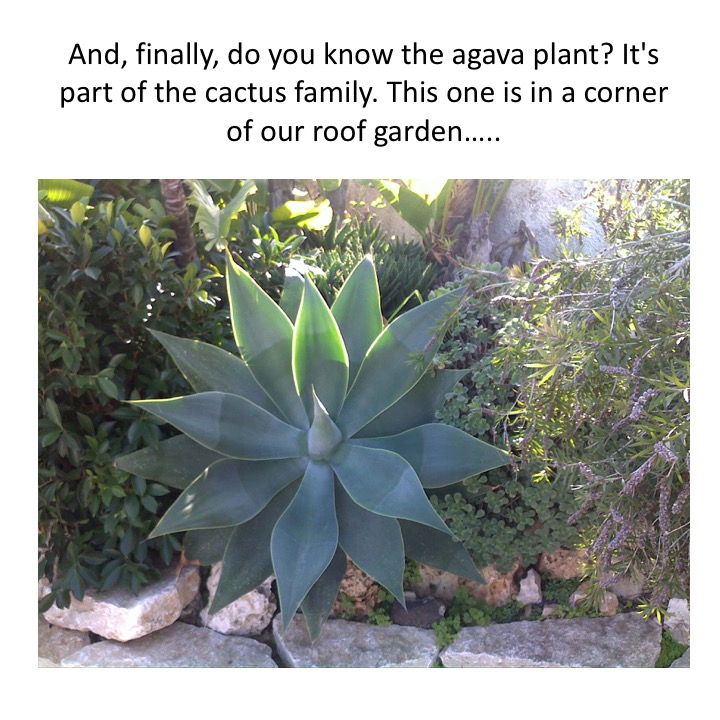 It is one of the children of our ‘first’ agava, which we named ‘Magnus’. When Magnus was about 11-12 years old, something spectacular happened…the centre part became a feast of flowers (see next page), ever growing longer, higher, until, under gravitational pressure, it curved back down. The length reached perhaps 4 meters, along which there were thousands of little yellow blossoms. As some were born, the others died. 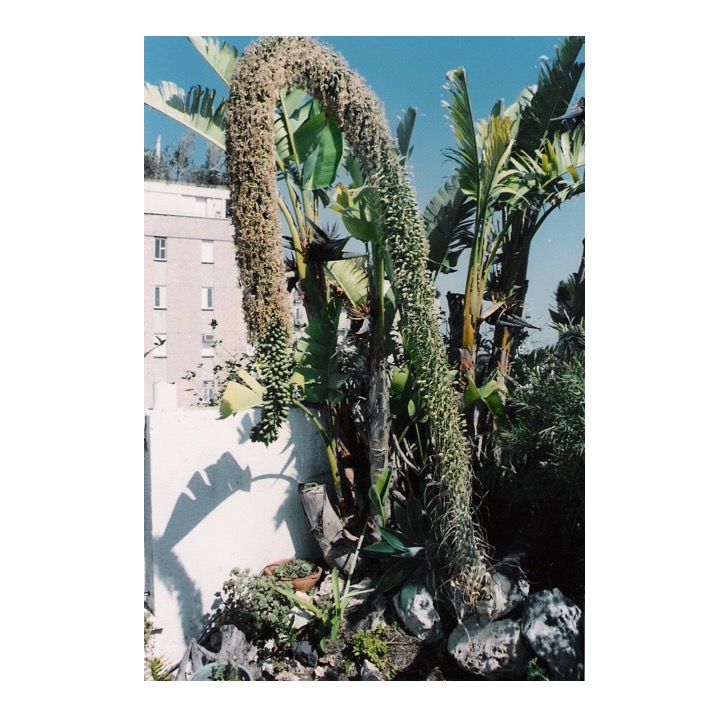 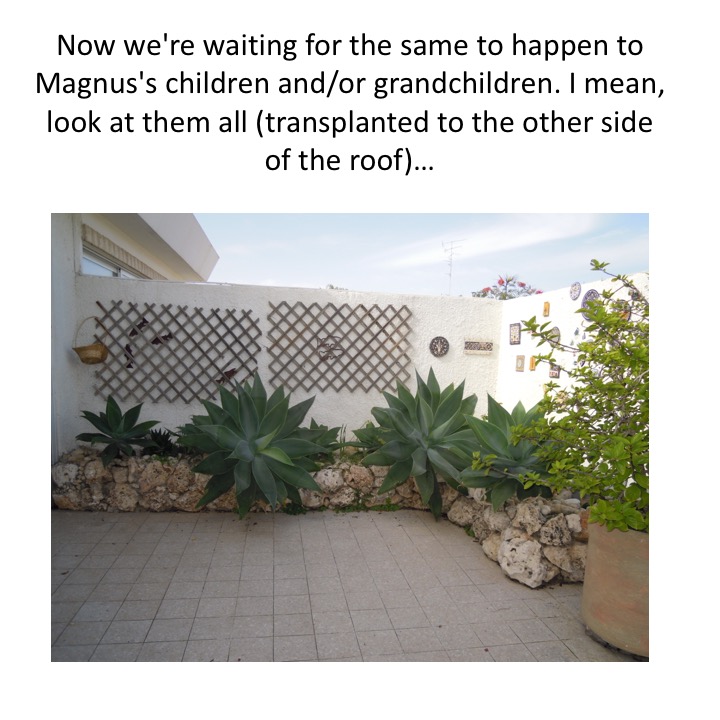 There are perhaps 40 of them, down to the little babies…

Just to give you more of an idea of what is happening, I discovered an agava blossoming in our neighbourhood a couple of days ago (and this goes on for months).

I took some pics… 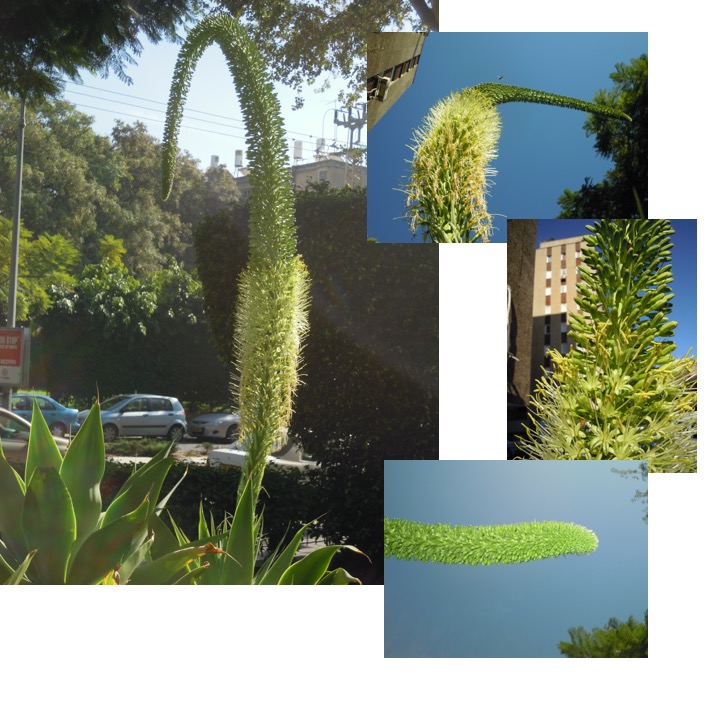 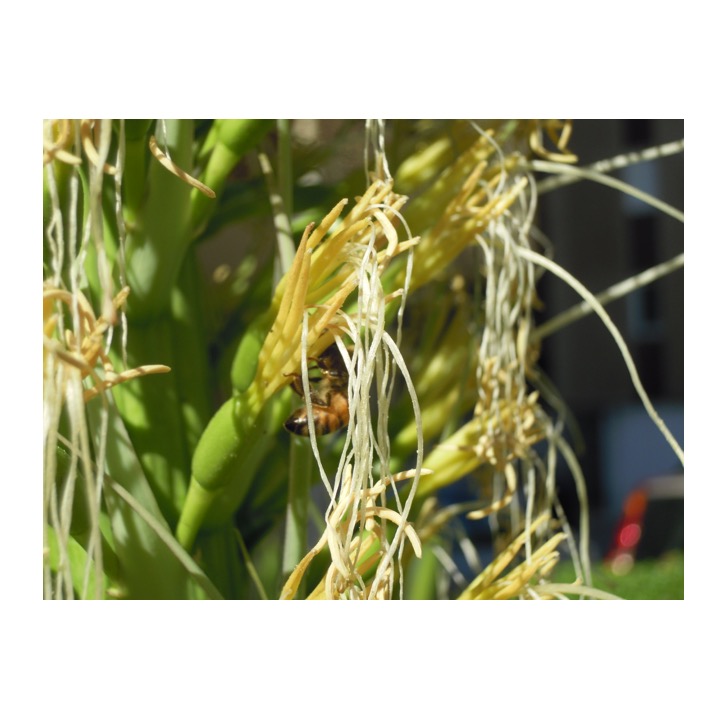 Look at the close-up, and how the bees just love it!