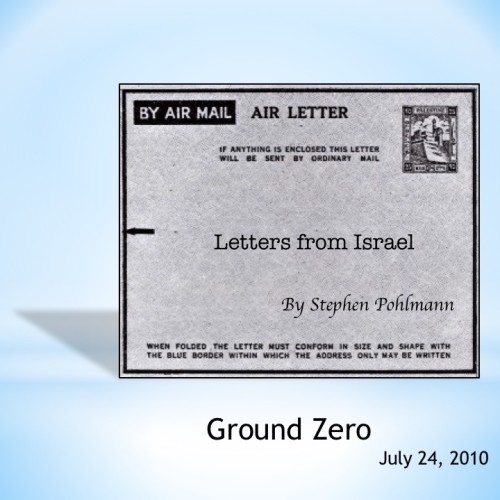 I expected/hoped for more reaction to the dilemma facing Israel re the Gilad Schalit case, but, and I am not surprised, it may be an interesting story, but it is NOT of interest to the people ‘out there’. They have their own problems; this does not affect them.

But the ‘Mosque at Ground Zero’. Now that is something to which everyone can relate.

One friend was ‘sceptical of all frantic statements and I really don’t think I am being naïve or politically correct. I need to check it out. It isn’t correct just because it appears on a sign held up at a rally’. By chance, we’ll be meeting soon; first opportunity to sit and chat with them directly.

Another wrote ‘Maybe it’s time to drop the political correctness and simply say No Way’. He mentioned the several countries (e.g. France, Belgium, Switzerland) who have started making moves, albeit small, against Islam. His own country, Australia, was ‘thinking about it’, but the current PM is against it. (There are elections soon…)

And how about this:

Where are you in this?  What are your feelings about a Mosque at Ground Zero?  You are forwarding other people’s responses.  What is yours?  It doesn’t matter whether it’s right, left, right of centre, left of centre, moderate, … put aside the critique in your mind – what is your feeling/response?

I have noticed that, in recent years, the meanings of Left, Right, Centre have been fluctuating incredibly. Of course, it depends on the country in question’s politics as well. But that’s just a small part of it.

The number of times I heard Arafat referred to as moderate often changed my tears to laughter. The ones who used the term didn’t realised that the main reason was not that Arafat had started talking about peace (while still pressing the button), it was that many had become so much more extremist than he. That’s all.

‘Political correctness’ has become the favourite phrase of many. I won’t even go into what it means, as that’s just a load of splashing around.

The mosque at Ground Zero – where do I stand?

For so long, Islamic extremism has not only been raising its ugly head, it has become the image by which most of Islam has been identified. You don’t need me to tell you that a very high percentage of ‘problems’ in this World (where Muslims exist/reside) at least involve, if not are initiated by Muslims. It can’t be denied that ‘something sinister is going on’.

But there are almost 1.5 billion of them. They can’t ALL be like that, can they? Of course not, we all respond.

Then we ask, I ask, well where is the silent majority of Muslims? Why don’t they speak out more against what’s happening? A few do, but there is no apparent Islamic movement against terrorism.

(Recently, there was a horrible bombing in Uganda, killing many who were watching the Mondial. Somali Jihadists claimed responsibility, in retaliation for Uganda’s support for the government in Somalia against the local Islamic rebels. The Jihadists’ public response to international criticism? ‘We are happy at any suffering by those who oppose us’. We read this, and we move on. But this is what is also happening in the name of Islam).

We do know that many Muslim states are fearful of the Jihadists. There’s the danger of the Muslim Brotherhood taking over in Egypt, the royal family being overthrown in Saudi, there’s the battle between Fatah and Hamas among the Palestinians, civil war in Lebanon, the ‘democratic ‘ elections in Algeria which brought the Jihadists in and started their war, rumblings of war in Yemen, war in Sudan, Ethiopia, Eritrea, Indonesia, and I haven’t started on Europe.

Yet I said yesterday to Aviva, after all our hopes that the silent Muslim majority must do something, shouldn’t we give the Cordoba House project a chance (the organisation that is building this complex in Manhattan, claiming to be a movement bring Islam and the West closer to each other etc. etc.)? Are we facing a future of conflict, or is there a chance of peace between the 2 communities?

I was on the side of ‘giving them a chance’ to open the doors to live side by side, to make amends for 9/11. (Despite the fact that, 30 miles south of here, in Gaza, women are now not allowed to be at the beach with any man but their husband, are not allowed to go to a male hairdresser, nor are allowed to smoke the nargila pipe. Sharia law is coming to a neighbourhood near you).

Funnily enough, I did also use the word ‘integration’. But the more I think of it, no one really believes that integration is their wish.

I then watched Pat Condell’s monologue, and a big part of me agreed with him.

I want to ‘give them a chance’, I want to believe that things will work out for the better, I want to be politically correct.

I don’t want conflict; I’m basically a pacifist; even a coward.

But (and this shows how many of us are politically swinging from left to right of centre and back again – never extremist, though) I have seen the threat from Islam to my way of life – to the ways of life of many.

The norm is not to do anything, to let the other worry about it.

But there comes a time when you have to stand up and say ‘no’. I believe we are getting close to that point of no return.

Our lives change only a little each day. But take a look at the last 20-30 years, compare it to other such periods in history, and I believe you too will start worrying.

Live here in Israel, on one of the frontlines, and the effect is quite dramatic. (And we happen to be one of the most tolerant countries to Islam in the World. Want me to repeat that? Come and see for yourself how the 23% Muslim population of Israel live).

My simple answer? Let me think….I want the Cordoba project to set an example of political correctness. There! I’ve used the phrase. I want them to cancel the Manhattan project, sell the building to developers (for apartments/offices) and move their project to…somewhere decently distanced from Manhattan. Death Valley is overdoing it. And I’d inaugurate it on ANY day other than September 11.

PS – Now what if the good old Israeli army would locate Gilad Schalit, launch a surprise rescue attempt, perhaps get him out at the cost of several deaths and injuries on each side. 3 movies came out within months of Entebbe (check it out on Google in case you’ve forgotten). We’d sure gain some friends….