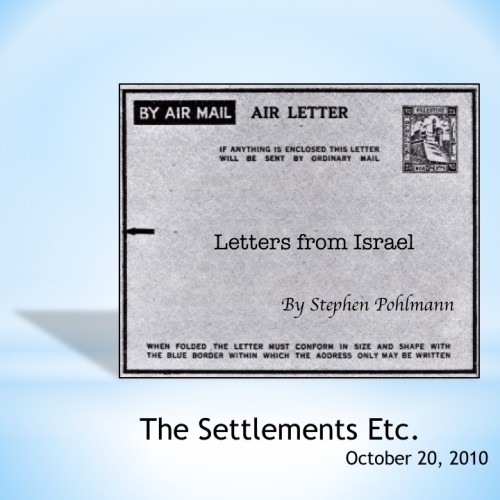 I’m trying to start a campaign focusing on ‘equality’, ‘fairness’, ‘proportionate responses’ etc. If Palestinians, Arabs, Moslems can be an intricate part of Israeli society – as they are, to the extent of around 23% of the population – then why can’t it work the other way round. Political correctness demands that the Palestinians put such an offer on the table.

(And this is really the only option open. Like it or not, the consequence of the many Israeli-Palestinian wars is geo-political and demographic change. There’s no way that 60,000 people are going to be uprooted from their homes, let alone 300,000).

What a silly man…Now he says that the Gazans are in a cage, and must be part of the peace negotiations. For the 1% among you who perhaps have forgotten…There are currently 2 Palestinian enclaves. One, in the West Bank, Fatah, says that they are willing to accept Israel’s existence. The other, in Gaza, Hamas, does not. It’s that simple.

Which of course makes Mr. Carter simple. Or am I being facetious. It’s not that simple?

Israel is learning what everyone knows. The human being easily forgets the lessons of the past. By the Jewish calendar, it is 15 years since P.M. Rabin’s assassination. By the other calendar, it’s November 4th. I already wrote at the time, when within a year, his Labour Party was thrown out, that even in Israel, he was too quickly forgotten. Arafat really missed his chance with Rabin. And the fanatical Israeli right killed him, because he offered too much.

Perhaps some of you noticed a dangerously provocative story about Israeli politics recently. Immigrants will now be expected – by law – to swear their allegiance to the Jewish State of Israel.

Well, it is provocative – at least in many reporters’ eyes. But the fact is that it is possible to be and have both. Jewish history, whether you focus on 5,000 years since Biblical times, 2,000 years since Roman times and the last time Jews had a nation, a little over 100 years, since the establishment of Zionism and the need to escape persecution, around 80 years and the Nazi times, or 62 years, since the LEGALLY- and DEMOCRATICALLY-ACCEPTED establishment of the State of Israel – Jewish history has shown that there is a need for a Jewish state, a place which Jews can finally call ‘home’. (Yes, just as the Palestinians deserve one, but many will show that their claims do not quite have the same provenance, not desperate need).

And if you want a decent example of democracy, you need not travel further than the Jewish State of Israel. There is no question that there is still much to be done, just as there is in almost every democracy. But every minority does have equal rights. It’s the law here!

Silly man. As far as I know, he’s never been here. Yet another who needs to know before passing judgement (the theme of my most recent ‘Letter’).

The tourist committee of this worldwide organisation (for Economic Co-operation and Development) is having its annual conference in Israel this week. This is a reminder that Israel is a leading player, not only in tourism, but also in the many subjects that surround tourism.  These unfortunately include the science of security, but also the technology that moves people both physically and virtually around the World. I’m not saying that the World would fall apart without Israel’s support, but it would have a jolly good try.

Hapoel Tel Aviv are playing Schalke (Germany) this evening, in the 4th round of group matches in the European Champions’ League. They have no points from their first 3 games. I know you join me in wishing them well.