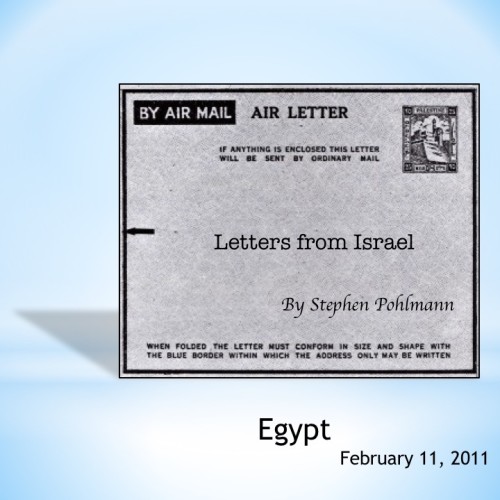 Wow – I am honoured. A few of you have asked for my opinion about the Egyptian crisis.

Who am I to answer – to know. I’m just one of you, who happens to have moved to Israel some years ago, has a family which is about to expand to the next generation, who cares perhaps just that one iota more, that I decide to write this thing.

I only got back yesterday from S. Africa – had a wonderful trip down there, which included seeing the Queen Mary II in Cape Town, and the new A-380 about to leave on its inaugural first Air France flight from Johannesburg. I played tennis below Table Mountain and spent time with the family of the man who nicknamed me ‘Twiggy’ way back in 1968. I gave lectures to oral hygienists and noticed that apartheid has unavoidably left an indelible mark on S. African society. And those who compare Israel to S. Africa, Nobel prize winner or not, are wrong.

I watched Mubarak’s speech last night, and watched the reactions on several TV channels. (We don’t have Al Jazeera on our system). So just some quick observations:

Like Sadat before him, just because Mubarak was ‘a friend of Israel’ does not necessarily make him a nice guy.

I DID read Sadat’s autobiography, which showed that he had been a Hitler-admirer and an anti-Semite. But he knew what was right, what was practical for his country after the Russian benefactor had moved out. He was a clever man, a gutsy man, and sticking close to USA was certainly the right short-term strategy. But he never was a real friend, nor was he a man who fit in with what WE call ‘western ways’. Nor the Shah, nor Abdullah of Jordan, nor Abdullah of Saudi, nor Qaddafi, etc. etc. They’re ALL in danger of failing and falling in exactly the same way as Mubarak.

Big question is how he will fall, who will take over, and where will Israel and the Middle East be tomorrow? Big questions.

When you see the crowds in Tahrir Square, which later today could reach a million, who will guide them? They need a leader. And they’re very leadable. Any spark could create a leader. Look how prominent the Internet has made this Wael Ghonin (see, I did not have to look him up to check….and have you seen today’s Google homepage? Da Vinci-esque….).

What of course worries everyone is that Mubarak is hoping the crowd will be so angry that they will march, almost leader-less, to his palace, some km. away from Tahrir Square, and force the army to ‘defend’, causing bloodshed, and then let Nature take its course.  He’ll pretend innocence, but, by restoring horrible order (as after Tiananmen Square), he’ll find justification to stay in command.

But it’s a predictably losing battle. The question is, is there any chance of ‘what the West considers’ a change for the better, as has happened in most of former Soviet Union, and some of the Far East.

All this time, the Muslim Brotherhood sits and waits. They are there to help the deprived and oppressed , after which they add their ‘little bit of philosophy’.

There are a lot of deprived and oppressed across the Middle East. Happily, Egypt has a large and vocal Christian minority, and a relatively educated student population. Also the Middle class has a voice. These are all who, with the help of the Internet, do not want to move backwards. If the M.B. want power in Egypt, they must be seen to be moving forwards – towards modernity. I really do believe the women of Egypt will be a factor – not accepting any step that will push them aside or backwards.

Israel? We also sit and wait. Well, no….we do not sit. Only metaphorically. This country NEVER sits. We move on with our very busy and daily lives, knowing, perhaps praying, that tomorrow will take care of itself.

Have a peaceful weekend…