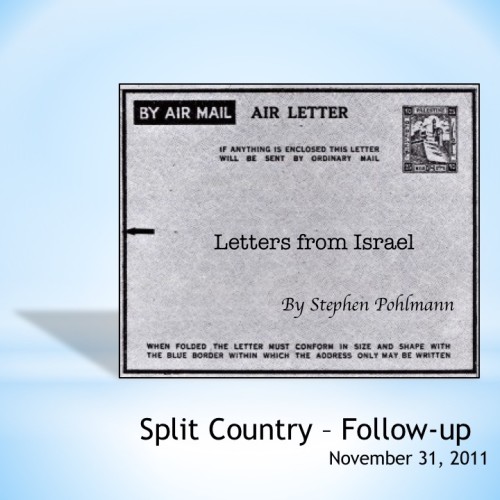 i have no idea how many rockets have been fired from gaza since the ceasefire and i pay special attention to anything israel on or in the news.

i blame israel for this (my lack of knowledge – not the rockets).
that is the war israel is losing badly.

and why not indeed!  So does the rest of the world blame

Israel – for everything.  Jump on the bandwagon!

Yes, I entirely agree with you.

I just get my hackles up when I see those words “blame Israel”.

I have never as far as I recall replied to any of Stephen’s mails but the subject or the prisoner exchange for Gilad Shalit is something I feel very strongly about and therefore have decided to throw my hat in the ring.

Exchanging over a thousand murderers for one soldier is giving the Arabs the encouragement (not that they seem to need it) to carry out further hostage taking in order to acquire for themselves bargaining chips to be used in gaining the release of more of their murderous cousins.

I fully agree with the Shalit family, who really carried out a fantastic campaign that ensured that their son, Gilad, was never out of the headlines. I would have done the same if my son was in captivity, but I firmly believe that Israel has to adopt a firm policy of no negotiation for prisoners of war.

Such a policy, however hard it is for the family involved, is the only way Israel can make hostage taking less attractive. Stephen mentioned that families are crying that the murderers of their children are being released, one of the reasons I am particularly upset with the deal is because my son, who was a captain in the Israeli army, cut short his honeymoon in order to lead his unit in the war started as a result in part of Shalit’s  and two other soldiers capture (the two others were returned later in coffins). My son did not come back from the war, he was killed in action in south Lebanon.

So perhaps you will understand why parents are so upset with the Israeli government’s agreement to the exchange.

With regard to the Israeli PR deficiencies we are not playing on an even playing field. The foreign media is and always will be anti Semitic and this is something we have to get used to. Israel must carry on doing what is necessary to secure its citizens and continue to be a “light unto nations” in the way it reacts with its Arab citizens.

I invite any of you to visit one of our hospitals and see for yourselves the amazing care that is given to Arab patients and how the staff bend over backwards to ensure that they can have no complaints. Arabs living in Israel are treated in every way as Israeli but if an Israeli should happen, by mistake, to enter a Palestinian area on the West Bank he would be very lucky to get out with his life and not be lynched.

I am sorry to have wandered into a number of different subjects. I’ll be happy to hear comments on any of the above.

We are friends of Stephen’s for many, many years, and our families go back to our childhoods.

I sympathize entirely with your mail and in fact feel exactly the same.

I did not experience complete elation at Gilad’s return, but felt glad for the family. However, at the same time I felt terrible sadness for the families of the victims of those terrorists that had been released.

So much of what you have said is exactly what we say.  Ra’nanim for instance is full of local Arabs and, as you so rightly say, would they welcome us into their local malls?  I wouldn’t want to take the chance.  Meir Hospital, another example of our treatment to our Arab citizens.  But unfortunately the world does not see this.

I also agree with your comments about our media.  Unfortunately it is useless to worry about world opinion because, as you so rightly indicate most of the world is Anti-Israel anyway.  We must adopt the attitude of “do what’s best for our country and its citizens” and to hell with world opinion.

Look how the Shalit swap has panned out.  The Guardian in the UK (ok, never one to support us) reported that by theimbalance of the exchange we were showing the world that we think “too highly” of ourselves!!!  Not how humane we were, that theHamas murderers returned looking well fed and with healthy complexions.

No, Israel must not worry about the opinions of the world, even of the Jewish  populations abroad (again, especially in the UK) where their main concern is“integration”, “low profile” (the Milibands are a fine example, the mother evenbeing on one of the “protest” flotillas to Gaza) but look out for number one – Israel!

For you and your family I feel great empathy and we do support Bait Shel Benji.

Actually we were out last night with our very good friends Ronnie & Loretta Harris and it is us that put them into contact with the charity which I know they are strong supporters of.

I’ve reminded Candy that of course she does know you. She hadn’t connected you with Gigi.

I don’t know what I can do now, but for me, this Schalit saga is perhaps the defining moment so far in my Letters. Not directly because you wrote – but indirectly, yes.

I am one of many who feels very strongly about this.

I’m copying this to all Letter recipients. For the couple who have asked NOT to be copied by the responders, I have to answer that I leave that up to the individual. If you feel that your response SHOULD be read by all, than go ahead. The recipient can then make up their mind whether or not to press whichever button. It is good and right when this becomes a bit of a forum or debate.

10 persons killed on Shabbath – (9 were Palestinians whom we believe to have been responsible for some of the 39 rockets and mortar from Gaza which killed a man in Ashkelon and wounded 4.

I am so busy right now, so let me just list a couple of thoughts:

Stephen’s moving to the right. Well, that’s just a label. I don’t think I’ve changed so much since I’ve lived here (27 years) and been ‘associated’ with Israel (38 years). In that time, I’ve seen much of the World, Europe in particular, lurch to the Left. And there is NO question that the ‘fun guys’ are the Lefties.

When someone talks sense, he’s called a right-winger (he certainly MUST separate himself from the real right-wingers who attach themselves to him). Many times, he is not the greatest speaker, with not the best of personalities. He’s easily disliked. They need some believable personalities.

Which is where I came in……