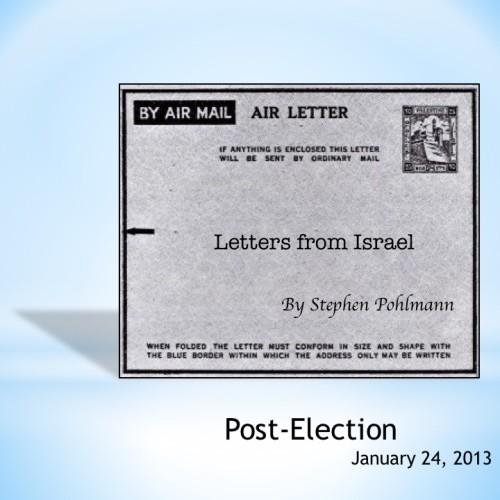 OR – What The Hell’s Going On In Israel?

OR – Who The Hell is Yair (sounds like ‘Career) Lapid?

It’ll have to be bullets again, with clarifications here and there.

Netanyahu’s Likud (combined with Avigdor Lieberman’s Israel Beteinu party) lost a lot of ground (31 of the total 120 seats), clearly because he joined forces with Lieberman. (It so happens that the latter could not be a candidate, as he is to appear shortly in court, accused of financial naughtiness some years back. He’s still innocent). Likud is traditionally the Center-Right. Lieberman’s party is almost solely representing the interests of the million-plus Russian immigrants.

A year ago or so, I happened to be at the beach next to his table, where he, with cigar in hand, was conferring with his (jet-set) buddies. We are told that he has given up most of those friends – and cigars. His papa was the late and terrific Tommy Lapid, again journalist turned politician, who made up for his lack of good looks by having a biting tongue, not caring who was the victim of his lashing. He was a strong member of Likud, Netanyahu’s party. His mother Shulamit, still alive, is a successful writer. His wife, Lihi (sounds like pee-pee) is also a known journalist.

(In other words, he’s the Israeli equivalent of many, if not most Palestinians, who either want the Jews to be citizens of Palestine, or to ‘get lost’. Naftali is religious, which combines easily with being CEO of a start-up company that specialised in anti-fraud software, subsequently sold for $145 million. So, he has settlers, young religious activists and a lot of hi-tech yuppies on his side. A very clever man, a good speaker, and politically very dangerous.

Their battles concentrate on what I wrote in the pre-election Letter: no forced draft into the army (or work in the community), continued financial support for the religious schools (yeshivot), despite fact they only teach religion, no civil marriage, benefits for every child in the family – no limit to the number.

Final result? No idea, although we certainly have a new ‘pretty face’ on our scene, and it’s a man. Over time, he may gain the PM-ship, although he must first change that electoral system. In the meantime, the stalemate – and the pride of the individual politician not to give up his/her coalition position – will continue, and we may have another election within 12 months.

I’m off to play tennis…