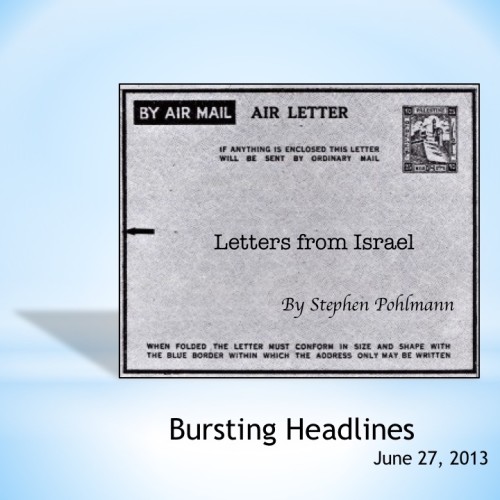 Every country has its problems – its own problems. Problems that really are not interesting to outsiders. (Many of you will have travelled to a country with its own language, and read the ‘English Daily’, published for the tourists. It is usually so BORING!).

Well, that may be the case with Israel. You may or may not be interested in the fact that security is not always our top priority. ‘Aren’t you scared when you walk the streets?’ is what I am often asked. ‘Oh, we get used to it’ is often my answer, or words to that effect. And that is true. We have had the ‘Palestinian problem’ since long before the establishment of the State of Israel.

(Actually, it’s the ‘problem with the local Arabs’, as they have referred to themselves as Palestinians only recently – during the British Mandate era, the Jews were the Palestinians).

Just take a look at some of the main subjects in the Jerusalem Post:

A 53% cap was originally suggested by the government, with some mentioning a figure as low as 40% , in order to boost foreign revenue (and perhaps the pockets of the many involved). So, the people (remember them) have won a major battle, and we expect fuel bills and many other related overheads to be reduced.

In Israel, the Palestinians can join the others at that door. This very new country is taking in enormous quantities of immigrants. The Russian ‘invasion’ alone upped the population by over 20% at the time. That would be over 10 million in the UK! We’ve had sudden influx of over 70,000 Ethiopians. The Moroccans still feel they have the wrong end of the stick. Ask the Arab Christian Israelis how they feel (see below). And so on.

In recent times, Israel has taken in many thousands of ‘political refugees’, from Sudan, Somalia and other northern African countries. In fact, our doors have been far more really open than most of their physical neighbours. But is has created a real immigrant problem, and south Tel Aviv has areas that are almost no-go. We need another such problem like a hole in the head.

Ben-Gurion, our first PM, was easily persuaded by the British to continue this newtradition, in order a) to keep peace between what was then feared to become a problem between religion and state, and b) by creating separate Ashkenazi and Sephardi Chief Rabbis, keep peace between the two main Jewish communities (the former consisting of the mainly central European Jews, and the latter, the descendants of the Spanish Jews, having settled primarily in northern Africa and the Arab world, but also from such unlikely areas as Greece, Holland, Bulgaria…).

Why ‘dark days’? Well, there’s so much division between the many Jewish sects, that few take much notice of the authority of the C. R.’s office. Unless, of course, it’s their ‘boy’ who’s in office. Then they of course will take full advantage. The question is often being asked today whether the C. R. is even necessary any more.

Ooof! These subjects become so monotonous. Yet the minute Rohani was elected last week, the word ‘moderate’ was flashed across the screens. Wake up!!

And finally, McDonald’s has refused to open a branch in the new mall in Ariel, the largest town (settlement) in Judaea and Samaria (the West Bank). So the settlers are calling for a boycott of McDonalds – and Burger Ranch are ‘moving in’. They’re our local burger chain; we used to have MacDavid, but it didn’t make it.