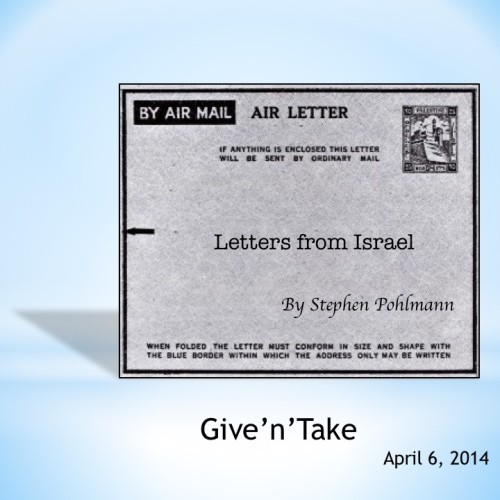 Remember the chauvinistic version of ‘give’n’take? I give and she takes…

I had another version recently – in a business deal.

A customer of mine is ‘ financially collapsing’. Sales are good in that country. Whoever picks up the pieces is going to have a nice windfall.  In negotiations with one prospective company, we were discussing discounts and margins. They kept on referring to how much they would lose if our prices to them were lowered. And I had to remind them that their use of the word ‘losing’ was not fair. They’re starting with nothing; anything above that is a plus. They cannot presume to inherit everything. They haven’t earned it.

Well, there are parallels to that in the (now collapsing) Israeli-Palestinian negotiations.

Everyone tries to chose ‘where/when’ to start the story.

How about the 1947 UN vote to establish Israel? Democracy is a word being bandied about daily. So that seems just.

This vote was certainly democratic. They way the expectant-Israelis crowded round the radios listening to the vote was proof of this.

What would have happened, had the vote gone the other way? How would the Jews have accepted that?

I don’t know how many Arabs were crowded round their radios, but we DO know their reaction to the vote. 67 years of unacceptance of that vote. 67 years of war or attrition – and so much of it in the name of democracy!

And the rest of  the World, including the daily-expanding numbers of countries in the UN turns a blind eye to that original vote, and puts pressure on the only proper democracy in the region.

You don’t agree? Well, get off your distant horses and come and check for yourself.

I’m currently in Eilat, attending a conference in the Dan Eilat Hotel, perhaps the best of the wonderful selection of hotels they have here.

I’m writing this bit, seated on the top floor terrace. I see Aqaba (Jordan) 500m. over there, I see Taba (Egypt) 3km down there, and just 12km in that direction, Saudi Arabia.

This is such a crowded and small part of the World.

I’ve just been chatting to a dentist from Efrat, one of the so-called settlements in the West Bank. I plan to visit him (report to follow).

During those few minutes, we found we agreed on much. Does that make me ‘a right-wing settler’.

We’ve become so naïve, so politically correct. We sometimes do not see what’s happening right in front of us.

In 1948, the Arab armies attacked the newly-formed state of Israel, refusing to accept the democratic division of land between Jews and Arabs.

By chance, they did not succeed in their endeavours. The post-war status quo left Jerusalem divided, with the whole of the Old City in Jordanian hands. The synagogues were destroyed; Jews were forbidden to visit the Temple Mount. In 1967, another war ensued, passing Jerusalem into Israeli hands. The army chief’s famous words that the Temple Mount was back in Jewish hands reverberated throughout the Jewish world. That was a very important moment. The Jews could again pray at their holiest site.

Then came another if Israel’s extremist actions: This extremely democratic country allowed freedom of religion in Jerusalem (in the whole country),  handing control of the Temple Mount to Jordan and the (Muslim) Wakf, the two very entities which had previously banned Jews from accessing the site. If that ain’t being politically correct, nothing is…Because now, the presence of Jews on the Temple Mount is severely restricted. And even when they ARE allowed in, Jews are, astonishingly, forbidden to move their lips, lest a prayer be uttered.

If it’s precedence the Muslims want, there is written proof that in the Middle Ages, Jews WERE allowed to pray on the Temple Mount. And now there actually is a movement of moderate-minded Jews and Muslims, discussing the possibility of a small corner of the area being set aside for Jewish prayer. I can’t see that happening, but it’s nice to dream.

Another give’n’take refers to the land for the refugees. Well, I’m fed up with the world presuming reference to Palestinians when using the word ‘refugees’. The oldest UN agency is the UNWRA, set up to look after them. It’s become a permanent fixture, like the Agatha Christie’s ‘The Mousetrap’, now in it’s 63rd year in London’s theatreland – almost same age…

Reminder: there were far more Jewish refugees fleeing the Arab countries at the same time. The fact that they were welcomed in their new countries (mostly Israel), given chances to settle and make a new life, with passport and education does not make them any less the victims.

Visualise 2 footballers going for the same ball. They clash, they both cry. One gets up sooner. Ref gives him yellow card – for appearing to be less-injured, and therefore guilty. It’s crap.

And changing the subject. Only a great democratic state would go through the process of investigating and eventually finding an ex-PM (Ehud Olmert) guilty of taking bribes (with other charges pending). Perhaps he’ll be in the same jail cell as the ex-President (Moshe Katsav), found guilty of sexual harassment.

The Israel-bashers will on the streets again, turning that same blind eye to  another sign of Israel’s decency.