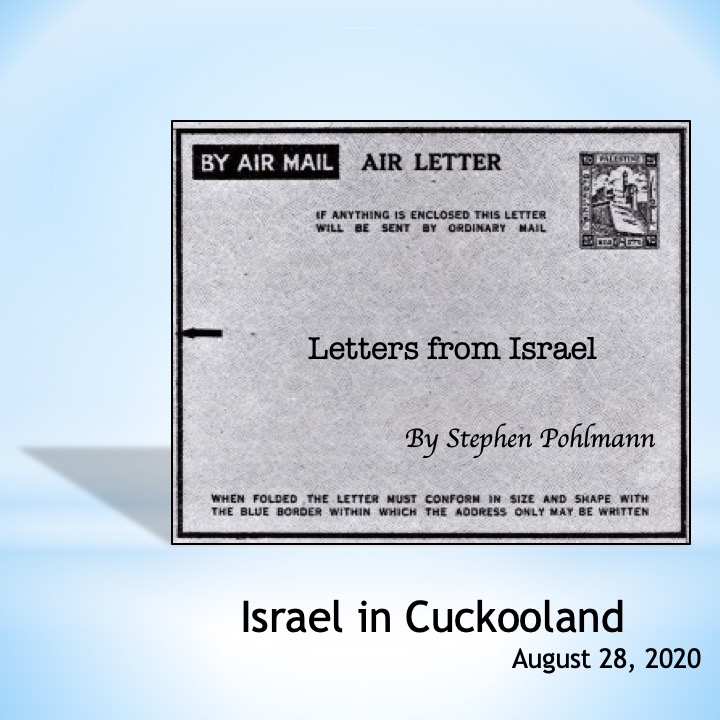 What a nice coincidence…A few days ago, I was very busy. I won’t go into all the tasks I was attending to, but suffice to say I was very occupied. So much so that I didn’t have time to hear the news, possibly didn’t even have time to hear what Aviva was saying, was busy watching the snooker, playing tennis and, of course, writing my Letter from Israel, which was entitled ‘August 13, 2020′.

That letter ended with the words “To summarise, apart from the cuckoo land existence in the Gulf States, Israel is the Middle Eastern paradise….”.

So now all are waiting with bated breath for Stephen’s thoughts on the subject. Or are we? Fact is that everyone – at least here in Israel – has a comment, an opinion, and I can assure you, they are ‘all over the place’.

Where does one start? No matter how knowledgeable I may be on the subject, it is inevitable that I shall slip, slide and omit here and there.

’79 was when we signed with Egypt. I remember almost arguing with my mother-in-law on the subject. They can’t be trusted, she insisted. Who said anything about trust, I replied. We’re not going to suddenly, after the signing, turn round and go home, leaving the border unattended. Something has to be signed; you gotta start somewhere. It’s the first of so many steps.

I was in Egypt a few times, both before and after the signing. Little has changed. Egyptian policy, plus the attitude of the man-in-the-street is still extremely anti-Israel. After over 30 years, you can say we’ve passed the 2nd step.  But in this region, peace between friends is difficult enough. Between enemies? Takes generations.

Sadat had an ulterior motive. Russian support was at a low; he had to be nice to USA. That meant peace with his arch-enemy (he was an admirer of Hitler; read his autobiography). He was a clever man. He knew where his priorities lay. For that, he flew to Jerusalem and faced the fan.

Jordan’s treaty in 1994 was slightly different. Jordan’s never been a powerful country. Weak borders, weak economy, no Med. sea in which to bathe. A reminder that Israel’s longest border is with Jordan, and that Israel is powerful. Jordan has NEEDED a good relationship with us. But with over 65% of his population still claiming to be Palestinians, his family (tribe) remains in a precarious position. Don’t be fooled by Abdullah and his father Hussein’s English education… Jordan’s a fence-walker. Pretends to be neutral.

But when anti-Israel propaganda is required, Jordan’s (dictatorial) monarchy is at the forefront. And when the Palestinians are threatening to overthrow his country (Black September, 1970), his army will rise up and devastate them.

Peace with Jordan was good for both sides. The co-operation along that long border is excellent. Jordan would not openly admit it, but peace with Israel is even important strategically.

And now I approach the UAE subject, for some of Israel’s enemies are also Jordan’s enemies. But, simpler said, the agreements with Egypt and Jordan could be said to have been peace treaties. (Almost the whole Arab world was against Israel, but not all of the countries joined in the fighting…).

The Gulf States – and others – have much to gain from a treaty with Israel. And of course, vice versa. Israel’s know-how in so many fields, including strategic and intelligence vis-à-vis the threat from Iran can be of enormous benefit to the neighbours.

I have often stated that if/when we solve the problem with the Palestinians, it will only show that that is not the main problem. The Middle East is a mess. Many Arabs may ‘dislike’ Israel and the Jews. But their distrust for their tribal neighbours is just as bad. The dis-unity in the Arab world is one of the main reasons Israel remains undefeated.

The Sunni-Shiite split has been worsening. It is now identified by Iran and its allies and satellites against the rest.

I really do believe that the apparent success of Israel as a state, overcoming all the terrible obstacles both external and internal, is an indication that other systems are not working. A reminder that the Palestinians are not the only sufferers own this region. The poor peoples of Syria, Yemen, Iraq, Lebanon etc. etc. are persistently being downtrodden by their leaders, without any ridiculously pathetic support from the UN, as received by the Palestinians.

UAE and Israel will gain from this treaty on so many levels. Undoubtedly, other countries will follow, starting with Bahrain, Oman and perhaps, incredibly, Qatar. Rumours are rife covering others. The Palestinians are sliding further into their misery; the ‘friends’ are abandoning them.

And in Israel, a country currently suffering major internal conflicts, accusations are rife about potential military contracts  for the UAE, a country which already has ‘1.2 fighter jets per capita’.

This is undoubtedly a coup for Netanyahu, and does deflect a little from the political mess he is in – Covid-19 spikes, unsigned budget which could cause govt. to collapse any day and force 4th elections in 2 years, and those indictments floating above Netanyahu’s head.

Summary..of this and the other 7 million comments: a peace agreement signed is better than none. Let us pray that the balloons currently coming across the Gaza border carrying firebombs will one day carry no more than hot air.