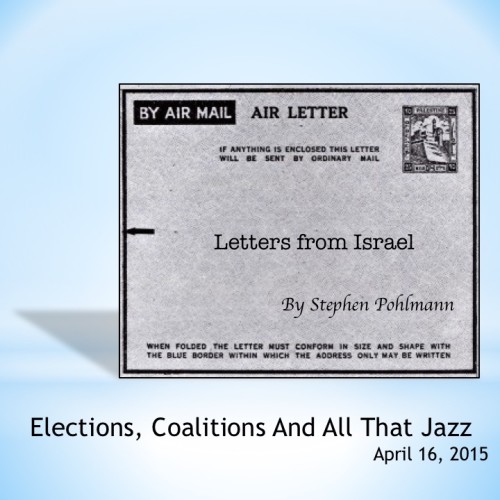 Elections, coalitions, and all that jazz

Believe it or not, I’m a very busy guy. Like most of you, don’t know how to fit it all in the never-expanding ever-limited 24-hour day that we’re given.

Where’s that 1/2-hour pill that replaces ‘all we need during sleep’…?

You think WE have problems with elections in Israel. Just a reminder that the other 2 countries ‘to which I feel somewhat attached’ are also in ‘strange land’.

USA has entered that infamous ‘lame duck period’ in advance of elections, the dates of which are always known 5 years too early…

And the UK….well, bang goes the theory in Israel that ‘we should have an electoral system like they do there’. They were concerned that some constituencies in Israel would be ‘foregone conclusions’ if they left it to ‘first past the post’.

Well, guess where the 56 Scottish National winners are located….

And can you understand why poor Nigel Farage resigned as leader of the (right-wing) UKIP party? They got almost 4 million votes – around 12.6% of the total vote. Not bad, you might think. Not only did he not even win his own seat, his party got just 1 seat out of the 630 up for grabs in Parliament.

And I’ve a feeling David Cameron would prefer to have a wimp of a party like the Liberal-Democrats as coalition partners, rather than the slim overall majority he now has, faced with the prospect of some very bitter fights from within his own Tory party.

After some very disgusting wheeling and dealing, back-stabbing being the norm, Netanyahu has come out absolutely triumphant. Well…almost. In fact, his coalition holds a 61-59 majority. At least his 4 partners actually have quite similar thoughts on most important subjects. His real enemies, politically and personally, are in what is known as ‘the Opposition’.

Don’t think that description means anything. Infighting is the norm for the Israeli opposition. We’re in for a messy time.

Remember my suggestion about the winner begin automatically given 15 extra seats, in order to have more chance of carrying through the promises made in their manifesto? Well, now the Italian parliament has voted in favor of PM Matteo Renzi’s bill, based on the same principle. They’ve had enough of weak government.

Details: the largest party to secure 40% of the vote will automatically be assigned enough seats to have an automatic parliamentary majority. If no party wins 40%, then they have a 2nd round of voting between only the 2 largest parties, with the winner guaranteed 54% of the seats.

More drastic that my suggestion perhaps, but who cares. Part of Democracy is the ability to chuck out a government which fails (or even appears to fail – the people still have the power).

(Palestinians: As Abbas enters the 11th year of his 4-year term, should you come clean about Democracy?)

But I can report one or two nice ‘facts’. (Please don’t ask if they’re based on absolute truth. History has a way of smoothing over such matters) –

And for those of you who are not familiar with German, ‘Herzl’ means ‘Little Heart’ – in the affectionate sense.