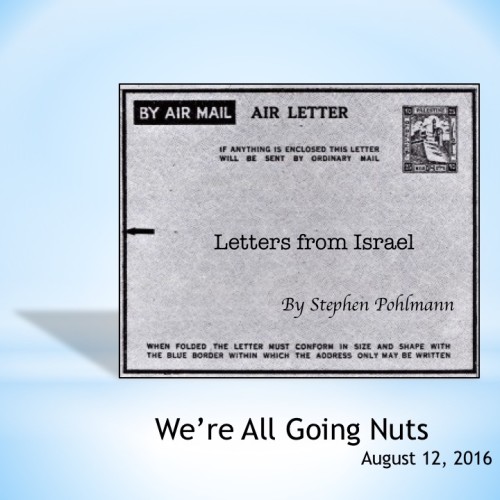 Perhaps 2 months since my last letter.

I have not been swamped by desperate fans, hungry for more.

You might call it apathy. I’d call it ‘We’re All Going Nuts’.

Specifically, the fact that Israel is still considered one of the main causes of danger and disaster proves  – at least to me – that we’re all going nuts.

The fact that, despite daily reminders of Islam’s refusal to conform to the society around it – that it is prepared to destroy what it’s neighbors consider a decent way of life – the Palestinians are still considered the poor underdogs is mind-boggling.

Erdogan spits in the face of democracy, holds hands with Putin, and the World just smiles.

UK’s Jeremy Corbin and US’s Donald Trump also appear to be redefining democracy, knowing that ‘’hoi polloi’(the people) have no idea what they want, nor how to get it’. *

Let me give you a specific:

I am on an 11-hour United Airlines flight from Tel Aviv to Newark. It is 5 hours into the flight, and I am freezing – as are most of the other passengers. All blankets are in use; all sweaters, jumpers and jackets have been extracted from the hand luggage.

It took them 1 1/2 hours to find a blanket for me. Me, who has rarely even needed a blanket in 50 years of flying.

5 hours, and my hands are still almost frozen. The steward, who claims to be ‘the one in charge’, says there’s nothing wrong with the system – the thermometer shows 75F. He’s actually arguing with me…I reply that if it’s 75C, would he please increase it to 85F, so that we don’t freeze – pointing out just about every shivering person around me. He says no, he won’t put it up to 85F, but he will increase it. I thank him. Over 3 hours later, whatever the temp. is, we’re still freezing.

If that’s the service we have come to expect, then forget about solving the Middle East problem.

And when Israel launches a pre-emptive attack on either/both Hamas and Hezbollah because of the thousands of missiles aimed at our kitchens, don’t blame me.

But I told you so.

* Donald – Just in case you are reading this…You may recall that, early in the campaigns for Republican presidential nomination and the UK premiership, I suggested that if/when you and Boris win, you’d both come to your senses, pretend the whole thing was a joke, and…go home. You’d have proven your point/s that the electorate is cuckoo.

Boris came through, although not quite as I had predicted. You? You’re leaving it a little late, but why should you care? True to your character, Donald, why not take (a giant) step back and return to that part of the World that pays you (sometimes) for being you…