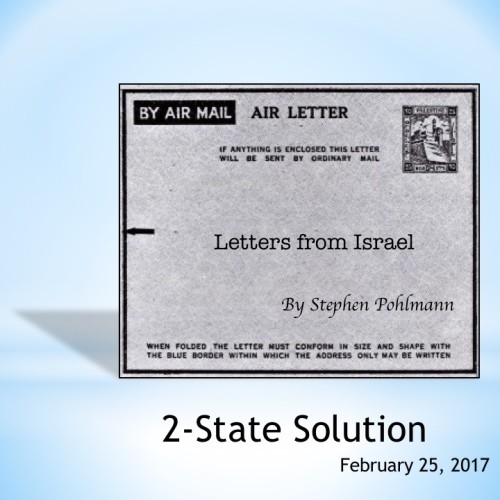 Enough with all this Mr T-stuff that we’re being fed daily, and the ‘interesting events’ happening daily around him.

Also in the last few days, Mahmoud Abbas, the Palestinian president, said that despite what was being said in Washington, the 2-state solution is still on the table and acceptable to the Palestinians. (Not sure the Palestinians agree). He reiterates his insistence that Israel should go back to the June (pre 6-day war) 1967 borders.

Gosh, is he a dummy or what?

For those of you who do not remember where you were or what happened around June 1967, let me refresh your memories. (And maybe a confidant of Mr. Abbas will whisper the same in his ear).

In June 1967, the status was still that which followed the ’48 War of Independence: A line had been drawn where the ‘armies’ were separated; the Jews had fled Jerusalem; Jordan was occupying the West Bank and Jerusalem; Egypt was occupying Gaza.

Strategically, not a good situation, but that was also the case in 1948. It has always been more a case of accepting and living with a difficult situation, rather than finding a strategically-good one).

And while we’re about it, let’s remind ourselves why there was a war in 1948…In 1947, the UN voted for the 2-state solution. Again a reminder that the lines were drawn in a way that would only be OK if both sides accepted. The Jews accepted it (only 3 years after the WWII, how could they not). The Arabs did not. Even then, they showed that democracy (the UN vote) was only something they defend/promote/respect when it is in their favour.

I think even the Arabs will agree that, for whatever reason, THEY started the 1967 war. (Yes, Israel attacked first – hence the incredible success by initially destroying the Arab air forces while most/all were still grounded – but the Arab armies’ build-up made it quite clear to everyone that war was imminent).

So now, Abbas says he would so much like to go back to a situation which THEN was so unacceptable to the Arabs, that they started a war. We are all missing something here. Otherwise, we would respond to the Palestinian dreams with the ridicule they deserve.

You started an unjust and ridiculous war, you lost terribly, and now you want to go back to square one and pretend nothing happened? Life does not work that way.

It was difficult to remove the over 2,000 Israeli ‘settlers’ from Sinai when we pulled out. What do we have now. A fragile peace, with Egypt having lost control of Sinai, now being infested by ISIS.

It was more difficult to remove the 8,500 ‘settlers’ from Gaza, and the result is there for everyone to glare at. Not a success (and don’t tell me that Gaza’s situation today is caused by Israel’s decision to leave Gaza – it’s caused by the area’s development since – and also Israel’s reaction to the development).

So now Abbas wants us to remove over 1/2 million ‘setters’ from the West Bank. THOSE are among his preconditions??

Just a reminder of the Balfour Declaration that Jordan should be Palestine: the best option, and still a theoretical possibility. (All it needs is for King Abdullah of Jordan to become ‘even wiser’.).

No way will Israel annex the whole West Bank and take (unfair) control of the large Arab population. We don’t want that – and it would be ‘Apartheid-like’. For we could not give them equal rights, automatically opening the door to loss of control of the only state where Jews can call home. They have over 50 such states; we have only this one. So that is also not an option.

Gaza has gone; that’s part of the 2-state solution. Hopefully, it will eventually develop, like the parts of the West Bank which will become the other part of Palestine.

Unfortunately,  these are 2 peoples, most of whom cannot imagine living together. There has to be separation. Like India/Pakistan in 1947.

The 2-state solution, properly defined, is the only option.