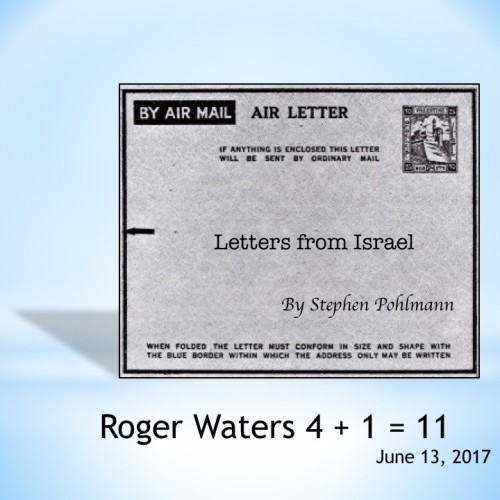 Roger Waters’ anti-Israel campaign is extreme rubbish. And his continued attempts to stop entertainers appearing is Israel is pathetic. Radiohead’s Thom Yorke, ahead of their next month’s show here in Israel, recently said: “It’s really upsetting that artists I respect think we are not capable of making a moral decision ourselves after all these years”.

We saw Queen (with Adam Lambert) here. We shall see Rod Stewart tomorrow. Among other artists, young and old, due here soon are Brtiney Spears, Tom Jones, Engelbert Humperdink, Cold Train, The Four Seasons, Tears for Fears and Cliff Richard.

Summary: Israel’s OK as a pop concert venue, but we shall never have the pleasure of seeing Pink Floyd.

Waters is presumably a friend of Hamas (Jeremy Corbyn sensibly did not mention Hamas in his election manifesto). Hamas is in control of Gaza – Hamas’s largest financial supporter is Qatar – Qatar is hosting the 2022 FIFA (‘Funds into Friends’ Arms’) World Cup – Qatar was sponsor of Barca and still sponsors SKY’s Weather reports

Qatar is one of US’s largest recipient of military aid, with it’s largest Middle East based located there – Qatar is being abandoned by its Arab neighbours – Qatar has already reduced its funding of Hamas – Iran will take over – Gaza infrastructure collapsing

Gaza is now down to 3 hours’ electricity a day – this effects everything, including water supply and filtering – a medical crisis looms, which could, of course, across the borders into Israel

Hamas blames Israel of course and is threatening military attacks. Inevitably, the UN will pass a resolution condemning Israel’s inhuman treatment of the Palestinians – 4+1 = 11.

Within minutes, I have a PS –

Just spoke with one of my daughters, who herself attended a Roger Waters concert, HERE IN ISRAEL, around 10 years ago. OK, one may change one’s mind. But, at that concert, attended by thousands of mixed Israelis (reminder: over 2 million Arab Israelis here, most of whom are free-living Muslims), Waters primarily spoke of peace – which is great. It’s what most Israelis want. He did not / could not speak against coming to Israel, for rather obvious reasons.

So his current state is hypocritical, to say the least.