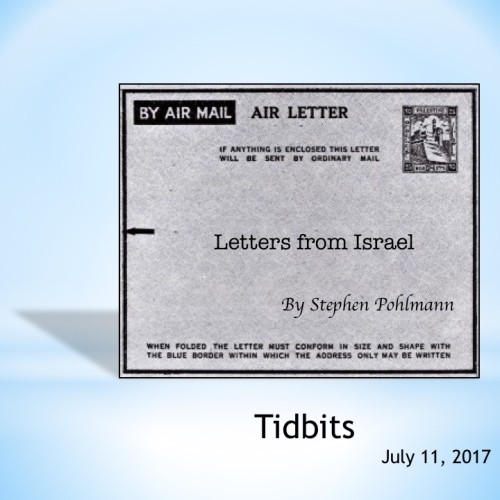 Terror Prevention – During few days’ visit to Berlin with Aviva, I ended up in usual ‘man’s position’: hanging around outside a fashion-wear store. Sometimes I have to be inside, within earshot; sometimes I’m allowed to be outside, so I can stare. This time, an Arab-speaking couple were having a ‘difference of opinion’.

She had the head cover, but not hijab etc. He looked like any yob. (I saw him later, meeting a couple of his buddies. My profiling was not complimentary. They way he greeted his friends with their secret ‘fives’ ’shake’ and ‘hug’. The way the 3 of them lit up their cigarettes and stood in such a way that ladies with prams were forced to go round them). She may have said something to annoy him – or defy him – but his shouting at her was frightening. He physically cornered her, screaming. And she just took it. This was tyranny.

Under today’s circumstances, some people would agree that he should be arrested, locked up, keys thrown away, and a future terror attack would be prevented. Just difficult to prove – and where would we put them all?

Three Big Brothers – Last week, CNN’s Richard Quest was referring to the daily expansion of Amazon (they just bought Whole Foods for $13.7 billion), Facebook and Google. He called the subject ‘fascinating’. Yuval Harari (reminder of his 2 books: ’Sapiens’ and ‘Homo Deus’) and millions of other souls call it ‘frightening’. By coincidence, having wondered if Microsoft should be on that small list, I was not surprised to read that they have let over 7,000 staff go, mostly in sales depts.

UNESCO joins the fashionable Left – First UNESCO officially announces Islam’s priority ties to Jerusalem, then to the Temple Mount, and now to Hebron. Biblically – or should I say historically – the Jews’ ties to Hebron go back to even before Jerusalem. UNESCO, having done so much good, is now becoming a political joke.

So who or what is the fashionable Left? I met a very nice guy recently in London. Friend of a friend. Call him Joey. For some reason, Joey was really keen to corner me over a drink and discuss primarily the Israel/ Palestine subject. I tried my standard approach: Go back to 1948 – democratic vote at UN (Resolution 181) splitting land into 2 with Jerusalem under int’l control. Like it or not, it WAS a democratic vote. I mean, the Arabs also participated. Had they won the vote, do you really think armies would have attacked Palestine? Both have rights to the land; so split it.

He listened, he nodded his head (whiskey?) and then simply declared: “I don’t agree; Israel took the Palestinian lands”. I bent so far backwards for him, but nothing would budge his mindset. He’d been to Israel in the 80s. But for him, that meant –

The Arabs he met in Ramallah and Gaza were ‘peaceful’ and spoke only of their    efforts at peace and Israel’s refusal to talk. He says he met Rantisi, one of the 2 founders of Hamas, and found him to be ‘educated’ and a ‘positive man’. (Only need Wikipedia to remind us of the vitriolic words for which Rantisi was famous)

I gave up. But he didn’t. He passed on a book for me: ‘My Promised Land’ by Ari Shavit, a ‘left-leaning’ journalist. The book, which I have not finished, is beautifully written. It really does show a love for the land, and the story of his very well-educated and well-connected family’s ties with Israel’s recent history.

But Ari is like Joey, and they are like UNESCO. They can’t imagine a world without blaming Jews or Israel for just about everything. Ari writes about members of his family who were among the first Europeans to view this land during the early Zionist days, traveling elegantly on the old railway through God-forsaken landscape. He writes that they saw only the Jewish historical sites in their eyes and minds, and not the existing Arab villages, towns and settlements.

His repeated conclusion is that ‘we took their land’. He repeatedly refers to both sides’ ties to the land, yet then decides to ignore the Jewish side in his conclusions.

I’m sorry, Joey, but I shall not be able to finish this fine book. I have more enjoyable books to read.

Gaza Island – There are some intellectuals and developers in Israel who really do plan a man-made island off Gaza’s coast, for them to have a land- and sea-port etc. etc. $5 billion cost has been quoted.

I’ll agree to it ONLY after Suha (Arafat) donates at least $1 billion of her wealth.

A year after my first such ‘experience’, last week I was back in the Negev desert. Again next to the Mitzpe Ramon crater, we waited till the moon set, till real darkness fell. We sang, we ate, we drank, we  ‘meditated’ (that’s ‘gave time for thinking and contemplation’) and we took photos. 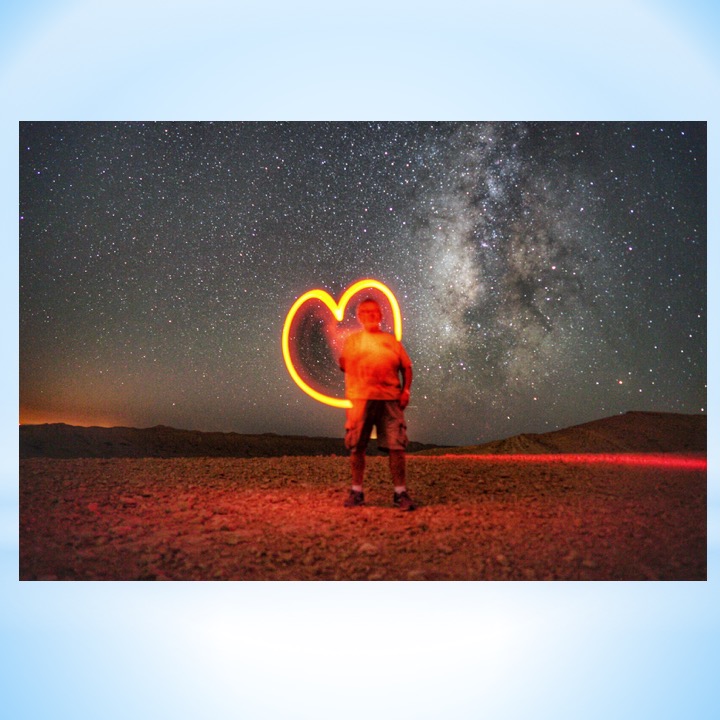 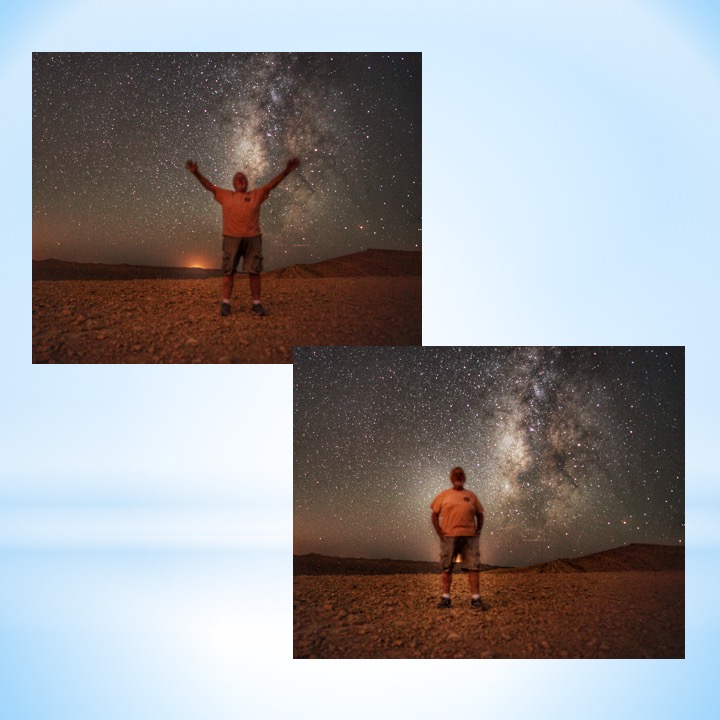 The next time anyone says ‘you would say that, wouldn’t you’, I’ll point out that I’ve seen the heavens, I’ve experienced the feeling of smallness, the stupidity of conflict and the waste of our precious time here.

I know how to be objective.