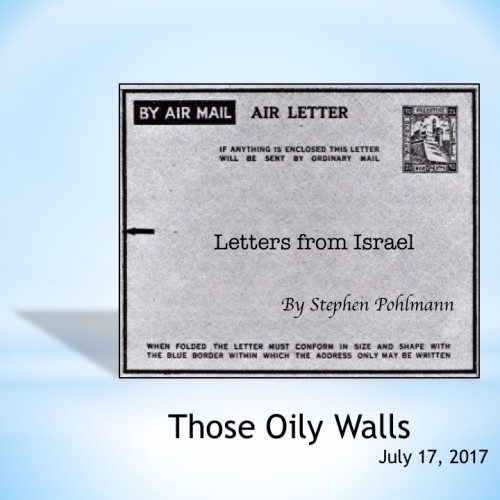 Let’s get this straight. In Israel the definition (my definition) of a Leftist is one who thinks everyones the same – ‘we are all human beings’ – and therefore….

So when I defend my non-Leftist stance, that’s my main defence. We are all different, we are distrustful, we are over-protective – but even that has it’s limits.

To cut a long story short, he has helped push forward the Red Sea canal project. A canal is to be built from the Red to the Dead Sea, a distance of 200 km and a drop of about 400m. It’s an agreement between Israel and the Palestinian Authority. It will be funded by various governments and entities. It will primarily benefit the Palestinians, but also the Israelis and the Jordanians. Irrigation, desalination, drinking water and the Dead Sea industries – all incredibly important benefits.

Already Israel appeared to have become self-dependent as far as water is concerned. Now it’s the chance for the Palestinians. (It is a common fact that water-mismanagement in Gaza has accelerated their problem, but I’m trying to keep politics and stupid our of this).

The whole project will take at least 5 years to flower – and I am sure there will be tough and damaging obstacles on the way. But the Leftist side of me is overjoyed at the prospect of satisfied people and subsequent peace.

But that step up is threatened by more steps down (those oily walls). 3 Israeli Arabs (I repeat, Israeli nationals) carried out a terror attack on the Temple Mount, site of the Al Aqsa mosque etc. They killed 2 Israeli border police, both of whom happened to be Druse, not Jews. They ran into the Moslem holy areas, but were followed by the Israeli police and killed there.

This is a dangerous time. Israel’s subsequent closure of the area – for a while, they closed the whole Old City to Arabs – was understandable, but predictably provocative. It was Friday, the day of prayers for the Moslems. There were a few condemnations of the attack from the Arab World, but also there were condemnations of Israel’s reaction.

(Jordan’s King Abdullah, no matter how close he thinks he is to the subject, really should stay out of it. For this necessarily-neutral man to criticise Israel Is pathetic. In my opinion, his country could have helped solve the Israel-Palestinian problem years back. Now, of course, he has his new refugee crisis, and his country is on the edge of collapsing).

We are threatened by a 3rd Intifada.

Oh, and just a reminder. Iran is watching all this with rubbing hands. Having been ‘knighted’ by Pres. Obama and the UN for being such honourable neighbours, they have the Hezbollah card up their sleeve. The latter is now fully armed and raring to get at Israel again. Please don’t think that ‘no war’ on the Lebanon front has anything to do with peace.