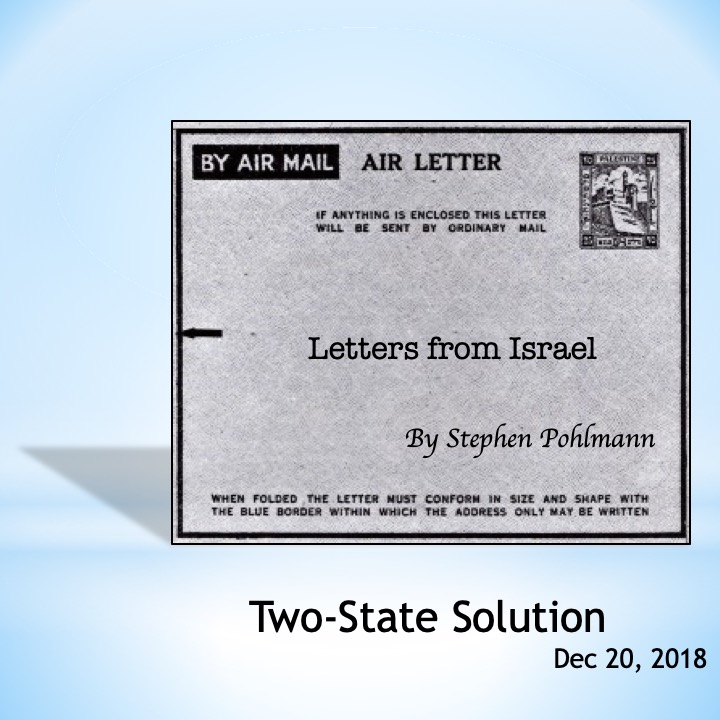 Gershon Baskin writes in today’s Jerusalem Post on the subject of the two-state solution.

Gershon is described as a ‘political and social entrepreneur who has dedicated his life to the State of Israel and to peace between Israel and its neighbours’.

I don’t think I’m being unfair by describing him as a peace activist, with views to the Far Left. I also don’t think I’m unfair in smilingly commenting that he is used by the Jerusalem Post as their ‘in-house’ Lefty, just as Ha-Aretz (Israel) The Guardian (UK) or the New York Times (USA), each great newspapers, but also each clearly leaning to the Left, will often include views from the Right, ‘just to show how balanced we are’.

As usual, he almost blindly criticises Israel for all the reasons why we have not reached the Two-State Solution, why the Oslo accords failed etc.

(‘Two-state solution’ is one of those words/phrases that has totally lost its original meaning).

Baskin accepts the the current ‘democratic’ Israel as a state, with it’s surprising mix of peoples. (‘Democracy’ is another word/phrase that now has umpteen definitions). Yet he is so against the ‘settlements’ in the ‘West Bank’, never suggesting that they, at least theoretically, could be part of a democratically-mixed population of a future Palestine. (OK, I’m dreaming, but this is for the sake of argument).

And on the opposite page of the same edition of the J-Post, Dexter van Zile, ‘a Christian media analyst, exposes the plight of the 1,300 Christians left in the Gaza Strip.

Does Gershon really equate our democratic version of a state with what he wants in the West Bank, and what van Zile sees is happening in Gaza?

You only need the fingers on your to hands to count how many Jews there are in tolerant and moderate Jordan, Saudi Arabia etc. Not sure how content the remaining Jews are in Iran, Morocco, Tunisia… The Christian Copts in Egypt are so numerous, that they would appear to have a chance of survival. (Can’t count them, though – the current estimates are between 5 and 18 million!).

Without neighbouring countries as relatively tolerant as we, what hope is there?