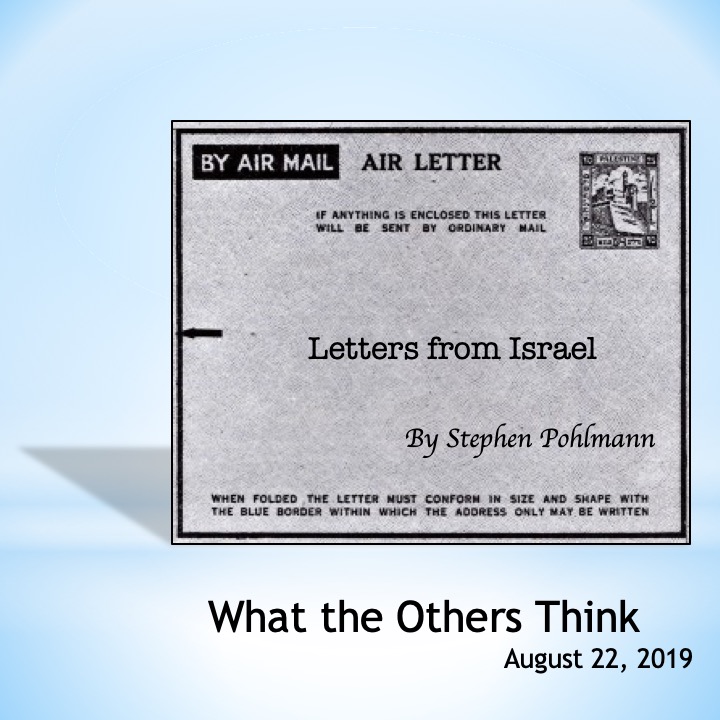 What the Others Think

You’re always reading MY letters – around 350 of them already. What a single-opinioned avalanche!

Following the hullabaloo about Tlaib and Omar and the subsequent reports, analyses and opinions of professionals, here’s a narrow-ranged selection of opinions from those writing to the Jerusalem Post.

But first, have you noticed over the last few months, years, decades, centuries, the effect of migration? The character of London, my home town, always gave me a fairly interesting view. E.g.

So the lovely Omar joins her fellow Somalians in Minnesota and appears to be working hard to help them improve their lives. The danger is her focus. It takes time to integrate – in any society. Considering most Americans are immigrants (and I pointedly am leaving the sad, sad, story of the Native Americans aside…), it would appear that the country has handled the subject fairly well. But there are always negatives, and they are so easily exploited. In walk Omar and Tlaib etc. At least Tlaib is originally Palestinian, so her focus on this region is understandable. Omar is Somalian. I have seen some of her speeches; hardly a mention of her homeland.

So to the letters to the Post – some in concise format –

When friends come to call, I invite them in for a tea and a chat. But hostile strangers at my front door who want to go into my back garden and help my abusive neighbours throw stones at my windows – no entry.

Tlaib claims her grandmother and others like her live in ‘inhumane conditions’. But, she actually lives in a very comfortable home in a town under complete Palestinian Authority (PA) jurisdiction – no evidence of ‘occupation’. Townspeople boast of high education percentage, many holding important positions in PA ministries and other institutions in Ramallah, including banks.

Tlaib, accept the invitation, see your grandmother,  and see the truth.

Beit Ru al-Fauqa, where Tlaib’s grandmother lives, is right next to Beit Horon, where I lived for over 40 years. When we moved there, the village was very small. At the time, they had no running water. When they requested water, we happily provided it – at the same price we paid. We later learned that the water was being sold to others in the village at exorbitant prices. It was we who pressured the government to supply direct water.

Of all the countries in the World, the last country I would expect to deny Americans to visit is Israel. As an American Jew whose heart and soul reside in Israel. I am ashamed and appalled that Netanyahu has morphed into Donald Trump, whom I despise for the harm he had caused the good name of the U.S. AIPAC wanted these 2 Muslim anti-Israel members of Congress to see first-hand this free, open and democratic state compared to what they have been taught their entire lives! To deny them to visit is contrary to Israel’s mission on tikun olam (promoting Israel democracy). (Me: Unfortunately, these 2 ladies had no intention of visiting any part of ‘democratic Israel’).

I am a 65-year old gentile from USA. Many years ago, I lived in Israel, learned Hebrew at a kibbutz ulpan, and lived through the Yom Kippur War in 1973 there, working in support of Israel….The recent decision by your leaders to not allow 2 congresswomen into Israel because of their beliefs – and at the behest of Pres. Trump – is shameful, and a stark disregard of democratic values in a free society. (Me: Every country has similar laws of refusal of entry). This has made Israel appear as the ‘errand boy’ or lackey of a racist US president. Is Israel afraid of allowing other opinions to be expressed?

This stupid act will have long-lasting implications down the road in regard to non-Jewish perceptions of Israel and will erode support by many Americans like me, for the cause of Israel. You may like Donald Trump, but remember that our electoral system put a man in that office who did not have the majority of votes and a majority of Americans do not approve of him and his immoral behaviour. (Me: At least the voters will decide, one way or the other; unlike in Palestine).

Enough of the hypocrisy of American Jews. Would they have wanted Goebbels or Himmler come the States to spread their poison in 1936?

I can now understand why the German Jews (the enlightened liberal ones) didn’t believe Hitler would last. To them, it was a marginal phenomenon. Well, I have news for you. Those who do not learn from history, are doomed to repeat it.

These women have an agenda. They don’t give a hoot for their constituents. Look at who funded their campaigns. They are not innocent. They could have come to Israel with the other members of Congress who visited, (Me: That was one of my points), but no, they have a different agenda – not too learn, but to destroy.

Among their other lies and distortions of the truth, Tlaib and Omar accuse Israel of being Apartheid, but Nelson Mandela, who in 1997 accepted an honorary doctorate from Ben-Gurion University would debunk that. Mandela, who knew more about Apartheid than any of the social media users alive, would not have accepted a degree from an Israeli university and praised that university as “in the best tradition of the Jewish people” if he considered Israel an apartheid state.

He reminds us that the US denied visa to Kurt Waldheim, despite his positions as President of Austria and former Secretary-General of the UN…..Congressman Eliot Engel said that these two congresswomen should have been permitted to visit Israel because “I believe they would have come away with valuable new perspectives. Elliot apparently lives on a different planet form the rest of us.

It is the primary duty oath your government to protect us from our enemies, such as these two congresswomen. Denying them the opportunity to enter Israel and spew their venom day after day, and be repeatedly quoted in the International press, was clearly the right thing to do. However, the matter should have been handled with more finesse.

P.F. writes (Aug. 20) that Tlaib and Omar “have been played with controversy” since being elected to Congress last year. He is very mistaken…they have generating controversy. They revel in it.

Their generation of controversy has been magnificent in obtaining frequent media coverage, which is really their aim, and Speaker of the House, Nancy Pelosi, has been allowing them to get away with attracting all that coverage for themselves, to the extent of often overshadowing the Democratic Part programme and objectives.

My opinion is that Israel should have allowed them entry. It would have been best to respect their positions as members of Congress. Let them have their photo ops with Palestinians, Israel peaceniks and the like, hold press conferences and all the rest. They would not have caused Israel any greater problems here than they have been causing in the US, and, after a few days, it would all have blown over in favour of newer news. Netanyahu should have told Trump “Thanks for your suggestion, but we can handle this”. Israel is strong enough to be able to deal with these two ladies.

And finally….following my frustration with the lefty Gershon Baskin, one more letter –

Recent letters to the editors (Me: like mine…) indicate that there may be a significant number of readers who would like the Jerusalem Post to cease publishing the articles by Gershon Baskin and Douglas Bloomfield.

I heartily disagree. Considering the fact that most headlines are quite serious, the columns by these 2 observers serve as the modern version of the comic strips the appeared in many newspapers of yesteryear. They are cleverly conceived, generally amusing, and totally alienated from reality.