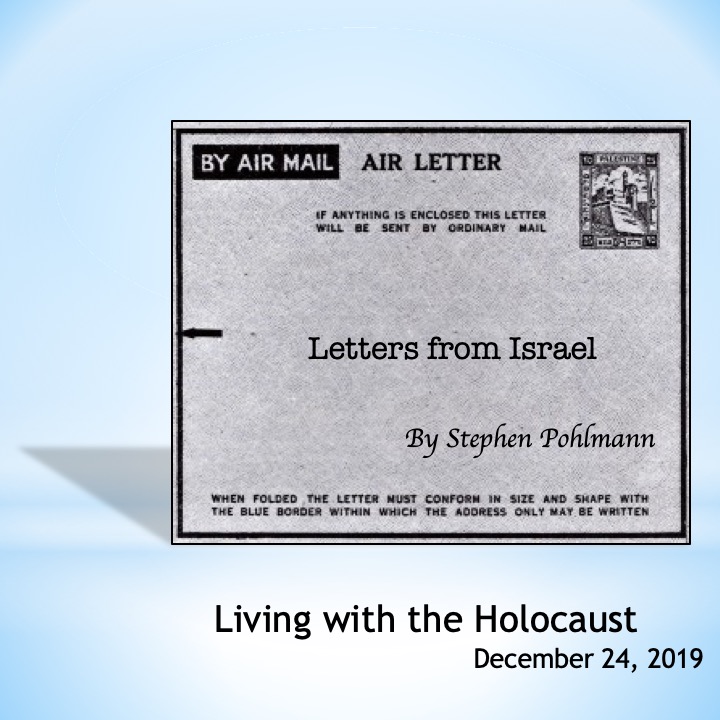 Living with the Holocaust

In September 2002, I was driving in Northern Germany and saw a sign for Bergen-Belsen. I am sure it was a Sunday; perfect for leaving the motorway and heading for a soul-searching experience. Suffice to say it was a humbling experience. I didn’t need someone next to me to appreciate what I was seeing. I sat alone on some structure and wrote the following:

I sit, listen and think.

So many at rest

Of those not found.

For all those listening.

This is a subject that will not nor cannot go away. Let me give you a few of my life’s encounters with the subject….

Many know my oft-repeated reference to my past: Father from an Austrian Jewish family. Traditional but secular.

Mother the same (in Czech Bohemia), but they converted to Christianity around the turn of the century (20th). They changed their family name from ‘Bloch’ to Block. So my mother was brought up Catholic – and so were we.

But many years later I visited the famous Jewish sector of Prague. You may know that one of the synagogues has the names of all Holocaust victims written on the walls. Many ‘Blochs’, including family of my grandfather. And just 2 Blocks; my grandparents. There was no escape for the converted.

I was travelling in Germany with a sales-lady from another company. 3-4 days, so it included evenings and mornings. She happened to be a blonde blue-eyed German lady. Forty-ish.

Over dinner one evening, we hit the subject of the Holocaust. I told her that in my early days of travelling in Germany, the late 60s, I came across several customers who were of the age that said ’they were involved’.  They saw me as English; the fact that I was also Jewish did not come up.

They would speak to me as if in the confessional. ‘I didn’t serve, I didn’t know, I wasn’t there’ etc.

The lady added that she was fed up with the subject. She wanted the World to move on; she wasn’t even alive when it all happened. I derided her – as gently as I could. Of course she was not the guilty one. But, at the time, it was only 40-50 years since the War. Many were still alive who were victims of, perpetrators of or witnesses to what is considered the worst-ever premeditated crime against humanity. And the Jews were still being blamed for what happened 2,000 years ago….

Instead of complaining, I told her to face reality and live with it. Face it, accept it. If to move on, then help by understanding it and hopefully preventing repetition.

The next morning, she told me that I’d caused her to lose sleep. But yes, she would look at the issue in a totally different way: with pride at what today’s Germany was trying to do, rather than focus on defending the indefensible.

I have already written about survivors who have ended their silence at the insistence of friends and family, mainly because of the continued existence of Holocaust deniers and rising Anti-semitism. One wonderful friend of ours focuses on talks to non-Jewish groups, schools etc., rather than preach to the converted. He also had the important but very difficult honour of accompanying Prince William and Kate back to the camp.

I am half way through ’The Art of Inventing Hope’ by Howard Reich. This Chicago Tribune journalist discovered that his father was interned in Buchenwald together with Elie Wiesel. He then spent 4 years (until Wiesel died) talking to and getting to know the great man, and this book focuses on those conversations. The main subject was the survivors and their families; how to move on from a horror that few, if any, could imagine.

That brings me to the 1981 movie ‘Skokie’, perhaps the only time Danny Kaye played a serious part. This was about a local Nazi ‘gang’ who decided to march in this suburb of Chicago, known to have not only a large Jewish community, but many Holocaust survivors. To avoid inevitable violence, the authorities decided to prevent the Nazis demonstrating. The Nazis then fought a year-long legal battle for the First Amendment, freedom of speech, defended not only by the ACLU (Civil Liberties), but by a Jewish lawyer.

He hated what he was doing, but persisted in stating the importance of defending the right to free speech. The ACLU lost a lot of its Jewish support and sponsorship. (Totally banning any Nazi party, like in Germany, would have solved this problem, but the U.S.never drew such a line). The Nazis won their case, right up to the Supreme Court. In fact, ‘everyone won’ –

The Nazis ‘beat the Jews’, but of course cancelled their planned demo in Skokie (knowing that, despite the law, they would have been killed)

The Jews finally stood up to the Nazis and prevented them from doing what they wanted.

The authorities prevented a bloody fight.

Cleverly, at the end of the movie, the main protagonists spoke to the camera:

Danny Kaye played the character, Max Feldman, But, in fact, I know that they swapped identities in the movie, and he actually played the part of Sol Goldstein, a dental manufacturer whom I knew well.

Another twist is that the part of the character they called Sol Goldstein in the movie was played by David Hurst, another Austrian refugee (like my father) and a good friend of ours when he lived in London. The character had seen his mother ‘chosen’ by a flick of an officer’s baton to go to the gas chamber. He did nothing – because he could do nothing. But now, in Skokie, in free America, he made sure ‘it’ would never happen again. He led the often helpless Jewish community to make ’the stand’.

Kaye’s wife in the movie was one of the many who were mentally broken by the Holocaust. She was never able to speak on the subject, let alone act.

Their daughter (I also knew Sol’s daughter well) had never dared disturb the typical silence on the subject. Only this traumatic event led her to asking questions, and to know when to hug.

The rabbi, the police chief, the mayor – and the Nazi – all had their moments in front of the camera. They told their unimaginable stories.

And that brings me back to Howard Reich’s book, which focuses on ‘how to move on’ without forgetting. ‘Forgiving’ could never be the subject. It is often too closely linked with ‘forgetting’, It asks too much.

When I went to Auschwitz, I realised how difficult it was to absorb the horrors, to accept what had been perpetrated. The mountains of hair, spectacles and boots makes people think, but it does not succeed in bringing the tears.

Strangely, for many people, the US mini TV series ‘Holocaust’ (1978) brought the tears. In some ways, it was the usual kitsch, but by putting names and faces to the victims, the movie was able to bring the tears. It was perhaps the first time the Germans could start not only to relate to the subject, but to openly talk about it. (Remember, it is ’easier’ to be the child of a victim than the child of a perpetrator).

Yesterday’s tennis opponent said that one should not only focus on the Holocaust, but also on the society and mood that created it. Germany of the 20s and 30s. Look around…it is frightening to see signs of the same atmosphere in so many countries.

And for that, I suggest re-seeing ‘Fiddler on the Roof’. Yes, many peoples are in similar danger, but I am focusing on the suffering of the Jews; the anti-Semitism. See ‘Fiddler’ for its music, the warmth of true family life, the gentle breaking of old and senseless traditions. But see also the appearance of life’s oldest prejudice. How else can one explain Shakepeare’s Shylock and Dickens’ Fagin?