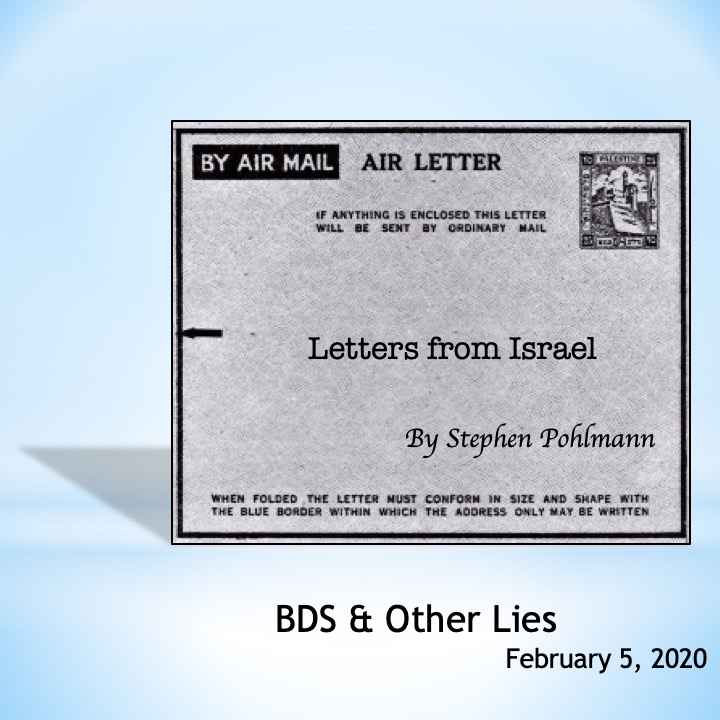 BDS and Other Lies

Only 2 persons have ever actually asked to be taken off my ‘Letters’ mailing list. The first disagrees with most of what I write to the extent that our friendship was in danger. It so happens that he/she is now back on the list, and, so far, no acrimony.

The other, and I again want to protect his/her identity, asked to be removed from the list because politics, especially that of the Middle East, was too heavy for him/her. Let’s make him/her a her…I can mention that she is a devout Christian. We met recently, and she mentioned how concerned she was over what she has been told by members of her congregation, primarily about how badly Israel is treating the Palestinians.

When we spoke more, there was no doubt in my mind that here was needed a more detailed response. There was confusion between Arab and Muslim, between Muslim and Christian, between ‘Palestine’, West Bank, Occupied Territories, Gaza and Israel.

The BDS movement – oh, look it up – denies it is anti-Semitic, admitting only anti-Zionism. Well, thank-you! The most they can/should be is to be against Israel politics. I’ll take that and argue however I can. But when an anti-Zionist denies the Jews a right to a homeland, that’s anti-Semitism.

Everyone has a right to a homeland. That includes the Armenians, the Kurds, the Tibetans. It means those who have NO home. The Arabs have many homes.  If Arab countries were a little more ’tolerant’ and a little less ’tribalistic’, the Palestinians would have been settled, with many staying in Israel, as is the case.

And if Israel had existed prior to the rise of Nazi Germany, perhaps, as a result of the 1917 Balfour Declaration, the Holocaust would have been avoided.

The Palestinians think they deserve their own little country, like the Cornish, Scottish and Maltese. (And to think that Israel used to be ’the tiny country in the enormous Middle East’. Now the Palestinians refer to Israel as the Goliath…). There never was a Palestinian country. Those Arabs/Bedouins who lived alongside Jews in the area never lay claim to a country. That is, until the Jews were given theirs. Forget the obvious reason the Jews deserved a country, the Arabs suddenly decided that a) they wanted a separate country, and b) they did not want an Israel next to them.

And it also needs to be remembered that it was several Arab nations which attacked the newly-independent Israel in 1948. (Interesting how they would have handled the ‘ownership’ of the land’ had they won that war. The Palestinians would likely have got nothing).

In 1947, the UN decided that the Jews did deserve a country. Strategically, the decision to create 2 countries was a potential disaster. (The West made a mess of most of the areas they cut up and created in the Middle East). There was actually no moral reason to divide the country. The Jews had every incentive to ‘learn to live with their neighbours’. For they were in an enormous minority.

But the Arabs were ready for neither decision: no Israel nor a divided country. They Arabs attacked…and lost. (In fact, the result was a stalemate: The so-called West Bank was in Jordan’s hands. Gaza was in Egypt’s hands. Neither country handed over the land to ‘their Palestinian brothers’. Both annexed those lands). The 6-day War in 1967, however, was devastating. Israel gained large swathes of land. They initially did NOT annex the land, except Jerusalem. They initially tried to negotiate land for peace. A resounding and infamous ‘No’ from the Arabs.

The Arabs started that ’67 War, they lost it, and yet they persistently demand to go back to pre-67 borders. They stole chutzpah from the Jews.

Anti-Semitism – undeniably the oldest prejudice. Some say it goes back to the Christians blaming the Jews for the death of Jesus. But the Jews were exiled from their lands long before that by several civilisations. The Egyptians’ treatment of the Jews was not exactly friendly.

Since then, the Jews have mostly survived by strictly keeping to their religious traditions, and that has further antagonised the mainstream. No one likes others ’to be different’. And if that difference includes education and the resulting success that education brings, the prejudices only increase.

No wonder the religious Israelis are concerned that their new identity – Israeli – creates a situation where secularism takes over, resulting in less prejudice and less reason to be defensive.

Isn’t this ridiculous, having a prejudice against a people for thousands of years? It is a human weakness. Yes, we profile everyone and anything that comes into sight. But that does not, nor should not mean that we label them as bad.

My friend worries about the unfair treatment of the Palestinians in Israel – The Arab Israelis. At a recent debate organised by the INSS, Institute for Strategic Studies, 3 leading Arab Israelis gave their opinions re Arab society in Israel.

No. 1 was born and grew up in Israel. She had some problem entering University; had to wait 2-3 years to be at the same level as Jews who served in the Army. (I did not understand that; Arabs may not have to serve the military, but they certainly can make National Service in so many other ways). So she studied in the West Bank. But now was a successful entrepreneur in Israel.

No. 2 was Bedouin; initially chemistry Prof., but then became regional head of Bedouin areas in the Negev. He fights for their rights, but clearly exposed the difficulty of bringing his people into the 21stC. He proudly told of the advances in their society: greater education, much-increased female rights, reduced crime etc.

No. 3 is leading prof., now in his 70s, again clearly and proudly stating the advances the Arab society has made in Israel, despite the enormous obstacles. He was equally critical and thankful of and to both sides.

The Israeli Arabs have official equal rights. They have passports, they vote, they have elected members of parliament (15 out of 120 I believe), they have judges, doctors, entertainers, industrialists. Despite every obstacle, despite the critics of the outside world, the Israeli Arabs officially live as equal citizens in the State of Israel. As I often repeat, if they complain about being treated as 2nd class citizens, they are no better or worse than other minorities in Israel (Russian, Ethiopian, Moroccan Jews in Israel, African-Americans and Mexicans in USA, Turks in Germany, Algerians in France, Greeks in Australia).

In Israel proper, there is overall integration of the 2 communities in areas of work and daily life. Homes are still fairly separated, but there are already many mixed urban areas.

These are 2 peoples who traditionally and culturally centuries apart. Considering the pressures, considering Israel has hardly had a day of peace from their Arab neighbours, the integration of Arabs into Israeli society has been fantastic.

In the ‘disputed area’ of the West Bank, considering the potential of conflict, there is relative stability. This can be seen from the thriving Arab towns, universities, industrial areas etc.

Only in Gaza can one admit to zero integration, as every Jew left the area in 2005. Hamas took over and, like Iran, has never stopped plotting the destruction of its Jewish neighbour.

The recent map drawn by Trump’s ‘Deal of the Century’ may actually resemble the Bantustan lands created by Apartheid S. Africa, but any other comparison to S. Africa is ridiculous. Ask almost 100% of the non-political visitors to Israel, and their comment will be: “ I never imagined it would be like that”.

Don’t believe anti-Semitic comments. They are based on a mixture of total ignorance, hatred and… anti-Semitism.