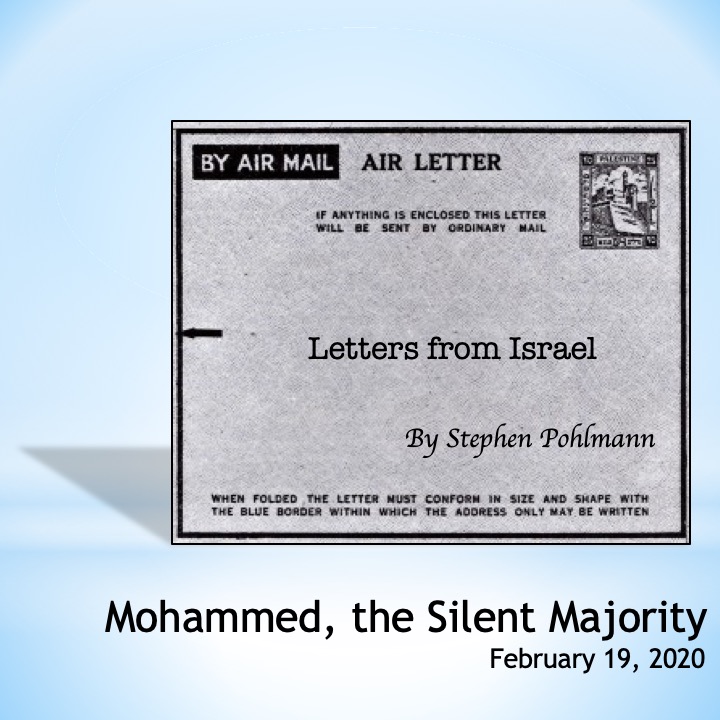 I am finally ready to send the next ‘Letter’ on the complex subject of Trump’s Deal of the Century. But that is now delayed slightly….

For years I’ve referred to ‘the Israeli Arab’. And several times, I’ve attempted to talk to him. But so far without real success. Some years back, I met an Israeli Arab periodontist at the Israeli dental expo. We arranged to meet a few days later for coffee on one of Tel Aviv’s beaches. We spoke for perhaps 4 hours. We became ‘acquainted’, although both knowing that we could not become friends.

For me, the clue was that he referred to himself as ‘Palestinian’, and spent much of the time complaining about Israeli treatment of the Palestinians, whether inside or outside the borders.

3-4 years ago, I chatted with Arab students at Tel Aviv university, who were demonstrating on the Uni plaza on Independence Day, the day they call ‘Naqba’ (catastrophe). Again, I was speaking with ‘activists’ whose raison d’être was to protest Israel’s behaviour, if not its very existence. My chats with them got me nowhere. And had I then tried to talk to the Jewish students on the other of the plaza (and the other side of the worried police), I would also have gotten nowhere.

Another time, I organised a virtual poll of Israeli Arabs, noting their responses to the usual questions, but extracting from them a second set of off the record responses. That virtual poll was the nearest I got to extracting the truth from the ‘silent majority’.

Well, this morning, that all changed. I met the silent majority.

I had to take a long taxi ride. We had to deliver 2 of my grandchildren to school outside Tel Aviv and then return during the morning rush hour (another story). We had time to chat. We started with grandchildren, but soon opened the subject of politics. His name is – let me change the tense to the present – Mohammed. (I am copying this to him – in fact, I shall first ask him to OK the content, before I send out the email, although I am 99% sure I shall not have to change a word).

Mohammed is Muslim. His family have lived here for some generations. He says they owned property in a mixed village in the north, which was taken away from them after the Independence War in 1948. They were not properly compensated, the first of several compromises his family made to become the contented citizens they are today. He and his immediate family lived many years in the Florentine, the very centre of Tel Aviv. That area has become perhaps the trendiest neighbourhood in the country. He and his wife left the apartment to one of his kids and their family, moving to Jaffa. For about 100 years, after the Jewish population left to establish the neighbouring city of Tel Aviv. Jaffa was mostly populated by Arabs, a mixture of Muslim and Christian.

In recent years, there has been much development in Jaffa. Terrific residential architecture has appeared, some with magnificent views of the old port. Many Jews have moved in, with much concern about integration.

In Mohammed’s apartment building, there is a real mix of Jews and Arabs. And they not only tolerate each other, they are friends. They socialise a lot together; they leave keys with each other for security.

He is a happy Israeli, even proud of his status, having cultivated a loving family environment. He quite obviously would not wish to move. Israel is their home.

Observations – all touched upon here and there in my ‘Letters’ –

Don’t ask him to place hand on heart to a flag that bears Jewish symbols, nor sing the National Anthem that ‘hopes’ for the betterment of the Zionist state. The ‘Nation State law’, introduced in July 2018, was, in the opinion of many, including me, an unnecessary reminder of this country’s status. The wording ‘Jewish State’ is unnecessary. We all know what the Israelis want, but it is better described as a ‘State for the Jews’. Both provide a home for Jews, but the latter is more tolerant to its non-Jewish citizens. Unlike most of the neighbouring Middle East countries, Israel always intended to be multi-religious, multi-cultural.

The fact that, for extremely obvious reasons, it always had and has to maintain a Jewish majority is a no-brainer. (Do I have to remind the World that, had Israel existed before WWII, say in 1917 with the Balfour Declaration, there would not have been a Holocaust).

Yes of course he has much to complain about here. But he realises – he knows – that his people, his community, are in the same boat as other minorities here. They just happen to be Jewish – such as the Ethiopian and the Russian Jews, our most recent immigrants. That’s the same the World over.

Mohammed is critical of the Palestinian and other Arab leaders. For it is quite obvious that, since the establishment of Israel in 1948, despite the wars, the attrition, the various anti-Semitic and/or anti-Zionist activities, Israel is a thriving country. Just about every tourist will attest to that.

He agrees that this is where Gaza and the West Bank could have been. There were multiple opportunities to co-operate, and all were missed.

I could go on – and perhaps will. I am hoping that Mohammed and I keep in good touch, and we could be a good example of the quietly-growing ‘peace and security’ to which so many, including the Trump Plan, refer.

Mohammed is a proud Israeli; just don’t ask him to go out and wave the flag in order to prove it. (I didn’t get to ask him, but I am sure he is in favour of Arabs performing some form of National Service – just not having to serve in the Army).

He is part of that silent majority. No matter how much I want it, they cannot be asked to stick their necks out and become activists, for then, under today’s circumstances, they would be putting their lives on the line. Like Sadat and Rabin.

You may not see it now. But I believe that this is why the Trump plan is important. For it forces us to look at the problem from a totally different direction. In fact, it illustrates exactly why a Palestine does not exist, nor cannot under the current circumstances. But it also lays out clearly how it can be achieved. The silent majority proves this.

So, finally, I can send you my ‘Letter’ on that subject….tomorrow.