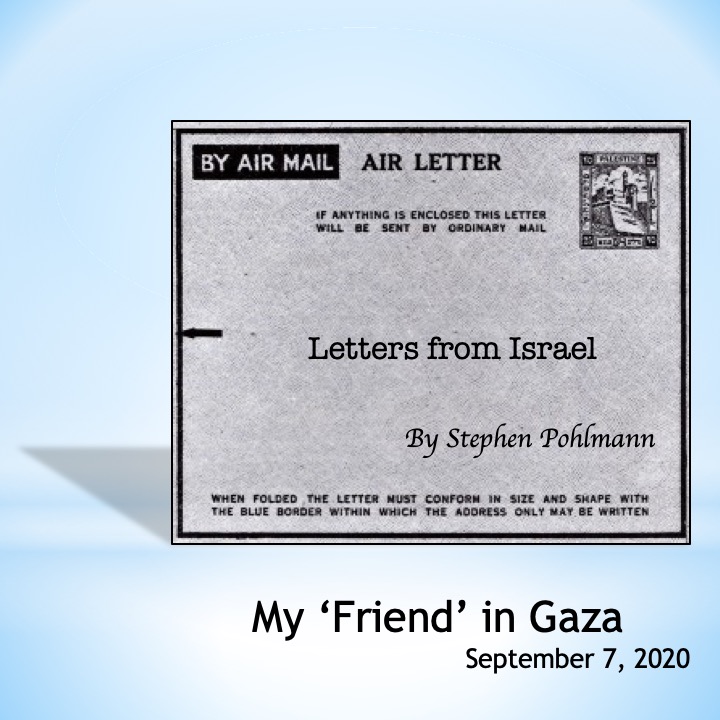 My ‘Friend’ in Gaza

Following to the expected and deserved euphoria over the agreement between Israel and the UAE, the Palestinians are desperate. For 72 years, they have been trying to carve out their own state, but have not only so far failed, but find themselves almost the forgotten people of the Middle East.

I have written so many times about them, more recently illustrating the fallen value of whatever currency they use to describe their existence and their future.

And it’s that very distant light, far dimmer than the one in the tunnel, that I’m seeking.

I remembered my ‘Gaza friend’ Manir, and decided to try to contact him again. Of all the Palestinians and/or Israeli Arabs I have met, he might be the readiest to ’see the light’.

On December 8, 2012, I wrote ‘Tunnel to Gaza’, covering my ‘visit’ to that rarely-visited place, and my meeting with Manir, devastated father of 2 girls killed by Israeli bombs. I am attaching a copy of that Letter in case you wish to read it again, or perhaps to refresh your memory in advance of reading my next ‘intercourse’ with Manir.

Or, if you prefer to read the Letter in book-form, here is the link to the ourboox.com site…

I had kept and now found the card of one of the Arab boys I had met at Arcaffé that time – Fouad. The card showed Fouad considered himself to be an industrial designer. I am not sure that, at the time I met him, he had yet qualified as such. Obviously a good salesman with a lot of confidence.

I messaged Fouad and was happily surprised to receive an answer within the hour. I called him; we chatted. 8 years had changed a lot. He had given up the designer bit. Was working with his uncle in Northern Galilee (Israel) running a small factory. He seemed happy; another one OK with the label ‘Israeli Arab’. Married, but no kids yet.

Yes, he was in touch with Manir, but could give me no details, as Hamas clamps down on any civilian contact with Israel. There have been online chats, lately Zoom of course, but these have resulted in some arrests. Some of the official traders who are permitted to cross the border are message-smugglers, and of course, there will always be cyber-communicators – let’s call then hacks – who are happy to help.

To cut a long story short, I persuaded Fouad to get a message from me to Manir. About 3 weeks later, Fouad called me; I had had a response. And so this delicate and patchy relationship started up again.

The following is a précis of our exchanges…

Stephen: Manir, I am so glad to be back in touch with you.

Manir: And I with you, Stephen.You have often been on my mind. How are you?

I am OK, considering the mess being caused by the virus.  I am force-retired, and spend much time at home – and with the kids/grandkids. I recall you have 2 children (after those tragic times). How are they both?

Inch’ Allah, they are well. And my wife and I have another child, Zara. She is almost 3. We were a little concerned at the time. Nyla is almost my age – a little old to have more children. But all went well.

That’s fantastic! I can imagine your joy.

When we spoke that time, when I visited you, we looked forward to you visiting me. 8 years of silence. I am sorry. Even now, our communication has to be secret.

But if you don’t mind, Manir, let’s have a chat as if what we say is heard by those who decide. What is the talk on the streets of Gaza City? Especially now, with the current contacts between Israel and the UAE.

Officially, we are angry. The incendiary balloons will continue to burn the fields of Israel. But on our streets, there is hurt. We feel abandoned by our Arab and Muslim brothers. The latest news about Serbia, Kosovo and now Malawi is destroying our defiance.

Can you still refer to the other Arab peoples as brothers, when, for years, there has been so much infighting? In fact, in my opinion, one of the reasons for these negotiations is that very split between Sunni and Shiite, between ’the moderates’ and Iran, Turkey and their supporters. The UAE sees Israel as a potential partner for building ‘a better future’ in the Middle East. They seek stability and prosperity. It’s partly that we have the same enemies, but more because of the need to build.

I understand what you are saying. Many here don’t – partly because they have no TV – or no electricity – because they are forced to listen and watch as Hamas dictates. Since I lost my daughters, since I spoke to you, I have tried to understand instead of just accepting. I wish no more to be brainwashed. Nyla and I often argue over this. She does not have time to listen to the illegal TV and radio channels, nor the strength to understand.

I still remember working across the border, while many others did the same, or worked with the Israelis who lived here. There was co-operation, tolerance and, in some cases, even friendships. All that is now gone.

Oh yes. We talk in some of the cafés, in some of mosques, in some of the houses. And on street corners. We have to be so careful, for their ears are everywhere. We know there is nothing we can do. Hamas are in charge. I have lost friends; some just disappear. Others have accidents. Some just change their minds, and don’t tell us why. We cannot confide in them any more. I read a book once about East Germany. It’s become similar here. We don’t know what to trust, whom to trust.

But surely you’re in the majority. Can’t you protest? Demand elections?

Stephen, you are so naïve. Hamas needed only 1 election: the first. From then on, they make the rules. Abu Mazen is the same, and Hamas hates him. He promised elections after 4 years, and 15 years later, he’s still here.

The UAE are becoming ‘friends’ with Israel. Others will undoubtedly follow. Are they traitors?

You are forcing me to say things that are against my…my will. We are back to the subject of ‘brothers’ again. Brothers can turn on their brethren. The fact is that the tribes work together until they can’t. Then they turn and work against each other. It has always been like that. For a while the existence of Israel appeared to unite the Arab nations. The Jews were invading our lands and, even worse, they were winning. Israel is still here. And not only here, but has become a strong country. Three generations have come and gone, and we have gained nothing. Some of us are beginning to realise that we have been taken along the wrong path.

So you now blame Arabs for your situation?

Ha, you cannot catch me so easily. Still much of the blame lies with the Jews. But we have made many mistakes.

And now? What next for the Gaza people?

I see only 1 solution: a complete turnaround by the Hamas leadership. Perhaps forced by their Qatari sponsors. Perhaps the virus crisis, which is shared by all, can be the link.

My own experience shows that war and aggression can solve nothing. At the end, we must be friends.

Manir, there are surely many others who think like we. I shall try my best to spread the word, to help the walls start to crumble. Like it or not, we are neighbours. The wall between us has to be destroyed.

Manir is a plumber by trade. He hinted that when the borders come down again, when we get back to where things were before Hamas, he will be among the first to get a job in Israel.

(As mentioned in my previous book on the subject of Gaza, none of the above is true – not even based on the truth. But it could be).