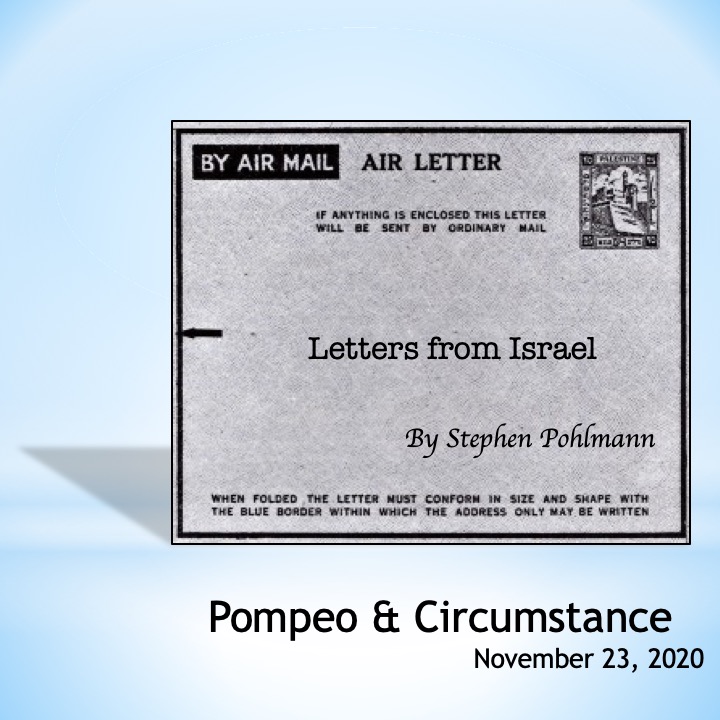 (One or two friends have complained that they do not receive my Letters. I have corrected the listing as best I can, but if any of you still do not receive this letter, please let me know asap).

I was going to say that nearly everyone can’t wait for Trump to go, but it’s sure that at least 73 million voting-age Americans would argue against that, plus their kids. And you have to add to that a large number of Israelis.

No matter how many did and still do support the Democrats, it is certainly a fact that only Trump went ahead and made decisions that benefit Israel. To prove to some friends that I was not ‘blind’ on the subject, whereas I totally supported the recognition of Jerusalem as Israel’s capital and the move of the US embassy from Tel Aviv, I did not feel it necessary to re-define the Israeli state definition. And the Golan Heights? Another fait accompli that did not need a stamp.

Israeli settlements in the West Bank? Now that’s a biggy. Trump is going to do a lot of ‘antagonising’ during his last days in office. (Yes, I do believe these are his last days, and that, although he may not turn up on Inauguration Day, he will have decided by then to actually leave the White House). 4 years ago, Sec. of State Kerry made a speech that practically shat on Israel.

And on Dec 23, 2016, he and Obama arranged for US to abstain (instead of the usual veto) against UN resolution 2334, which not only declared the West Bank and the settlements to be illegal, it included East Jerusalem. The Temple Mount, our most sacred spot,  aka …oh, whatever its name is in Arabic.

So, before you utter the usual screams about Pompeo and his like, spare a thought about his visit to the West Bank. (Specially cute story of his lunch and chat with Yaakov Berg, a former Soviet immigrant who started producing wine as a hobby, and now runs an award-winning winery on West Bank hilltops).

And his assurance re the release of Jonathan Pollard, the Israeli caught spying on USA, who’s been locked up / confined since 1987…

Now it was announced that Netanyahu hopped on a private jet and spent a few hours – for the very first time – in Saudi Arabia, visiting Mohammad Bin Salman, the Saudi Crown Prince, commonly known as MBS, during Pompeo’s stop there.

This is a redefining moment. Until now, ‘Middle East’ always meant ’the Arabs’. It never included Israel. Now it does, and the split is no. longer between Israel and the Arabs, it’s between Iran, Turkey, their buddies, and the rest, including Israel). Israel has much to offer; the number of meetings that have already taken place between Israeli companies, organisations, think-tanks etc. and their counterparts in UAE, Bahrain and Sudan is stunning. We can take it for granted that behind-the-scene negotiations have been held for some time before.

Of course, as everyone has either noticed or mentioned, among the big losers are the Palestinians, who just refuse to see what’s happening and how futile their continued obstinate stance is. This is such a great opportunity to ‘cut their losses’ and start building their potentially great little nation. (For the Middle East is filled with ‘great little nations’).

You wait; this is nothing compared to what’s coming out of the W.H. during the next 2 months.