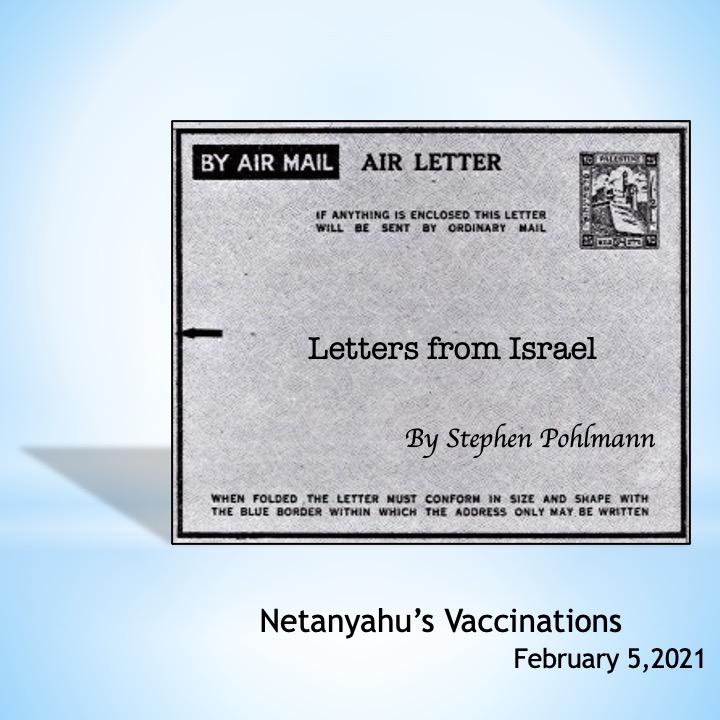 There was a week or 2 during the pandemic when everyone admired Israel for keeping the situation under control. Looking back, it would appear to have been temporary blindness, for we soon joined the masses and hit new negative peaks.

But as far as vaccinations are concerned, it really does look as though we shall be the World-leader….to a point.

It starts with the fact that we are a small ‘developed’ country, with borders as tight as an island. Add to that, that we have an excellent med. health system – 4 health funds somehow competing successfully with each other. Everyone has to be a member of (at least?) one fund. And, with an extra payment, we can receive ‘better’ or ‘more privileged’ service. My recent back op went through within a couple of weeks of the MRI results, and it took place in Herzlia private hospital. Terrific…

And then there’s the fact that Israel is ‘ready for any emergency’. Not only the services are prepared, including the military, but also the mentality of the people to accept such crises a little more easily.

All the same it easy for Netanyahu and Min. of Health Edelstein to make a deal with Pfizer. You provide us regularly with enough vaccines, and we’ll provide you with the data (minus the names, of course). So, every Day, a big shipment of the Pfizer vaccine arrives at Ben Gurion; everything’s in place.

However, don’t think it’s all going to be rosy. The PM is aiming to have 90% of all over-50s vaccinated in the next 2 weeks. Today, the vaccine invites officially go out to the rest of the adults – i.e., the over 16s. But the vaccine centres are noticing a big drop in the demand. Most oldsters want to get the jab. Bu the younger generation either think they don’t need it, or are in the large category of the refuseniks.

So Netanyahu’s wish to use the fantastic results as a boost to his chances in March’s election is meeting an obstacle. To overcome this pandemic, several things have got to be sorted out –

* How much protection does the jab give?

* Is it now guaranteed that we cannot transmit the virus?

* What about all the mutations. It’s fingers crossed that the vaccines also work for these.

* And if 1 vaccine works, there’s no guarantee that the other works. E.g., some worry that Moderna has little history to prove it’s viability…

* And then there’s herd immunity. We need, say 80% of the population inoculated in order to protect the whole. Yes, the more success the vaccines have, the more ‘reluctant ones’ will come forward and get their jab. But the anti-vaccine movement is strong. And, with the current intro of the green passport, they will become more defiant. How DARE we threaten them with exclusion because they have stuck to their right to refuse the jab. They say that ‘no jab’ might prevent them from working in certain environments, such as teaching. Sounds drastic and wrong. But if we cannot prove yet that the jab is foolproof, can you fault the parent who wants their kids to learn in a ‘risk-free’ atmosphere?

That’s not fair, say the refuseniks. Well, in a way, it’s not – they are right. But the priorities have to be on the side of safety for the ‘masses’.

Such a touchy subject.

And this is only Israel. Like Australia, we have easily-controlled borders.  (In Australia, 1 person’s positive result is threatening the Australian Open – a sports event which is delaying some Australians’ months-long efforts to return home – I know, I have 2 cousins who number amongst them).

It may take years to render the rest of the World ‘safe’. We shall not only have the problem of protecting ourselves from our fellow-citizens, there will be other 7 billion to worry about.

You read it here first – Prof. Nadir Arbar, cancer specialist at our Ichilov hospital has been successfully using a treatment on patients brought in with the virus. Accepting that all patients admitted with Corona are seriously infected, the fact that his treatment has meant that ’several’ were sent home this week with no symptoms is spectacular.

But I had to mention it…

Election # 4 is next month. Deadline was passed last night for registering the parties to run. Summary: 99% sure we’ll have another election within the year. Prediction: Netanyahu will squeeze in with the help of the religious parties, and partly thanks to the breaking up of the Arab Joint List, which will result in the old 4 separate parties, 2-3 of which may not get the minimum votes required to cross the threshold.

Religious – You may have seen the ugly photos last week of thousands of black-clad males attending the funerals of 2 very old and very revered leaders of of 2 religious sects. They were breaking all pandemic laws. (And a day later, thousands of Arabs attended the funeral of a man killed ‘by police fire’ in a clash between rioting Arabs and the authorities).

We don’t have a constitution here. No 1st amendment. But the right to free speech is very highly held in Israel.

However, the laws of the pandemic just come first, and these gatherings will kill many – in- an outside these communities.

Arab political parties? Absolutely. Religious? Absolutely not. The revered David Ben Gurion will always be remembered for the mistake of not separating religion and politics. Both are necessary (evils?) but cannot work together.

It reminds me of the fantastic duo between King Philip and the Grand Inquisitor in Verdi’s opera, Don Carlos. It’s no coincidence that both voices are bass, the vocal sign of great authority. They, via their voices, battle over matters of heart, foreign policy, defence and treason. They cannot be colleagues….