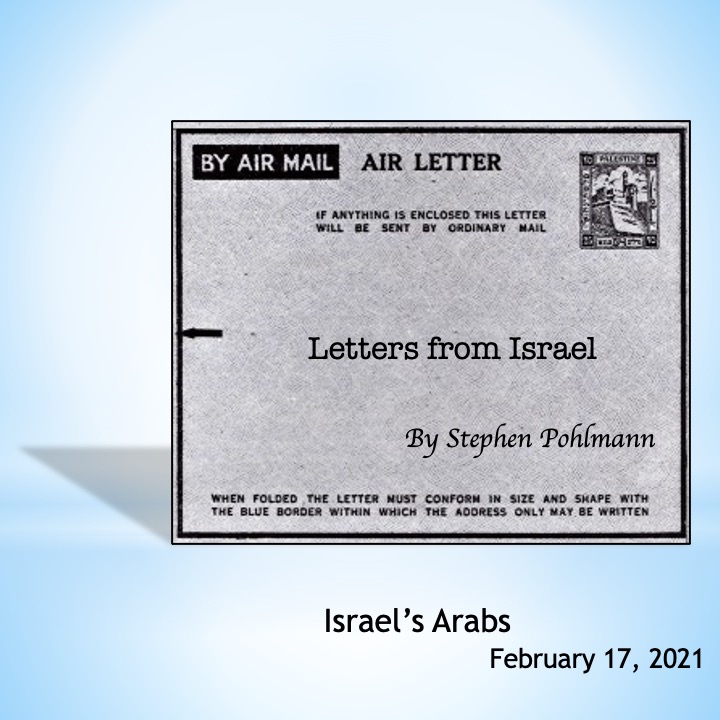 This is not about the pandemic, although our excuse for spending two nights in a Galilean kibbutz is because they have relaxed some of the rules here. Only take-out at restaurants, no sports clubs or gyms open yet, schools opened a week ago, but only for up to 9 year-olds and so on. We are doing well in Israel, but don’t hold your breath.

Today, we drove through the Keshet (Rainbow) Forest, which is located on and around Mount Keshet. A reminder that these hills, like most in Israel, were practically bare before the KKL, Israel’s Nature Society, started the almost fanatical trend to plant trees, which continues till today.

We stopped many times to see the views of the valleys below – and to enjoy the flowers in bloom, especially cyclamen and anemones, and mustard seed yellowing the landscape.

What was also special was the number of Arabs picnicking. Every table was taken; many brought their own tables. Barbecues and children everywhere, head-covered grandmas seated, while Papa fanned the flames and Mama grabbed the little ones before they were run over. E-bikes and 4-wheel motorbikes, revving to prove that noise can overcome nature. 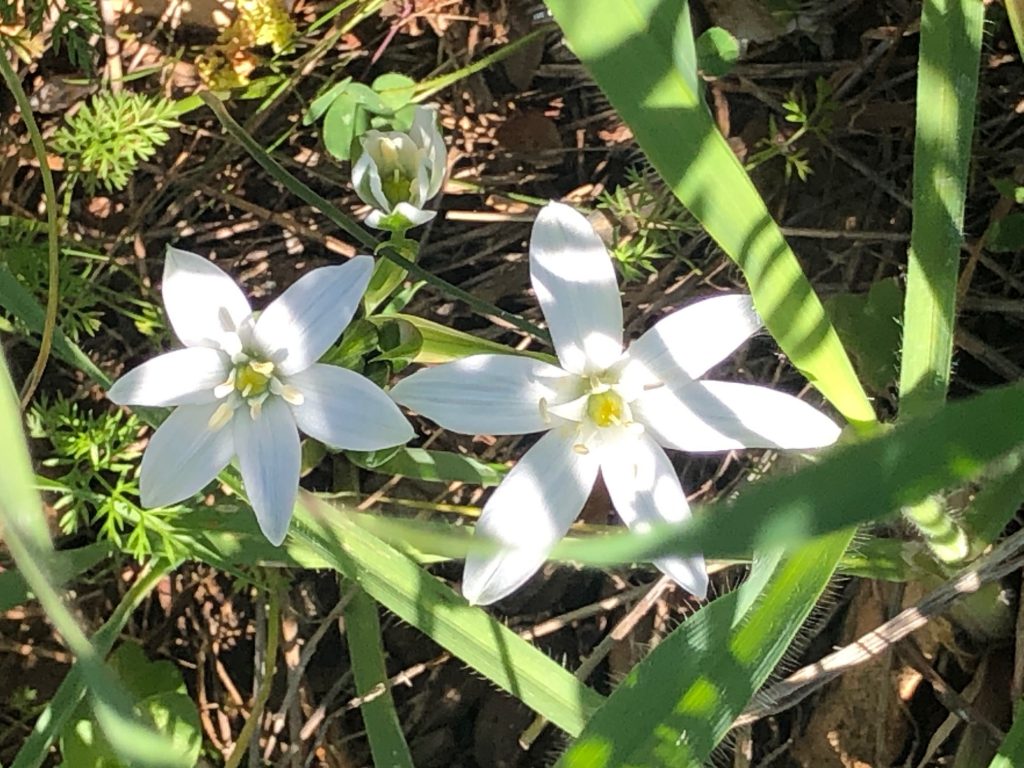 And there, across the valley, their home towns, sprawled across the slope, making sure that the neighbours behind still have a view. OK, so there’s little greenery in town; there’s no rule that says they must have trees in every street – and of course, out here, they are surrounded by green. 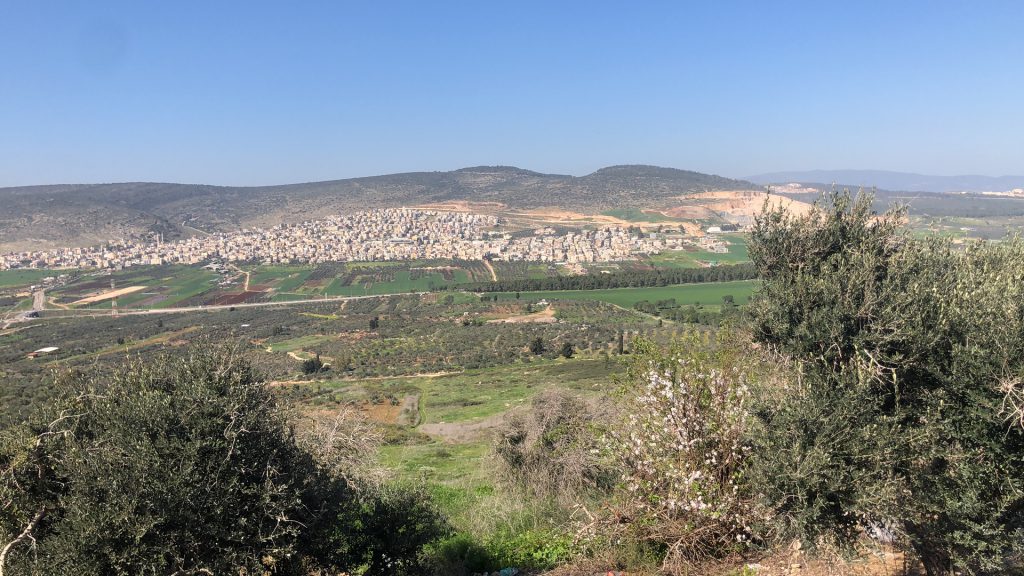 There is so much criticism of Israel’s treatment of the Arabs. ‘2nd-class citizens’ is the least of the accusations. Apartheid is among the worst.

Oh! let’s not get caught up in the exceptions to the rules, nor the fact that there are Jewish minorities in Israel who feel just as ostracised.

I’m searching so hard to make the disbelievers and critics slow down and see the reality for what it is. Why this animosity between Jews and Arabs? In fact, let me stick a foot out and change that: why this animosity by the Arabs towards the Jews? With rare exceptions, the Jews really have tried to avoid confrontation.

Let’s touch back on pre-British times; on pre-Zionist times.

The Ottomans ruled here from the 15th C – just before Aviva’s famous ancestor, Rabbi David Ben Zimra (Ha Radbaz) lived here. His family were wealthy fur traders in the Spanish town of Zamora. Following the Inquisition, they moved first to Egypt, where he became Chief Rabbi for many years. The family moved to Jerusalem when he was already old. Partly because of the high tax demands from the Turks, he moved to the religious city of Safed, where he became a leading scholar, teacher and benefactor.

Why mention this? I am trying to discover where, how, when and why the animosity began between the 2 communities. When did it change from being tribal feuds to a war that, once started, has never ended.

Jump forward again. Jump to this visit of ours to the Jordan Valley, average 200m below sea level (like the Sea of Galilee), and the Galilean hills, up to  over 1000m above.

We stayed at kibbutz Nir David…

We’ve seen dozens of old and new Arab towns and villages, places you would see in any decent society. We stood at the barbed wire border with the West Bank (that’s what the occupying Jordanians started calling it in 1948). Behind us, Meirav. Across from us, the lovely Arab town of Jalbun. If I were guiding a group of visitors, including you, I’d perhaps start here. Nice cup of tea in one hand, pointing finger in the other.

And perhaps have the pleasure and honour of having Dan Livni at our side. Dani is married to Aviva’s sister. He is an artist and art teacher. And he is a passionate follower of National Geographic, meaning that he knows and loves travelling, visiting, meeting, whether in or out of Israel. He will never tire of having new experiences, or showing others what he already knows and loves.

I mention Dan – with his permission – because he is what I try to be…believable. He has been through wars, but he does not hate. Wars and enemies sadden him, but he is ‘a sensible’ lefty. He sees the truth, but he refuses to lose belief in the good of others. 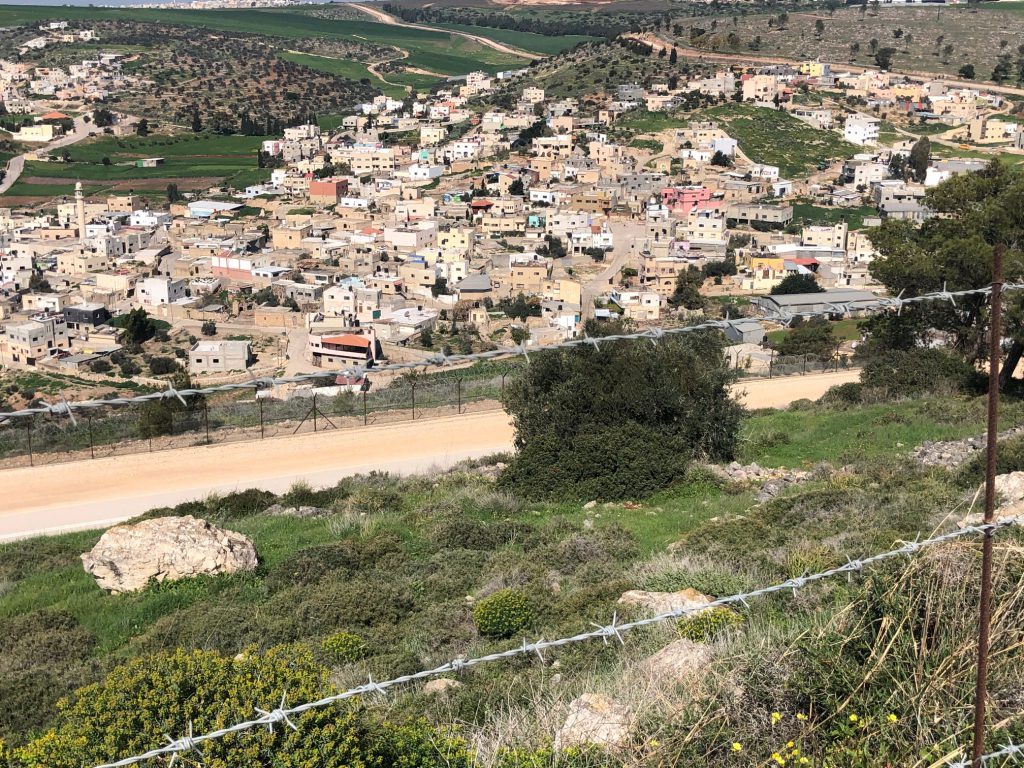 Not only have the Arabs had every opportunity to build a life for themselves, many of them actually have. And if they’d start using social media like, e.g., Trump’s followers, then the World would know that the lack of peace between the two sides is easily blamed on the Arab leaders. I can’t quite put my finger on the reasons, although tribal mentality comes into it – and corruption. No matter how guilty Israeli PM Netanyahu may be found in his forthcoming trial, he has nothing on the Palestinian (and most other Arab) leaders, vis-à-vis corruption and downright dictatorship.

We just visited an Arab garage in Beit Shean (famous for its ruins and mosaics). Dani’s car had a puncture. This guy couldn’t have been more hospitable. (Below is a photo of Dani and his Arab friend speaking the other’s language). Yes, he could potentially be at the front of an anti-Jew army.

But this same man could also easily be at the forefront of a decent mixed society. All it takes is a step backwards by UN, Europe, Iran etc. (all in the same boat), who must stop treating the Palestinians as pathetic crying refugees. Many of them are decent, hard-working, successful and happy citizens, who live in a decent country that gives them every opportunity to forget past mistakes and make a life for themselves. 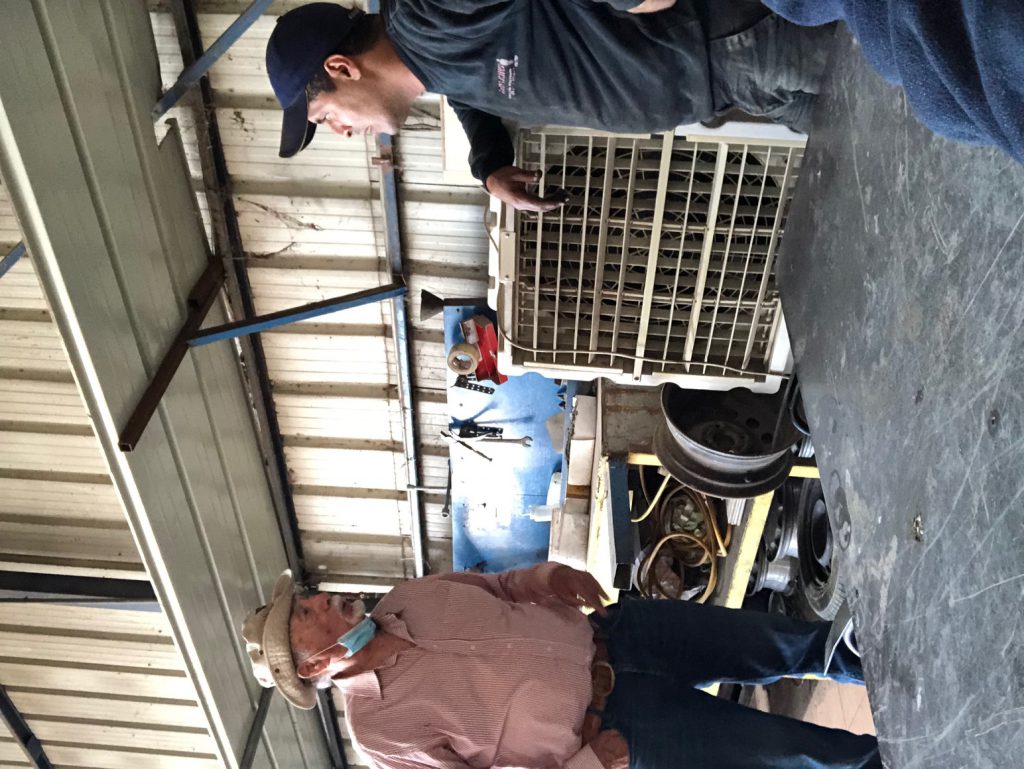 I should never have sent the Letter yesterday. We still had a day left of our trip.

On the subject of Israel’s Arabs, actually nothing to add. But, with the benefit of photos – and hindsight – there is more..

First of all, whether you have been to Israel or not, the Israeli breakfast is definitely ’something to write home about’. And to simplify matters, I am referring primarily to the meal which is served in hotels. In olden days, most decent hotels in Israel had 2 rooms: meat and dairy.

But it soon became obvious that this was wasted space and energy. Bacon and ham were rarely served anyway. So it was left to a few sliced meats and sausage to complete the ‘meat section’. Get rid of them, and what’s left: an array of goodies that brought smiles to every guest. Salads, cheeses, yoghurts, fruits, bakeries, eggs of every type. Mmmm..

But today, the dining rooms are all closed. At Nir David, every guest received yoghurts, fruits etc., plus this beautiful box of goodies, each individually packed and covered. Very impressive. Very tasty, and very practical for those wishing to take stuff with them for the later picnic. 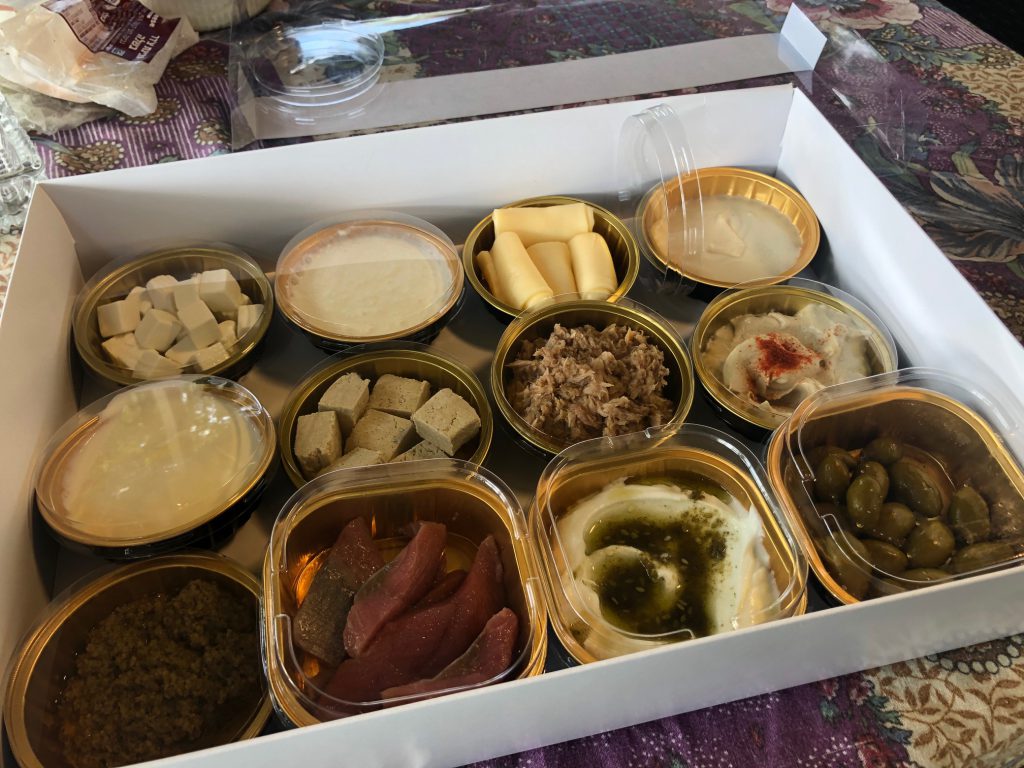 We stopped at Ein Muda, one of the beauty spots in the ’Valley of Springs’.

The following is a shot of a family picnicking… 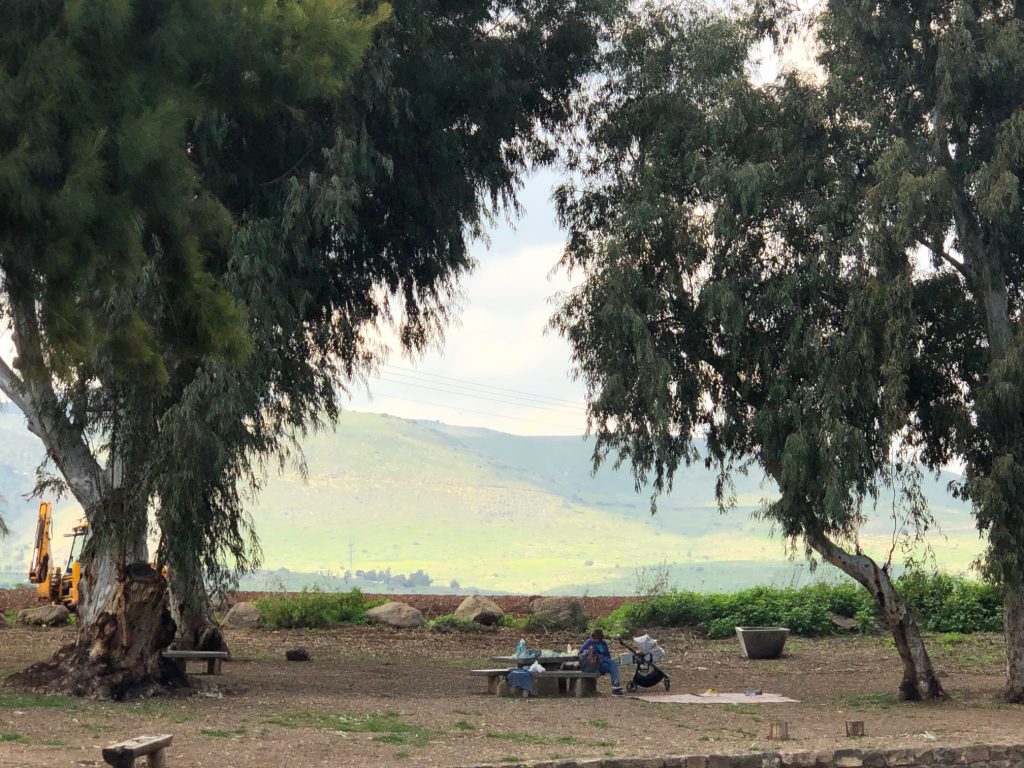 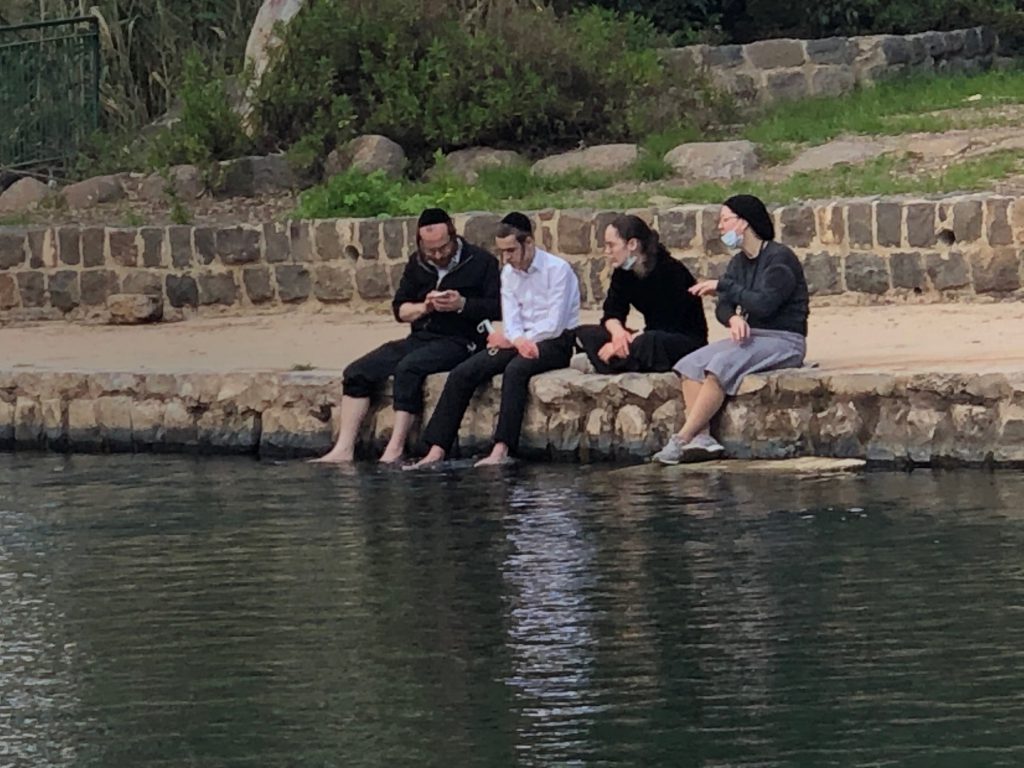 Dani & Ora investigate a tree. This is only a quarter of the roots and branches of this monster. A reminder that Dani is an artist – and nature lover. He has a passion for tree roots… 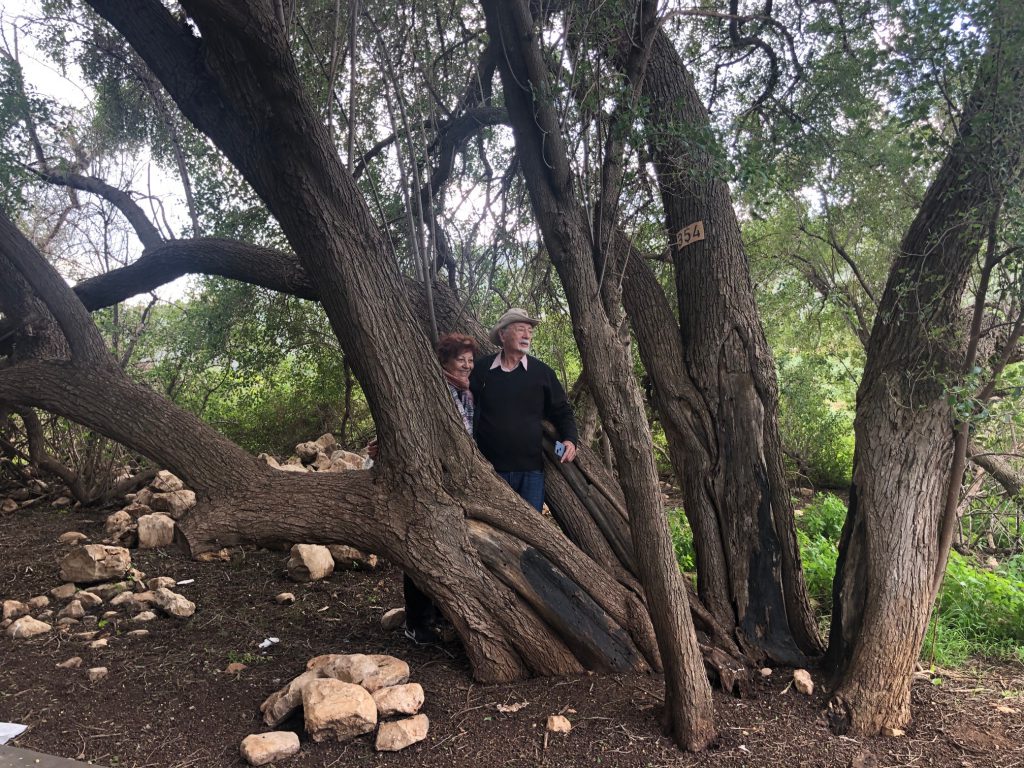 Next, 4 cute young ladies resting their bike in the shade of another of Israel’s ‘recently-planted’ trees. 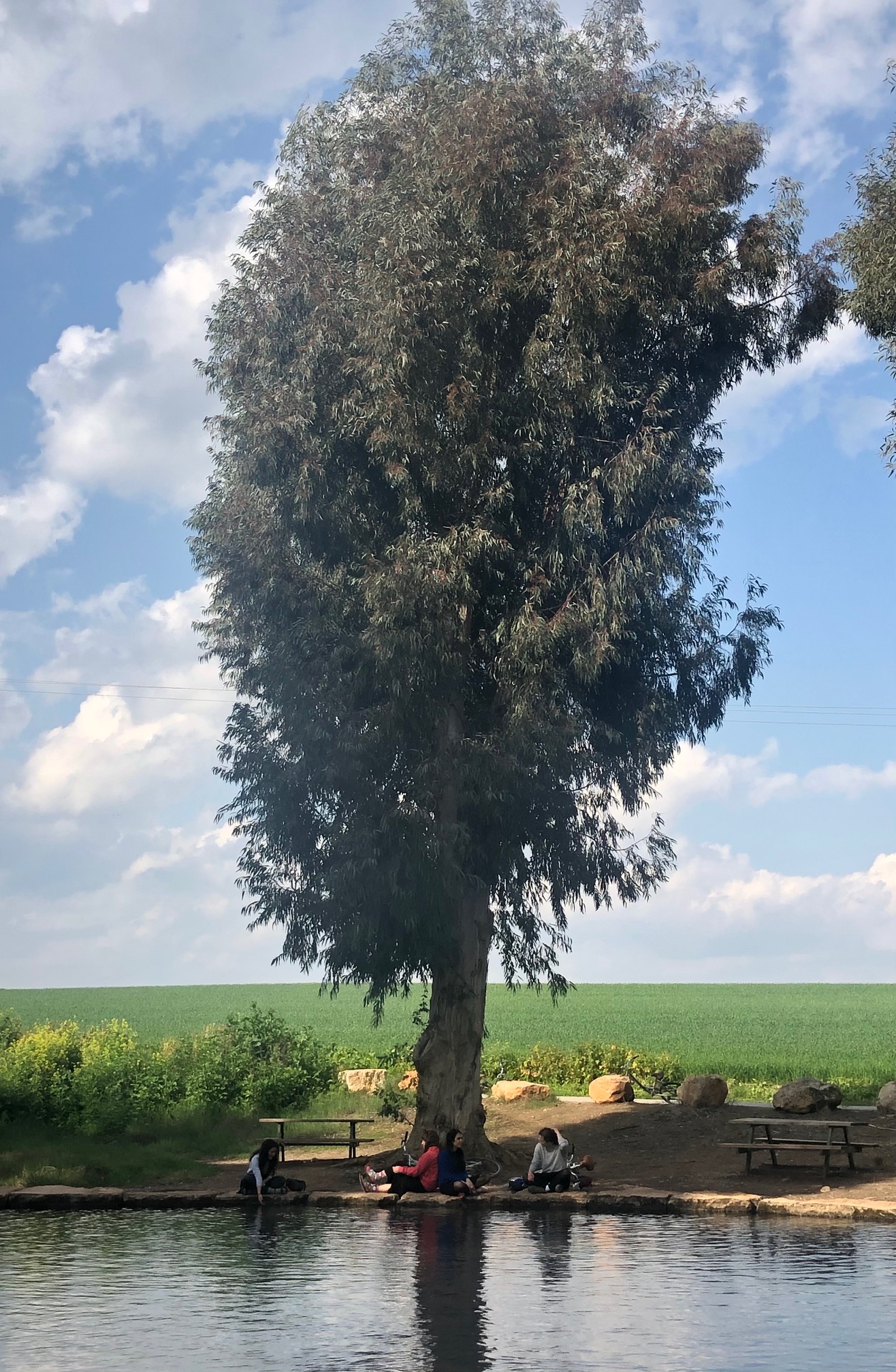 And finally…this family is less interesting. But the fantastic cumulonimbus cloud formation behind in the background gave us fair warning to get in the cars and head home. These clouds were somewhere over southern Lebanon and Syria, undoubtedly bringing snow to the mountains. For us it meant a drop in temperature, rain on our way home….and the snow now falling in Jerusalem. 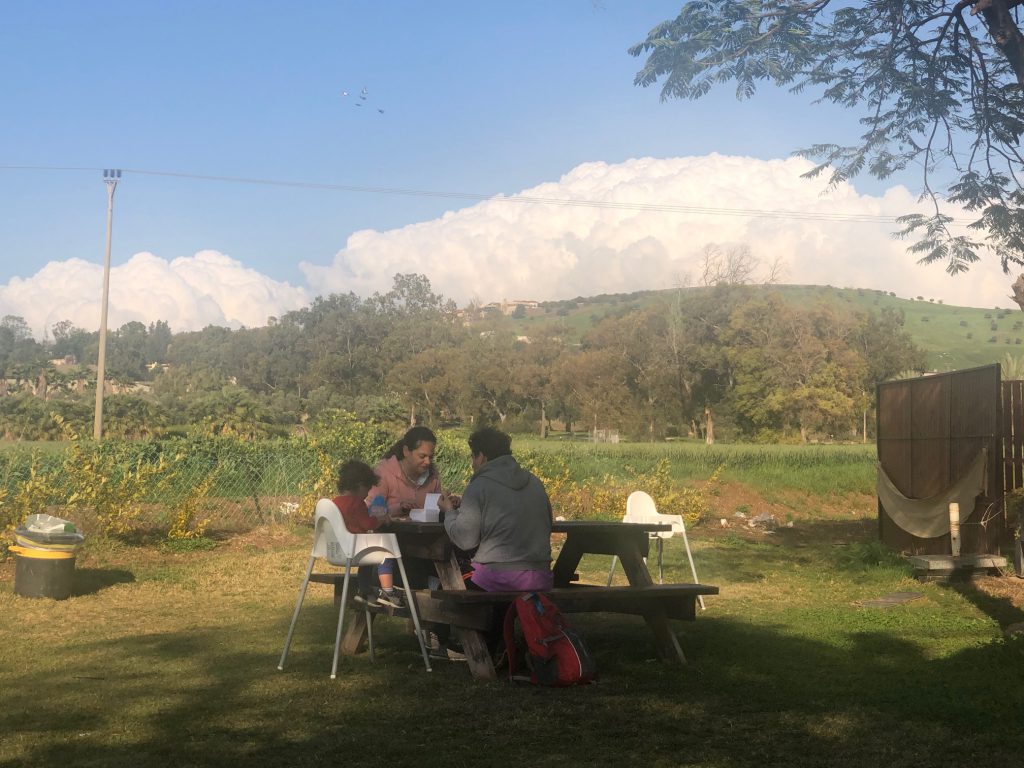