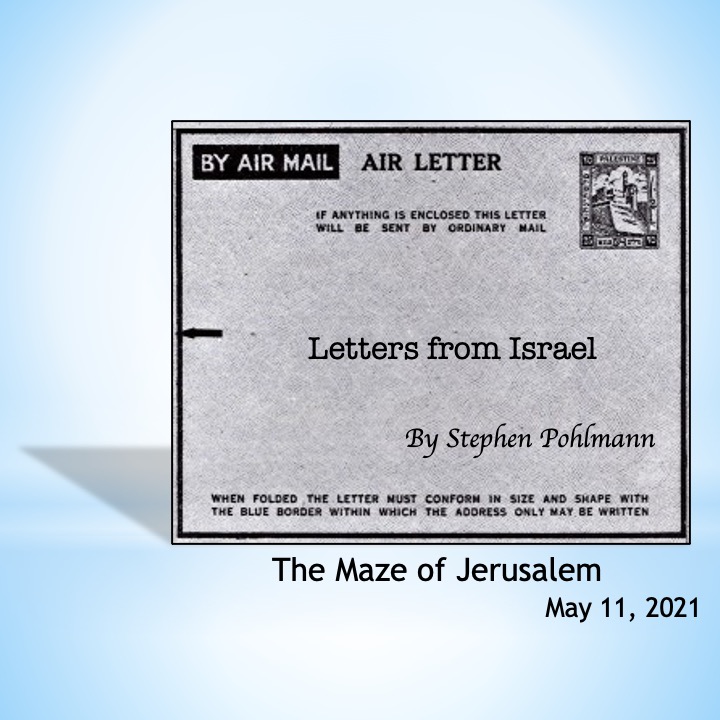 The Maze of Jerusalem

I could have written ‘amazing’, but that’s been used umpteen tines before, and hardly touches the subject. The engravings on some of the glasses in my collection are amazing. So what.

I attended yesterday’s Jerusalem Day ceremony. Our brother-in-law (he’s married to Aviva’s sister, Ora) was one of the honoured torch-lighters. While serving in the Harel Brigade, he filled his sketchbook with images of the battle for the city in 1967. Dani served in 5 wars. Somehow, despite this, he became a leading artist, an art teacher, a party-man (in the dancing sense) and the best guide to this land you could ever wish for, whether viewing it from the geopolitical point of view, or nature, or recent/ ancient history.

Crush in our ‘dressing room’ after sirens sounded

That didn’t stop her from ironing the dress for her daughter, who sang the national anthem at the end 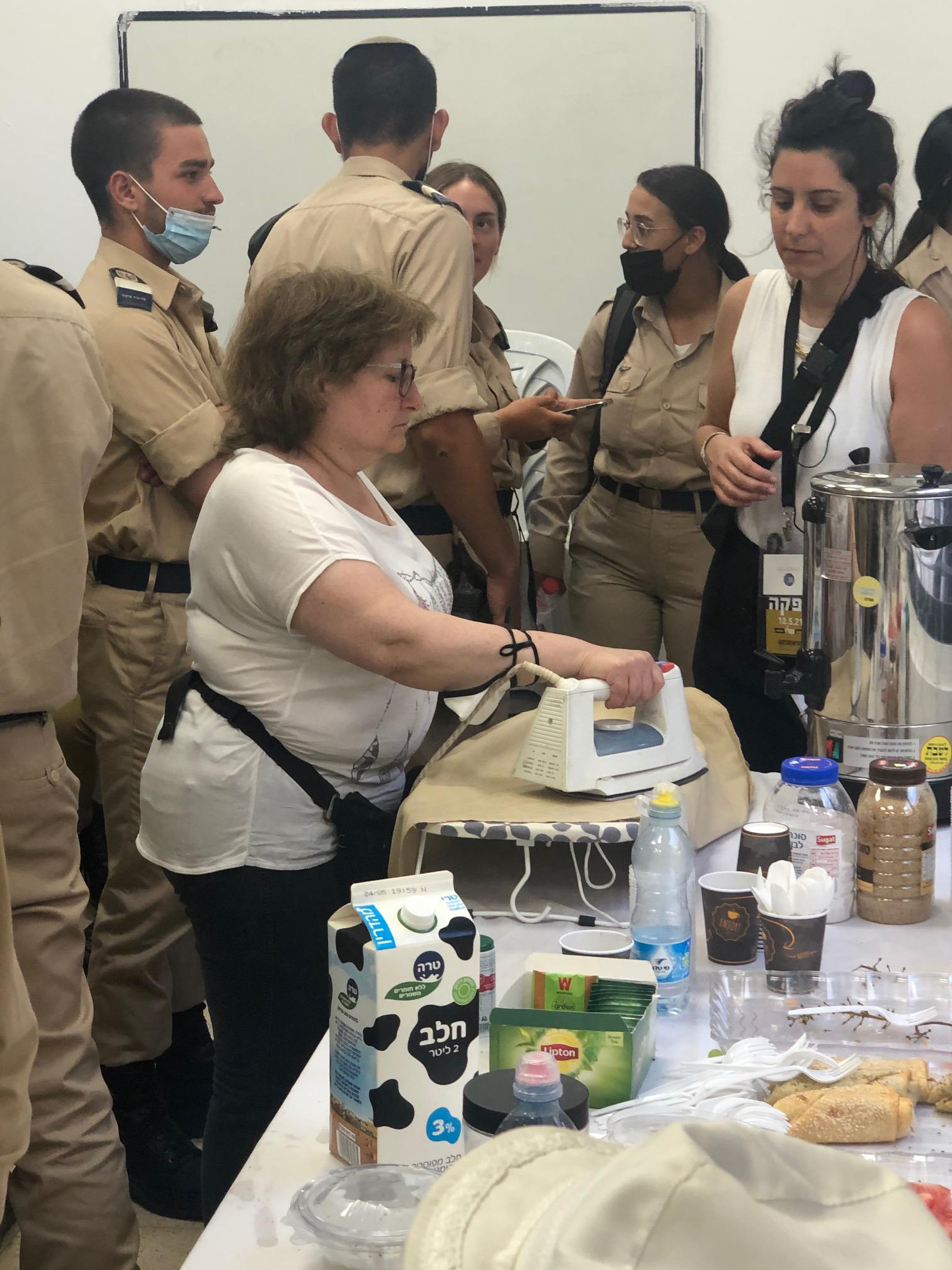 2 of Dani’s many sketches of the battle… 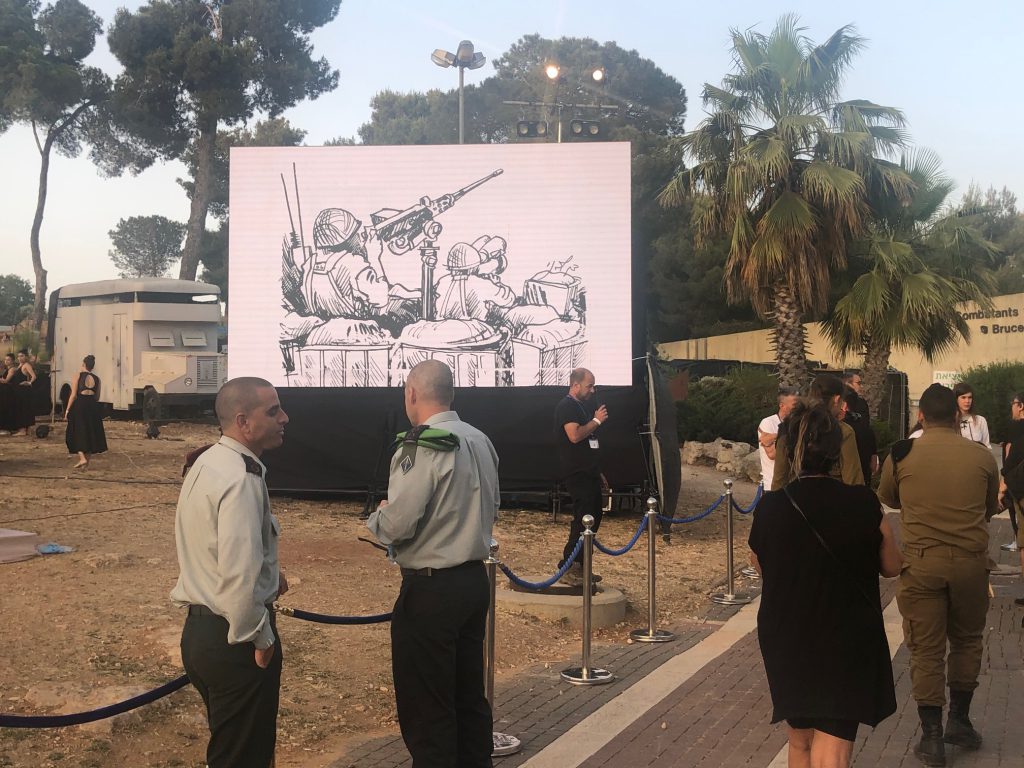 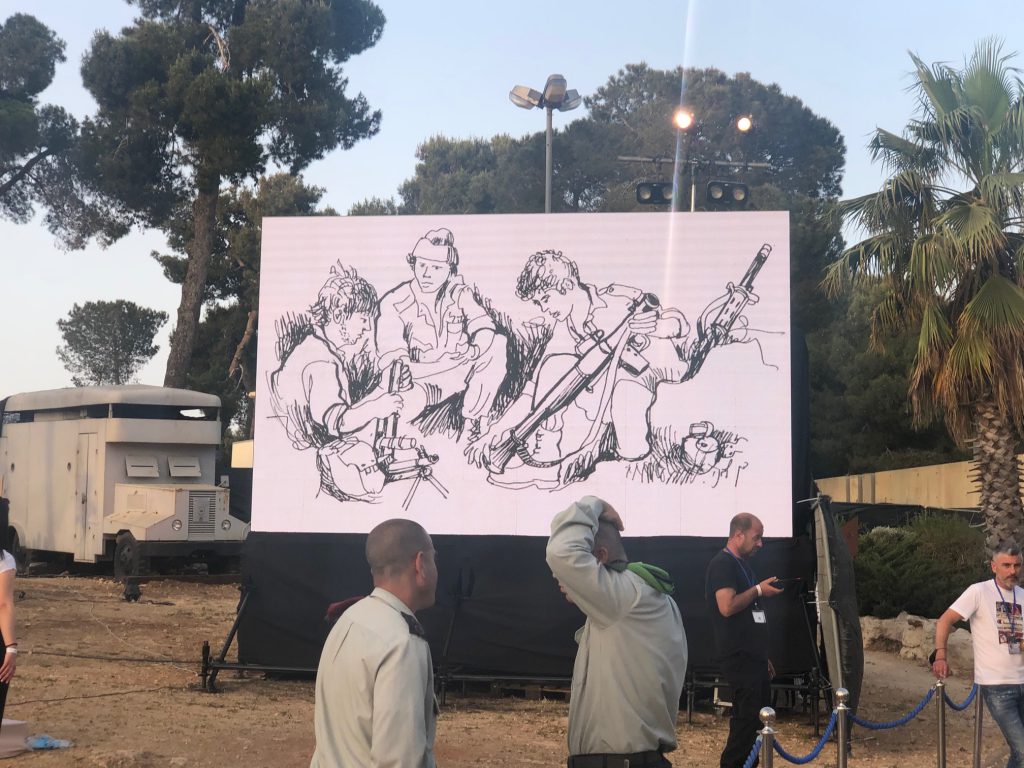 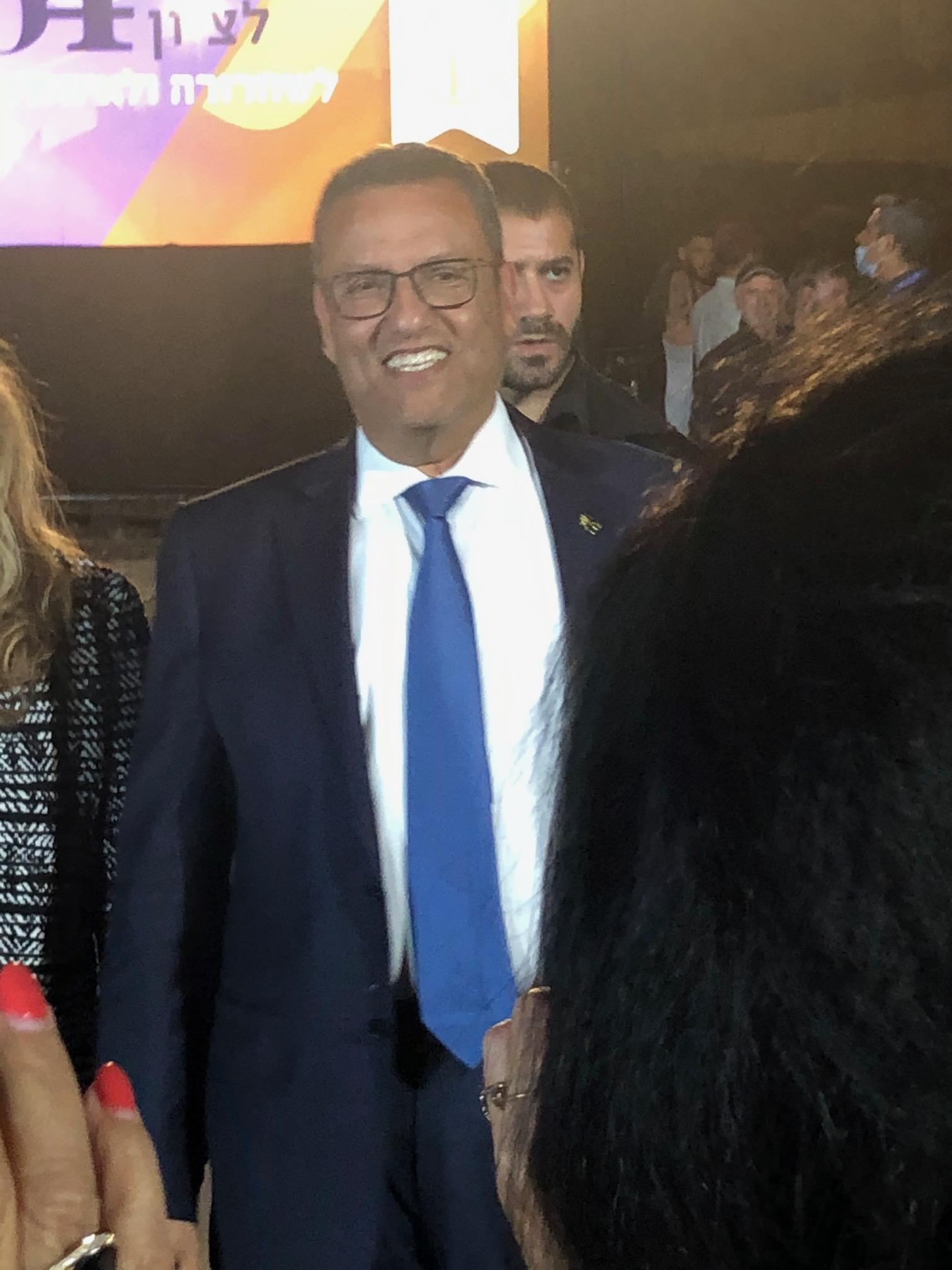 Pres. Reuven Rivlin – He still hopes for a peaceful solution. 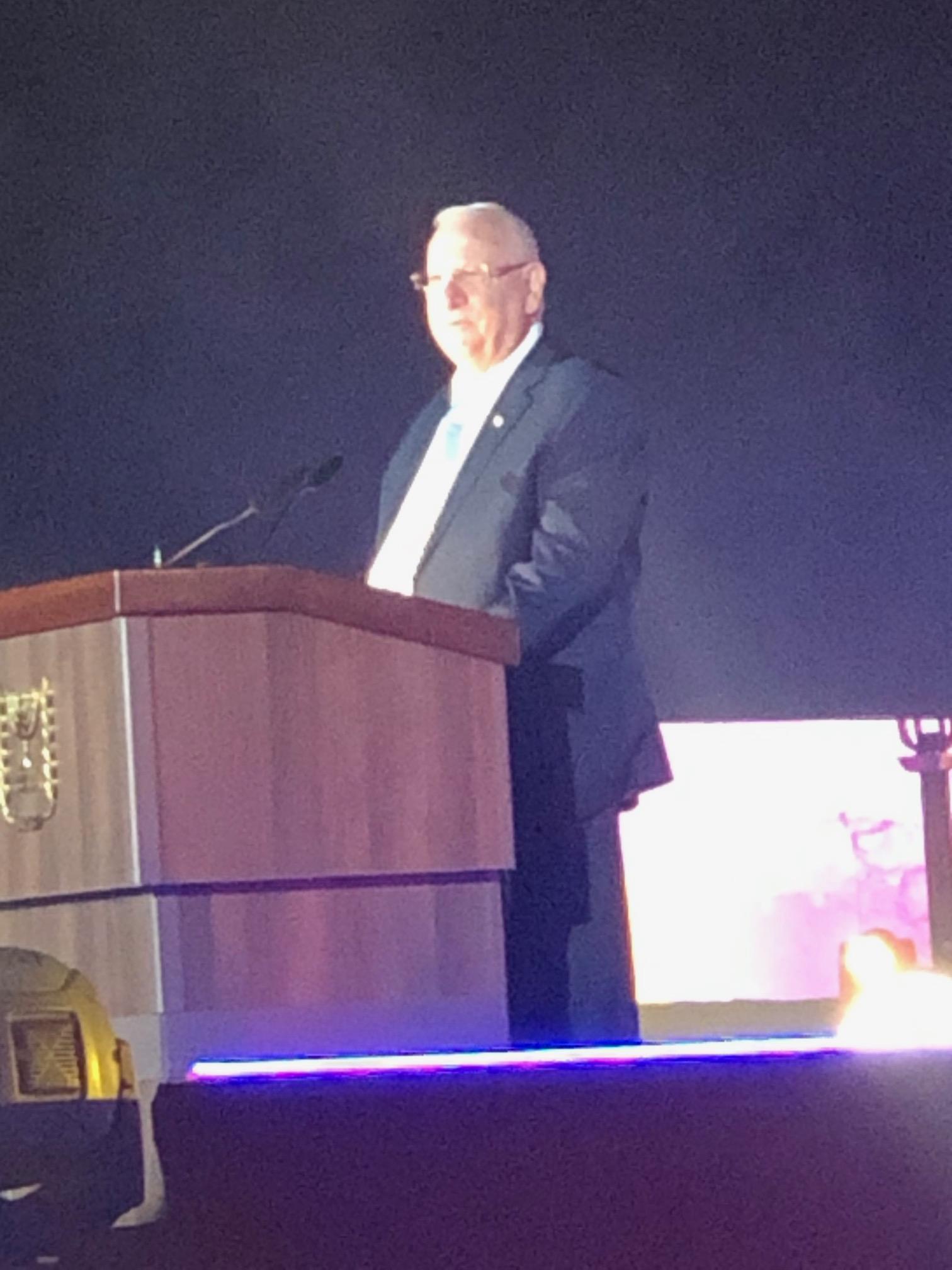 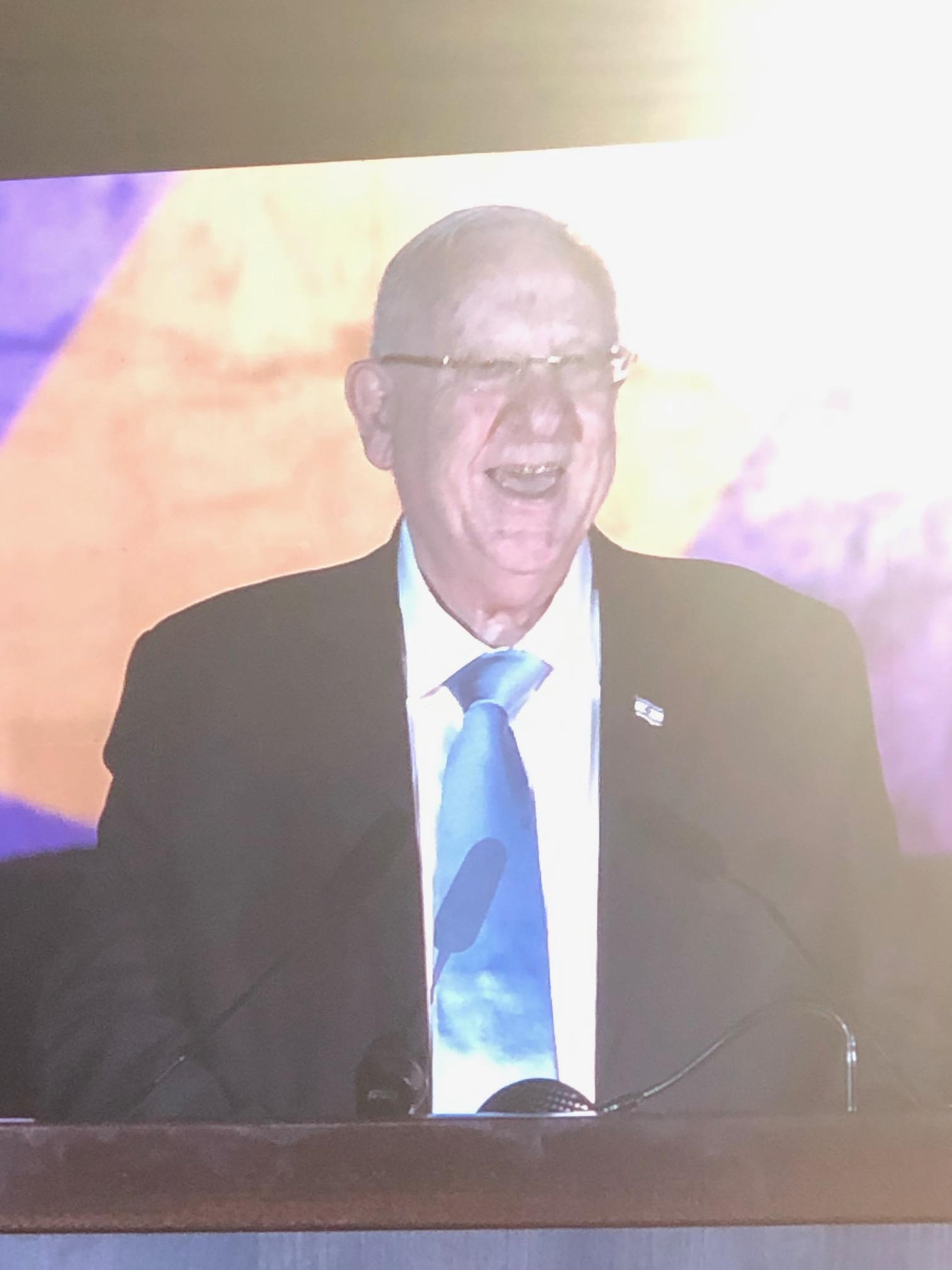 PM ‘Bibi’ Netanyahu – A forceful speech, from a man whose mandate to form a party ran out last week, who is facing years in court, let alone in jail – and who might still be the next PM… 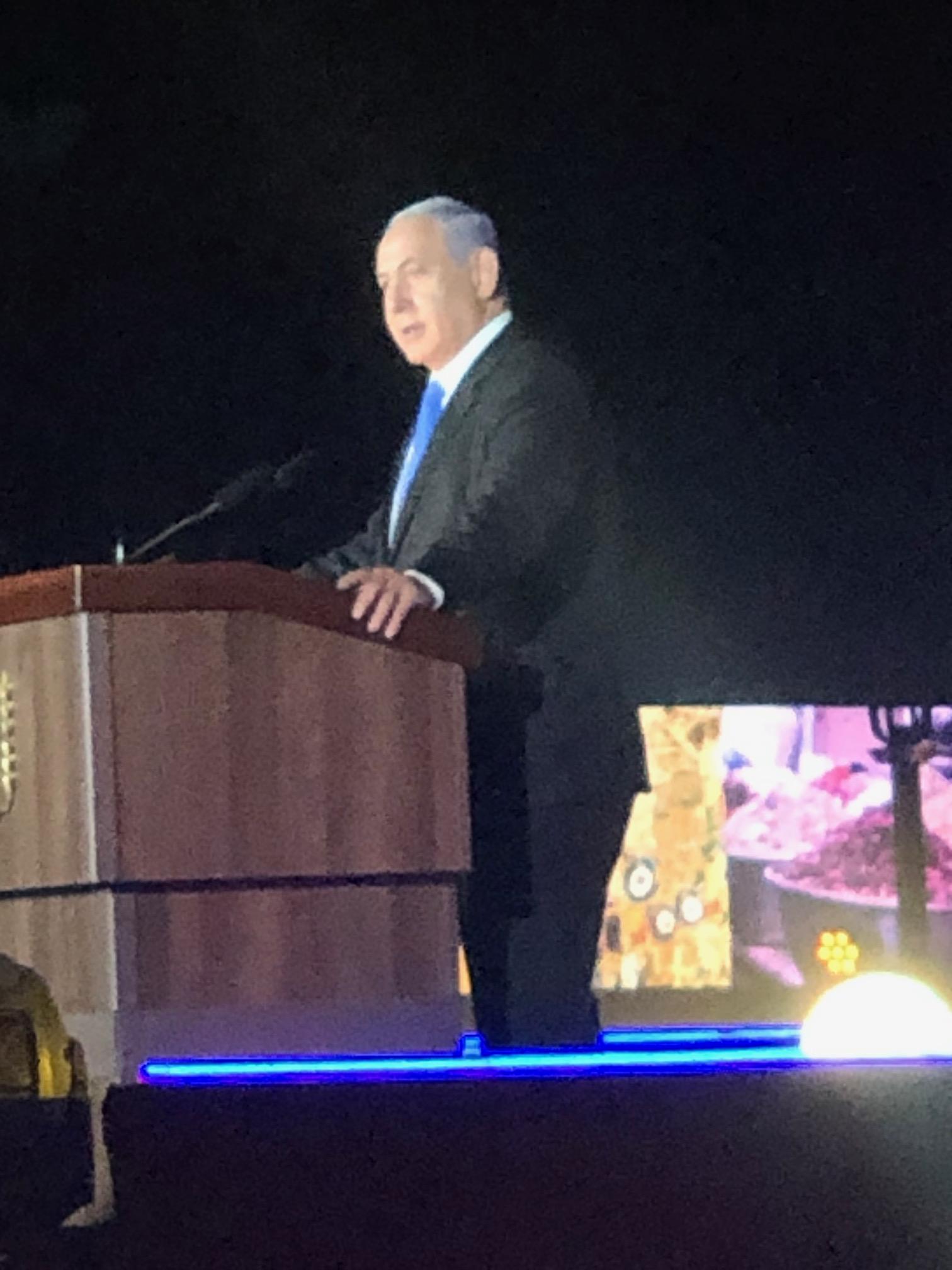 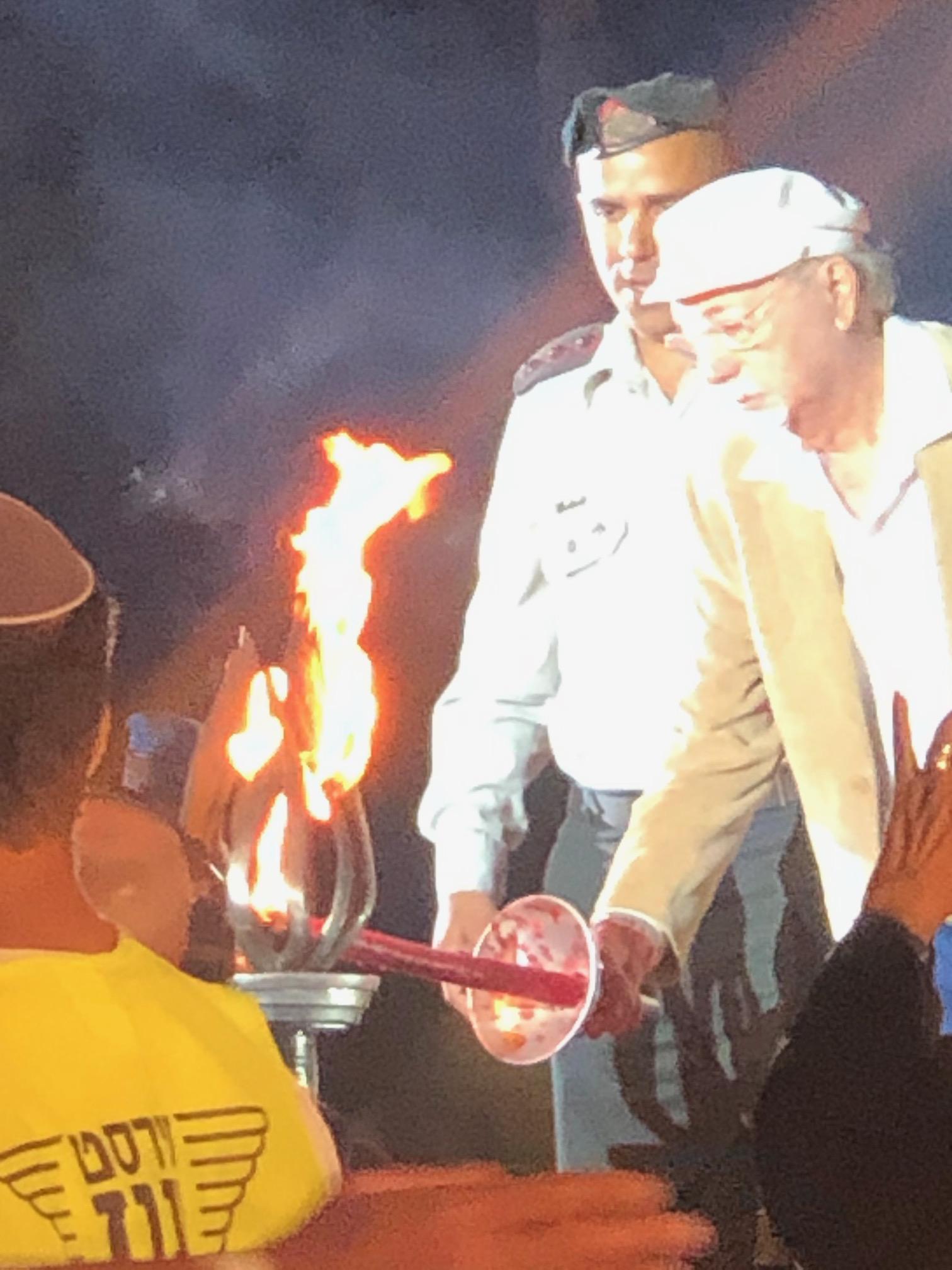 Ora, taking a pic. of Dani, one of their twin daughters, Dafna, and the Brigade Cmdr. 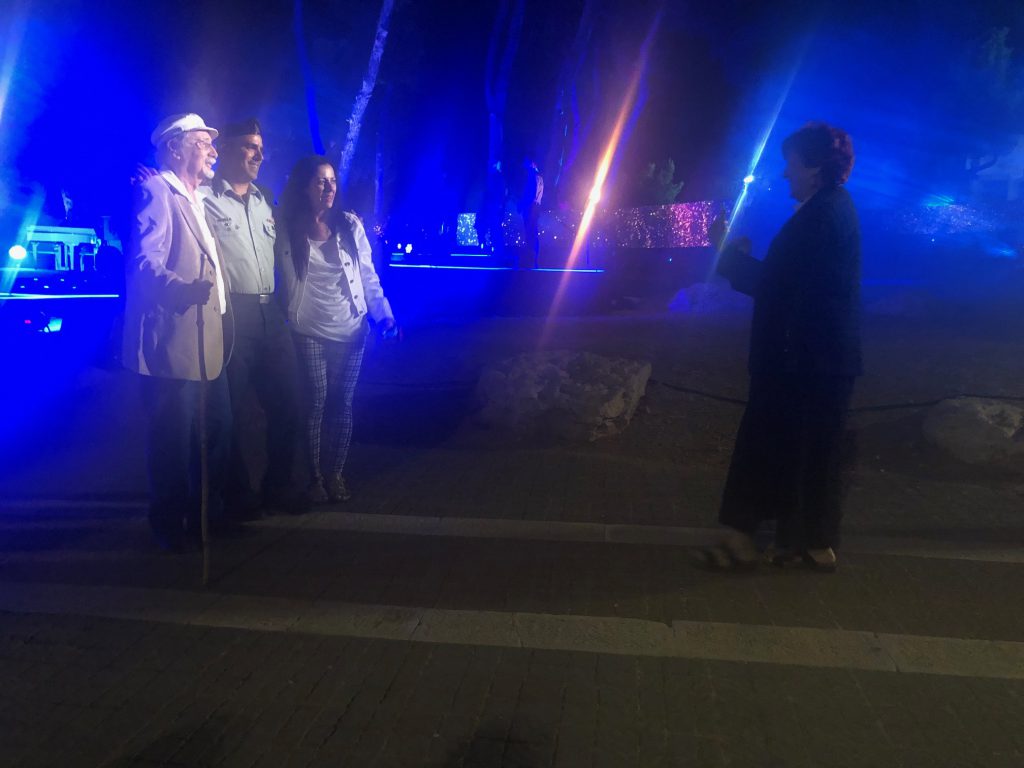 Dafna, with the 2 ’stars’ of the show, who ended the evening by singing ‘Ha Tikva’ (‘The Hope’), Israel’s National Anthem. The Ethiopian-Israeli girl also performed on the violin. 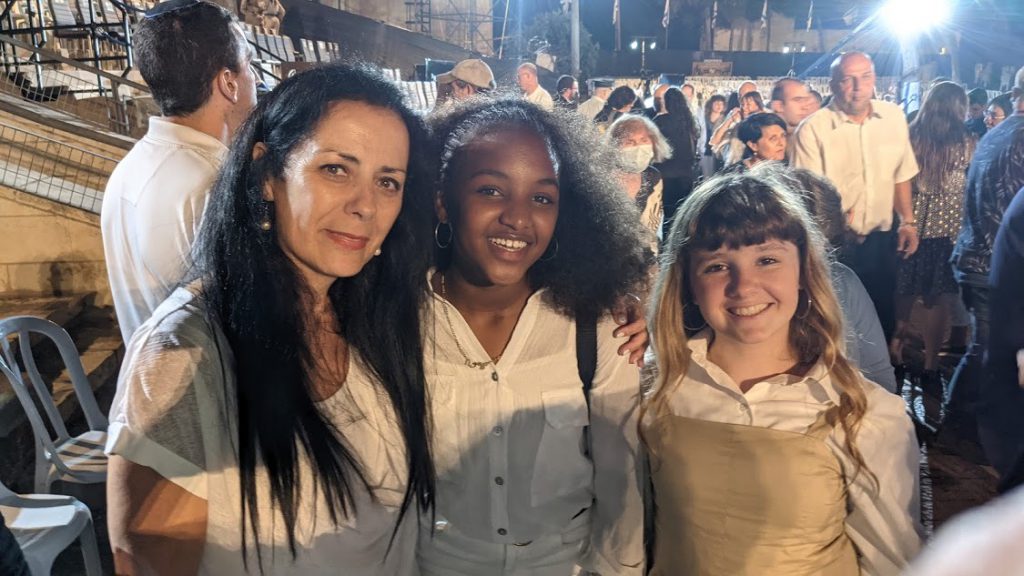 Digressing….a school friend of mine sent me 2 pages from the Parish magazine in which his baptism is announced. It’s from 1945. It featured an article: ‘Is it Peace in Palestine?’ It covers the Balfour Declaration of 1917, the reasons behind it (there’s always ‘a deal’ involved’), the opposition of not only the Arabs, whose borders had been played with following WW1, but also quite a few of the British politicians. The article is interesting, but has zero mention of Jerusalem, zero mention of Zionism and the hungered-for state of Israel, and zero mention of the Holocaust and the so-obvious need for a Jewish homeland.

Does anyone really understand and appreciate just how deep and insoluble this issue is?

Digressing….I just made the daily steps to the local newsagent (which of course sells almost ‘everything’), run by Morris, a warm, originally Irish, religious Jew.  He criticised Netanyahu’s speech yesterday. Certainly, while Pres. Rivlin focused more on perhaps naïve hopes for Jerusalem’s future, Bibi’s words, while sirens sounded, rockets were fired towards Jerusalem and Israel was planning deadly retaliation, were predictably aggressive.

However, Morris rightly complained that Bibi’s ‘red line’ was drawn because of the attack on Jerusalem. What about the million Israelis who live in the south, who have been running for the shelters for years? What makes Jerusalemites any more important than those cowering in fear for years?

So many years ago, I dared to suggest that Israel should do to the Arabs what the Arabs do to each other…How many times have I reminded people of how Assad’s father razed the Syrian city of Hama almost to the ground in 1982, killing many thousands of protesting members of the Muslim Brotherhood.. And where do you think the Munich terrorists got their name ‘Black September’? Dear democratic, British-educated King Hussein of Jordan ordered his troops in September, 1970, to quell the Palestinian uprising that was threatening his rule.

What were the short- and long-terms affects of these ‘actions’? Almost nothing! How many of us take notice of such events?

So, of course, my horrifying suggestion was to close Israel’s doors for a few days, stifle the international press for a few days (exactly like in so many countries I could name today) and ‘take care of our problem’. Trouble with that theory, of course, is exactly why Jerusalem is today such a maze. If we HAD solved our problem by killing thousands and exiling thousands more, the World WOULD have bombarded us with criticism, sanctions, boycotts etc.

Hey! That’s happening today (check the latest Human Rights Watch decorations about Apartheid). And we’ve hardly lifted a finger. In fact, I was thinking of running to our Arab Chief Justice (Apartheid?) for advice!!

It’s a slight coincidence that Uzi Dayan attended yesterday’s ceremony. Nice guy; ex-military and Knesset-member. We all have heroic memories of his uncle, Moshe Dayan. But few remember the big mistake he and his colleagues made following the liberation of Jerusalem.

Let me remind you of the 1948-1967 years: Egypt occupied Gaza (made no attempt to make it a home for their Palestinian brothers), and Jordan occupied the West Bank and East Jerusalem (ditto). During those 19 years, all synagogues in occupied Jerusalem were destroyed, and Jews were forbidden from visiting, from touching the Western (Wailing) Wall – the Kotel. So what does Dayan do? He agrees to give special status to the Arabs in East Jerusalem, and to hand over control of the Temple Mount (location of the Al Aqsa Mosque and Dome of the Rock) to Jordan!

The wonderful principle of give’n’take. One gives, the other takes. I have been to the Kotel and witnessed rocks being dropped from above (from the ‘holy’ Temple Mount, which is adjacent to the Kotel). Stones from where; Molotov cocktails from where? From inside a Mosque? This is the peaceful religion with which we must co-habitate?

Of course there are bad elements on both sides; that’s one definition of ‘extreme’.  But that’s too easy a statement. And that’s what makes Jerusalem a maze.

The solution has been lost. It has been cooked in the pot with anti-Semitism, with greed, with guilt and with hatred. I don’t believe it can be uncooked.

What would be nice is to have an armistice. A generation of real quiet, so that the seeds of decency are given a chance to grow, and the weeds of unfairness are extracted. Just look on the positive side for a minute. Look at what has been achieved in this still-young country, without the benefit of peace periods. Whether intentionally or not, Israel is in danger of being ‘destroyed’ by the constant unsettling criticism and the resulting nervousness, whether on Israel’s roads, in the Knesset – or in my Letters from Israel.