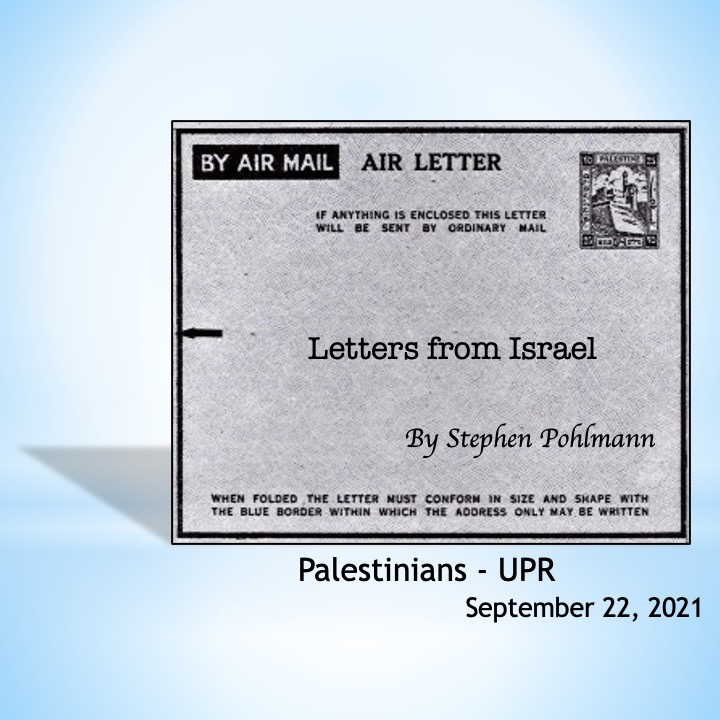 It may not have hit your local headlines, but there was a dramatic development last month at the UN. Security Council Resolution 2591 was passed on ‘The Situation In Middle East’. It included an addenda, awarding the Palestinian refugees special ‘Ultra-Priveleged Refugees’ status.

This was after 72 years of S (Special) status, following overwhelming pressure from a majority of the current members, who are… permanent: China, France, Russia, UK, US, and non-permanent: Estonia, India, Ireland, Kenya, Mexico, Niger, Norway, Saint Vincent and the Grenadines, Tunisia and Vietnam. (The actual voting pattern was not revealed).

(The Palestinians only received the original S-status after the other group of ‘Refugees from Palestine’, now known as Israelis or Jews, voluntarily gave up their refugee status in 1949, after most were settled in Israel and several wonderful western countries).

UNRWA, the UN department which is responsible for the now ultra-wellbeing of the Palestinians, declared a 3-day official holiday in Gaza and the refugee camps across the Middle East (including the West Bank).

The UNHCR, which officially is responsible for the rest of the refugees around the World, and Israel were among the few voices which vehemently opposed the resolution, citing the status of non-Palestinian refugees, unimportant as they appear to be. They referred to the 82.4 million who have been forced from their homes, and the 26.4 million who are ‘official refugees’. They mentioned another 49 million who are displaced internally in their countries.

The Palestinians who used to make up 65% of the Jordanian population – the ones who were put down by the monarchy during the Black September civil war in 1970 – have been protesting in the streets. The sudden influx of further refugees from Iraq, Syria and now Afghanistan has totally upended the geopolitical situation in their country. They are now reconsidering their position vis-à-vis the Palestinians in Palestine (which, in their eyes, comprises Gaza, the Occupied Territories and the current State of Israel).

The word ‘Chutzpah’ has been officially adopted as ‘Arabic’. This came to light during the recent saga of the prison break in Israel. Initially 6 Palestinian terrorists, each with blood on his hands, escaped Gilboa prison in Israel. It caused great embarrassment to the Prison Service authorities and to the security system in general. Despite the successful recapture of all 6, there are many questions to be answered. But the recapture exposed a few interesting factors. The upheaval and unrest in Palestinian towns and neighbourhoods after the escape was dramatic and, for the Israeli authorities, very worrying. The clear message was that the escapees’ brothers and sisters would give refuge to the 6, would protect them, and would riot if they were recaptured or hurt in any way. For a few days, there was tension throughout Israel.

But then, the first two were found, and then the 2nd two. They were found in bad condition, disheveled, hungry. They had not been able to escape across any of the borders with Gaza, West Bank or Jordan. The last 2 were then found in Jenin. Large numbers of Israeli security forces appeared in various parts of the town, distracting the people, confusing them, and, thankfully, avoiding violence. At the same time, a small team surrounded  the building where the 2 were hidden. It was the home of a friend, and they gave up quietly, not wishing harm to their friends.

What was interesting was first the obvious fact that the Secret Services had informers ‘everywhere’ in the territories. That’s very embarrassing for the Palestinians. The second factor was that the two did not hide in the Jenin refugee camp. “The what?”, you understandably may ask. Yes, there are several refugee camps in the West Bank (and in Gaza). Reminder that the West Bank and Gaza are the land the Palestinians have been fighting for. Even after having been given it as part of the 1947 UN Resolution to establish the two states, they still join their criminal neighbours (incl. Libya, Syria and Lebanon) in establishing refugee camps, in the ongoing promise of returning to all of the land between the Jordan river and the Med. sea.

The Jenin refugee camp is like the Wild West. Even the PA (Palestinian Authority) forces fear to enter. The Israelis knew that if the two had taken refuge there, it would have resulted in a deathly exchange of fire.

It is ironic that the 6 escapees came out of this smelling pretty good. First, they plotted for months to escape. In true  heroic fashion, they spooned and chiseled their way out. They were already heroes. Why then become martyrs? Thinking in a civilised manner, they avoided further killing and are back in Israeli prisons, where they continue to be better-treated than by some of their brothers in Palestine.

Who needs to spend money and time on refugees from the Taliban, from Assad, from the Jihadists in Northern Africa and the many other trouble-spots in the World.

Let’s just look after the Palestians – the Ultra-Privileged Refugees.

THE ABOVE ‘LETTER FROM ISRAEL’ CONTAINS SOME FALSITIES AND FACTS WHICH ARE COMPLETELY OPEN TO SCRUTINY.

HOWEVER, I HOPE YOU GET THE POINT.