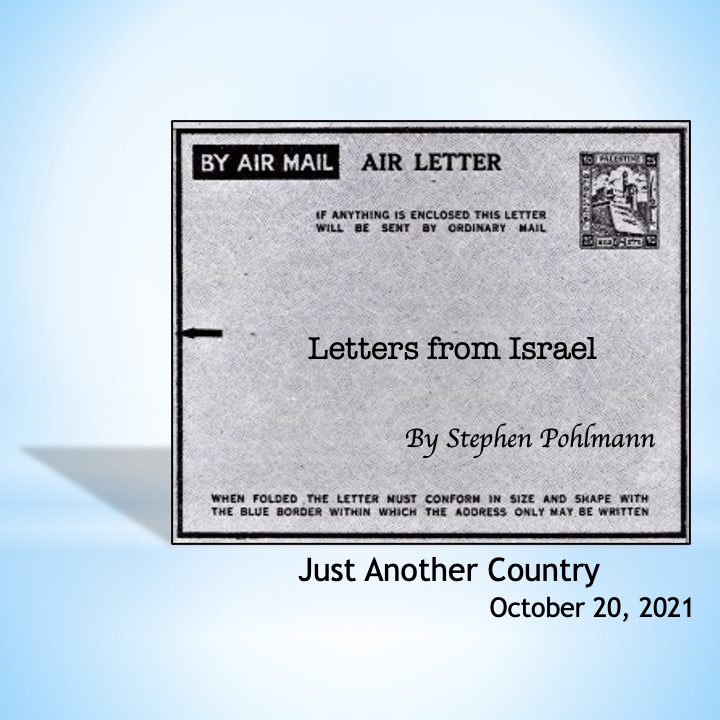 26 years ago, on November 4, 1995, Yitzhak Rabin, Prime Minister of Israel, was murdered by an Israeli citizen, a Jew. We remembered it 2 days ago, for this was the 12th day of Heshvan, 5782, the same sad day, but on the Jewish calendar. For most Israelis, this is the ‘I remember where I was’ day, like the Kennedy assassination for Americans,  the death of Diana for the British, and 9/11 for perhaps everyone.

Rabin was our neighbour, living 4 buildings down the road. I recall the Friday demos outside his home, right-wingers protesting at his moves to ‘give away Biblical Land of Israel’ to the Palestinians. Some of the posters held aloft were ugly; the chanting hurtful.

We neighbours may not have liked it, but we did nothing. Apathy.

Shimon Peres took over the premiership. He was also a neighbour. In fact, his building was not only next to ours, it is where we lived before moving here. He and Sonya in the 12th floor roof apt, we on the 8th. We even once considered buying the neighbouring apt. We liked the idea of a roof, and that’s what we now have.

After the tragedy, we and many neighbours joined those who gathered on Fridays outside Peres’ home, assuring him that what happened outside Rabin’s place would not be repeated. That’s where I got to meet and chat to Noa, Rabin’s granddaughter, who became known for her tearful speech at the funeral.

There was and is much to be said about Rabin. The Rabin Centre, just 1 km from here, tells us how his life and that of Israel went hand in hand. He wasn’t perfect. He smoked far too much, and played terrible tennis in our local ‘country club’. He certainly couldn’t sing, and wasn’t great at speeches. Yet, at the event at which he was killed, he did sing, and did tell us that peace has always got to be the end-product. This was a man with a strong military background, yet he understood that no success in battle meant anything if not followed by peace.

For this he died.

Yet, despite this, and so many other hiccups, this really is a fantastic country. How many do you know of, which annually hold a major national conference in a foreign tongue, attended by the PM, the President, former American Secretaries of State and the Treasury, multiple Israelis ministers, heads of some of the largest Jewish organisations, philanthropists, scientists, CEOs of leading companies, covering the fields of medicine, cyber security, military, intelligence, innovation…you name it. That was the Jerusalem Post’s Annual Conference, held last week in the capital.

Israel is one of those many ‘smaller’ countries with their own language (like Netherlands, Sweden, Czechia etc.) where foreign films are shown in their original language with subtitles, and where most ‘educated people’ speak English. In Israel, there is the added fact that the country, quite new, was partly built by Anglo-Saxons, and the Diaspora in the English-speaking countries remains a major factor in Israel’s very existence.

Moshe Lyon, Jerusalem’s mayor, made for me the obvious statement that Jerusalem is a city for all people, all nations, all religions. Only with Israel in control is this possible. Certainly NOT during Jordanian occupation times.

Pres. Herzog stressed the meaning of ‘Tolerance’, so bound up with democracy. ‘The need to engage with our fellow humans on a basis of respect’.

The Jerusalem mayor, and then Naftali Bennett, Israel’s PM, focused a lot on the current wave of building going on in Israel. Housing, transport, infrastructure. I can vouch for the fact that cranes are everywhere, roads are up everywhere, a new neighbourhood is being constructed at the entrance of the capital, and in Tel Aviv, we shall have a light rail and partial subway system in the near future. Unbelievable. (I can hear the night construction work outside our windows right now).

Bennett focused on Israel’s 3 politico-ideological forces: “nationalism to the Right, globalism/humanism to the Left, and Religion. He feels all 3 must co-exist; it must not be a tug of war between them. And it’s not necessarily about compromise; what is first needed is debate. (“In Israel, we say that it is impolite to let the other finish his sentence”).

Yossi Cohen, until 4 months ago, was the unnamed head of Mossad. He was asked about Iran, of course; the potential nuclear threat. In his opinion, they are nowhere near having nuclear weapon capability, and if/when they do reach that point, he is confident Israel will not wait for permission to ‘remove the threat’. About the Abraham Accords, the growing ties with our neighbours, he feels that these are the most important diplomatic steps in our history. Our Arab neighbours are coming out from their aggressive tribal ways, and are recognising the importance of Israel as a friend and partner in the new Middle East.

Ayelet Shaked is Israel’s Interior Minister, from the same ‘small’ party as PM Bennett. (Remember, Bennet is PM, despite having only 7 of 120 Knesset seats). She is at one with almost every contributor to the Conference, being in favour of the Abraham Accords. She sees the Palestinians being left behind in the dust.

The venue for the conference was the recently constructed Museum of Tolerance in Jerusalem, the chairman of the Museum, Larry Mizel, is also the head of the Simon Wiesenthal Center, which has become far more than just researchers looking for Nazis.

For Mizel, tolerance means dialogue – the best conversationalist is the listener. We must ALL learn to listen.

Sylvan Adams is a name that appears more and more often in Israel. He’s a successful Canadian businessman who moved to Israel and has become a self-appointed ‘Ambassador-at-Large’, promoting this country around the World. He is a fanatical cyclist. He brought 2 stages of the Giro d’Italia to Israel, and sponsors the first-ever Israeli top-standard cycling team, The Start-Up Nation.

Apart from financing the largest velodrome in the Middle East (just 3 km from here), he is sponsoring the new Emergency unit at Tel Aviv’s Sourasky Med. Centre. And at the conference, he told of his involvement, together with Israid, in bringing out not only the Afghan women’s cycling team from the recent crisis there, but a total of 165 ‘people’ who were in imminent danger.

Ronald Lauder spoke – He’s part of the Estée Lauder empire, he’s Pres. of the World Jewish Congress (and Pres. of this conference), a philanthropist and a great art collector. Remember, he’s the one who at the time paid a world record $140 milion for a Klimt painting (that film “Woman in Gold’) and now displays it at his lovely ‘Neue Galerie’ opposite New York’s Metropolitan Museum. (The café in there serves great cakes..).

Lauder’s talk focused mainly on the fact that Israel is losing the political battle, primarily due to anti-Semitism. (That’s a touchy subject in my opinion. I’m not sure how much of the non-Jewish world understands what anti-Semitism is, and actually doesn’t really care. It’s our problem). He’s very concerned about the relationship between the Jewish Diaspora and the State of Israel, and that again is a touchy subject. Many in the Diaspora just want to ‘get on with their lives’, and don’t think it’s so important what they think; how they live.

And finally, he says that the Israeli-Palestinian problem needs to be solved in order to reach peace in the Middle East. As I’ve said/written many times, I totally disagree with him. If we ever solve the I-P problem, it’ll only prove that this is NOT the problem in the M.E. There are countless other conflicts in the region, not the least of which is the Sunni/Shiite split, the Iran and friends against the rest, the tribal mentalities vs. what-I-call the ‘nouveau riche’, primarily in the Gulf. (For the first time, I’m comparing the I=P problem to the pandemic. I’m not sure either will ‘go away’, and that we shall have to get used to living with the problem).

Then came so many speakers from the digital world. Cyber security, medical innovations, AI and so on. That world is non-ending. For me it’s fascinating that Israel has ‘been forced’ to become one of the World’s leading suppliers of military equipment and intelligence. I had an argument once with a Palestinian who accused our army of whatever . “But that’s your fault”, I stated. We had no army when we came here. We haven’t had a weapon in our hands since the days of the Maccabees in Roman times. We were known for many things, but not aggression.

The pioneers came here with spades and shovels, with brains, with sweat, with desperation, and with dreams. The stories of how the early pioneers survived in this hostile environment are well-known. The survival of the Jews in the War of Independence, faced with the armies from 5 Arab neighbours is considered a ‘Naqba’ by the Arabs (a catastrophe), and a miracle by Israelis. We had no real army; our forces were made up of various youth militias, armed with whatever they could get their hands on. (There are many stories of how Golda Meir went from country to country, begging for another plane, tank or gun).

“You built our army with your continued aggression”, I continued. “And now you complain??” As is often said, if the Arabs stop their aggression, there’d be peace. If Israel puts down it’s arms, there’d be no more Israel.

You still don’t think this is a fantastic country? Like every country, so much to complain about, so much to criticise. But how many countries can equal what Israel has achieved?

This was a great conference.