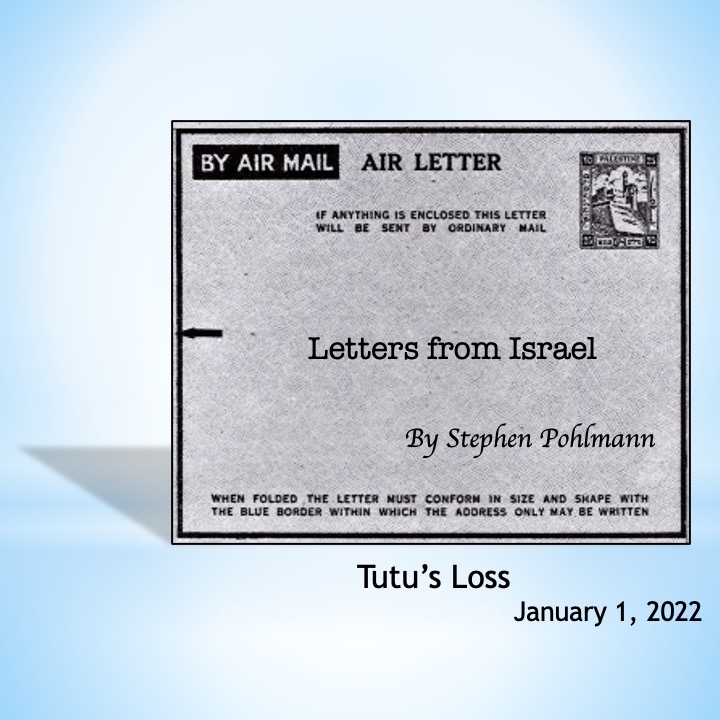 Bishop Desmond Tutu recently died. Today, perhaps now, is his funeral. A very special man in a modest coffin. He was, unquestionably, a great figure, winning, together with Nelson Mandela, the Nobel Peace Prize. His efforts on behalf of the South African blacks against Apartheid are now legendary. And the fact that he did not always agree with Mandela was a sign of his well-publicised individuality.

His ‘loss’ was that he did not see the new film by Avi Nesher, ‘Image of Victory’. It would have helped him right his well-known wrong concerning the Israel-Palestinian conflict.

Tutu was always a strong supporter of the Palestinians; identifying their struggle with his own people’s. He therefore automatically compared Israel with White South Africa – or at least the Afrikaaner government. He persistently criticised Israel, although I always had the nagging feeling that he was neither anti-Semitic nor even anti-Israel. In fact, it was Mandela who stated that there can be no peace for the South Africans until there was peace for the Palestinians. This has been proven very wrong; the situation in the Middle East has approximately zero influence in South African affairs.

(I am reminded of John Kerry’s last speech before his tenure as Obama’s Sec. of State ended. He also said that there can be no peace in the Middle East without first solving the Israel-Palestine issue. Well, recent events have proven him totally wrong, too).

So what has the film to do with this? It is based on the true story of Egypt’s King Farouk’s wish to witness the destruction of the new Jewish nation personally. He ordered a journalist and a cameraman to film the Egyptian army’s advance into Israel. In their path was the kibbutz Nitzanim, manned by not more than a mixed group of youngsters. Some of them, new pioneering immigrants. Some were offspring of earlier pioneers. Some were survivors from the Holocaust.

This was 1948, only 3 years after the liberation of the camps. Can you imagine living through the concentration camp experience, living through the immediate post-war trauma, the dangerous voyage to Palestine, obstructed by those very forces that liberated the camps? Now many of the Jews were again being put in camps in Cyprus, or, even after landing in Palestine, were held in camps for a time ny the British. And what was their destiny? To be sent to a kibbutz, strategically-located along borders to ‘disrupt’ the advance of the armies that all Israelis knew would come. Israel’s Alamo’s.

Tutu only saw one side, as is still the case with much of the World community. ‘Those Jews are the clever ones; they always have been. Let’s support the poor underdogs, the Palestinians’. Israel did receive some sympathy when it was clearly the underdog. The 6-Day War and Entebbe were widely ‘admired’ – even supported. But, like David’s victory over Goliath, a new underdog appeared, and the Palestinians have never looked back. The approx 700,000 refugees are now 5 million, and rising. And still they are blindly supported. Tutu must have wondered what went right for them, and so wrong for the blacks? Maybe it was a mistake to identify the 2 peoples with each other.

And to summarise the complexity of all this, Israel’s Defense Minister, Benny Gatnz, recently welcomed Mahmoud Abbas, the Palestinian Authority (PA) President to his home in Israel for talks.

Abbas rarely steps foot in Israel, yet here he was: Holocaust denier, hater of Israel, financier of terrorists and their families, etc.

Chance of success? Possible peace with the Palestinians – or at least those outside Gaza? 100:1. Right-wingers in Israel screamed. Hamas in Gaza screamed. Not sure where Tutu would have stood.

But this is the world we are in. We must keep alive hopes of a solution, even though there is none in sight.

And what of Mansour Abbas, leader of the small United Arab List party? A reminder that, in the last election, they split from the Arab Joint List, declared empathy with the Jewish people and, much to the chagrin of so many, joined the governing coalition. Popular or not, he succeeded in winning a budget that goes far towards helping the Arab Israeli population. Like Che Guevara, the man is a qualified dentist. He therefore knows the pain of treatment.  He recently declared recognition of the ‘Jewish State of Israel’ – and he is still alive. There is hope….