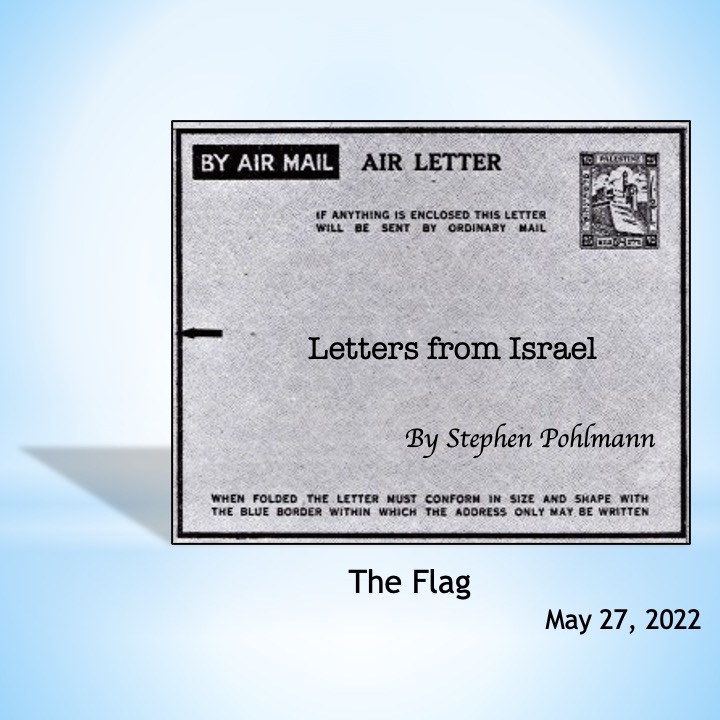 I was never a great fan of national flags, nor anthems, nor borders – and I can assure you, I experienced many. But they are what they are, and, for many, they are important.

For 2,000 years, the Jews dreamt of a return to Jerusalem. It can easily be argued that no people more deserved a return to their home than the Jews – historically. The Holocaust was the ultimate reminder, but the dream existed almost 2,000 years before Mr. Schicklgruber was born.

In 1947, the guilt-ridden World finally granted the Jews their wish. The Arab nations disagreed. 5 of them, as yet unaware of the word ‘democracy’, in any of its many forms, tried to destroy the fledgling nation – including Jordan, the very country originally designated to be the land for the Palestinians – and still consisting a majority of Palestinians even today.

The war ended in a stalemate. The Jews had a land, but without Jerusalem, Judaia, Samaria, Gaza and the Golan Heights, the first 2 being occupied by guess who? Yes, Jordan. Did they hand over control to their Palestinian brothers? No. They occupied the city and what some call the West Bank. Did they introduce religious freedom? No. In fact, they destroyed most of the synagogues and banned the Jews from the Western Wall, the Wailing Wall. the Kotel. And the Temple itself, well you know that story.

Despite the official Musllim law that forbids building upon a holy site (look up the battle with the Sikhs over Amritsar in India – ‘thousands died’), the Muslims decided to construct their mosque on the very spot where the 2nd Temple stood. They say that was the spot from which Mohammad arose to Heaven upon his white horse. Well, I cannot imagine that the architects actually had physical proof of the spot. The horse didn’t leave anything behind, did he? I mean, it could have been 5 km. down the road.

So when, in June 1967, Israel regained control over all the above occupied areas, when Gen. Motta Gur uttered the words ‘The Temple Mount is in our hands’, the first of many flags were raised. We had been waiting 2,000 years.

What should then have been done? Of course, razing the mosques to the ground and constructing the 3rd Temple. Who could deny the Jews that?

Well, guess what? The Jews denied it to the Jews. We decided not only to share the site, but to give control of the Muslim site to the Wakf – and to Jordan. At the time, a beautiful gesture of hands of peace. In hindsight, as the Arabs like to call the loss of the War of Independence in 1948, a catastrophe.

For those of you who know the Kotel, you will only see tourists and those in prayer, plus a few activists on behalf of women, who feel they should have the same rights as the men in that area. (I agree). But on the Temple Mount, the location of the Dome of the Rock and the Al Aqsa mosques, Molotov cocktails are prepared and stored, plus mounds of rocks. And, when they feel like it, they drop them on the Jews praying at the Wall.

Aviva says I’m being extreme and right-wing. Am I? I don’t see that. I think I’m just being logical. First, we would have been righting a terrible wrong. Second, in 1967, there would hardly have been a wimp out of the Arabs. Their armies had just been destroyed. Third, the World would hardly have complained. I remember being in the NY area during the 6-Day War, mainly visiting dental laboratories. The technicians were glued to the radios and were cheering Israel’s every move.

And we would have avoided the 55 deadly years of terror and misery that we have experienced. We would have avoided World criticism, including the 2 emails I received last week from you readers, complaining that our police are naughty and our PR dept. is not working.

When Palestinians march in OUR capital city and raise not only their flag, but also the flag of the terrorist organisation, Hamas, then we have a right to tear them down.

And on Sunday, I shall wear a smile when I see the happiness on the faces of the people in Jerusalem, celebrating the liberation of their city. And if Hamas leaders, from their bunkers, inspire some Palestinians to ‘protest’, then I 100% back the police and army to do their job.