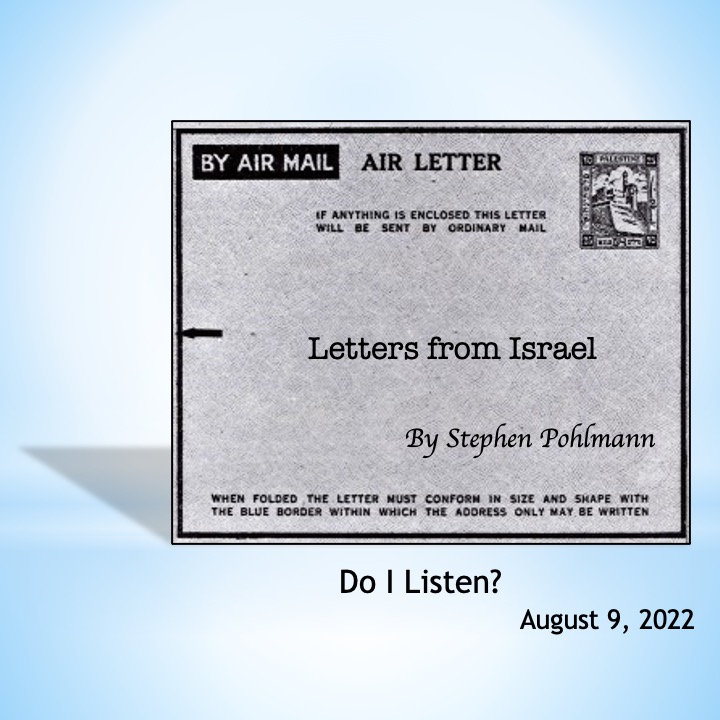 I believe I am also a listener. And I know I’m not always right.

My ‘Letters’ came under a little criticism lately. Again the question as to why I write them, now numbered over 400. What am I trying to achieve?

Are the letters making a difference? Yes, I think so. Although I have no way of knowing how many are actually read, I receive enough responses to keep me going. I get support, some comments, and the occasional rebuke. In fact, there have been some battles – and the rare but actual ‘separation of ways’.

The accusation of my being too far on the right’ has faded away. It seems generally accepted that I am centrist, but with a clear ‘swing’ on both sides.

Know that I am aware that while writing this, there is again ‘war’ in Gaza. By not writing much about this in no way means that I do not care. But, in my almost 50 years of ‘contact’ with Israel, the conflict with the neighbours has been an almost unchangeable constant. Aviva and I were dating during the Yom Kippur war in ’73. She and I have witnessed various levels of war ‘all the time’ – and that includes personal, first-hand experiences.

– Just before we met, Aviva handed her boss at the Israeli embassy in London, Ami Sachori, a letter bomb. It killed him. It was 1 of 51 sent by Palestinian terrorists from Amsterdam to Israeli embassies. 8 were sent to London. The other 7 were detected. Ami was the only casualty. Our daughter is named after his daughter, Eliana.

– I’ve been questioned by Yorkshire police about a possible bomb in my car.

– A package ‘dropped’ by us in Jerusalem’s Old City caused a bomb scare.

– And so on…the Palestinian ‘issue’ is part of our lives.

But, we are moving on.

Let me repeat: I don’t recall a single visitor not being surprised about what they see and experience when they come here. It is never what they expected – and this is perhaps the crux of the issue. If they were to visit the West Bank, they’d see some changes: expansion on both sides, a new Palestinian city (Rawabi), more learning facilities on both sides, industrial parks etc. In Gaza, they’d see little change. The people are suffering horribly.

Do you see what I’m getting at? In 1947, the establishment of 2 states was declared. The Israelis went ahead and established their state. The Palestinians, with the support of their Arab neighbours, not only did not agree to the Jewish state, they decided NOT to establish their separate Palestinian state. No state if not everything. Since then, including the 50 years I’ve been watching’, an incredible country has been established. It can be argued that the Palestinians had far more support – in every way – for a state, yet managed to continue to live in pre-1948 squalor.

Gershon Baskin is an Anglo-Israeli peace activist. He has been involved in most peace attempts, and is always there when needed as a negotiator with the Palestinians. He regularly writes in the Jerusalem Post. His article on Thursday was entitled: “No hope”, and he repeats the tragedy of the Palestinian people. But he groups them all together. He likes to avoid mention of the fact that many Israeli Palestinians are very happy where they are – citizens of Israel. They are like any other minority in any other ‘Western’ society: equal members of the community.

The big difference is that they have connection to the many Palestinians still unsettled in Gaza and the West Bank or being kept as permanent refugees by their Arab neighbours. The extremists make sure that the problem is ongoing (Oh no, Hamas is moderate … It’s now the Palestinian Islamic Jihad – PIJ – who are the terrorists).

Southern Israel is running to the shelters. Sirens have sounded in S. Tel Aviv; we are N. Tel Aviv. We have the news on – but we are watching a Netflix series.