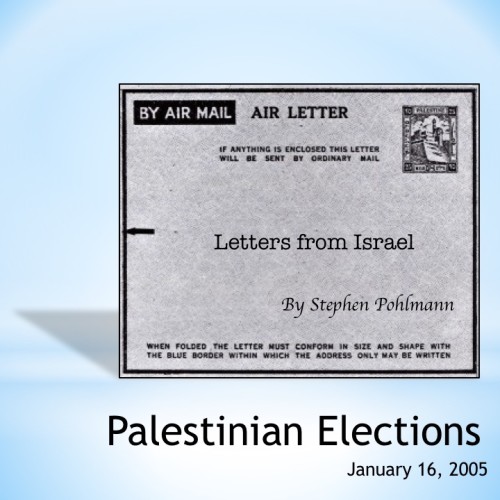 One of BBC’s correspondents recently reported from today’s Afghanistan, a country struggling to get back on its feet. (By the way, why does today’s society expect problem countries to change overnight? One thing we have learnt from history is that it just does not work like that). He said that one of the most stunning discoveries he had made was that people had difficulty being happy – or at least showing it – because…”the Taliban had banned laughter”.

I’m not sure what this has to do with my thoughts, but it certainly struck me that we human beings, the Palestinians being a bright example thereof, are sometimes so stupid in not seeing the natural and logical way of living, and of moving forward.

Why is it, that even during the Tsunami crisis, they still insisted on lobbing Kassam rockets from Gaza into Israel? Suicide attacks, also killing Israeli Arabs, Beduins.

Then they complain about the predictable retaliation. Isn’t the picture clear to them? A reminder to ask their Arab cousins in Israel just what it’s like to be living not only among ‘the infidels’, but  as an integral part of the community.

Why is it that the Arab nations hesitated in sending help to the stricken countries, including one which has the largest Moslem population in the World, and which suffered the greatest? And when they DID react, they sent measly amounts (compared to what just the Saudis donated to the families of Palestinian suicide bombers last year – $176 million, according to CNN).

Israel was among the first to send teams of rescuers – they are experts… – and they were barred from entering certain areas on purely political grounds. The goods they brought with them were allowed through.

Now the Palestinians have a new President. So many observers are holding their breaths. Abu Mazen has publicly come out against violence against Israel – as Arafat did on many occasions. Mazen appears to be a little more sincere. But he is not an experienced politician – and has enormous obstacles to overcome.

He says he is going to Gaza next week, and will not leave until…But just last week he was hugging the leader of the Islamic Jihad gang.