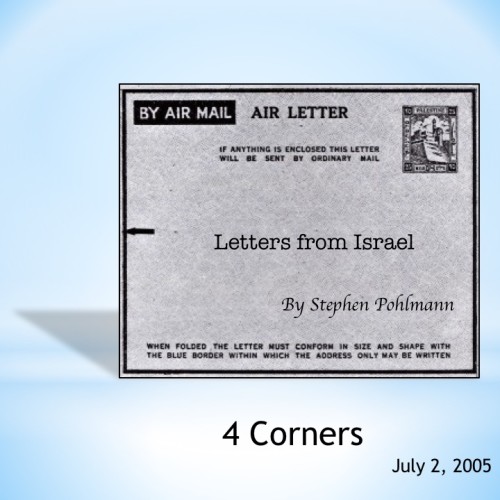 Went for my usual walk/jog in the fields north of our residential area. 3 helicopters arrived, concentrating on an area near the Ayalon highway, the main north-south route through the city. Obviously something holding up the traffic. As I approached, I was hoping it was not yet another of the road accidents crippling this country. No, it was another of the protests crippling this country.

We have many religious groups in this country. This protest was organised by the right-wing settler group, strong in what is known as the occupied territories. These were all kids – between perhaps 14-20 – with a few bearded leaders among them. They were blocking one direction of the highway, and the police were pulling, shoving and carrying them away. This particular one was peaceful, with much friendly chit-chat between the sides. But it’s all building up.

State of Israel or Land of Israel.

Thursday was Gay Pride Day in Jerusalem, a celebration that had, perhaps understandably, met with much opposition in this city of religion. Just 60 km. down the road, here in Tel Aviv, there is a large festival/carnival organised by the gay communities. Why antagonise the citizens of an already torn-city? 3 revellers were lightly wounded by a ‘haredi’ (religious) man, brandishing a knife. What is this world coming to?

It is interesting that, in my opinion, Sharon is playing a very clever game. First of all, a reminder that he was among the leaders who led the move to settle in the territories. The military strategist side of him realised that it was illogical to protect 8,000 Jews in a small area of 1 million Arabs while the latter were militantly opposed. It was that simple. There was no one to talk to on the other side, so he made a simple unilateral decision. As usual, the Palestinian extremists will see this as Israeli weakness. That has always been part of their downfall. Such moves, like the evacuation from Sinai and from Lebanon, have been wrongly and badly interpreted before, and will only lead to more conflict.

Sharon’s reasoning has been quite simple: Get out; create a clearly defined border, so that future attacks, whether by suicide killers or Assam rockets, can be handled with the tactics General Sharon understands. No danger of hurting Israelis on the other side of the border – nor the high financial and human cost of protecting them.

Sharon is as right wing as he ever was – in my opinion. It is a joke that he is having such battles with the ‘further right-wing’ elements in his own party. Look at his attitude towards the West Bank. Most of the Jewish population there is there to stay. Fait accompli. It’s one thing to move 2,000 from Sinai and 8,000 from Gaza. No way are 250,000 going to be moved from the West Bank. Geographically, we may be prepared to give back quite a high percentage – not far off that which Barak offered Arafat. But now the negotiations stop.

Is this the militant right-wing Stephen talking? Of course not. I’m as left-wing as I ever was, but the practical and realistic side of me also remains strong. There have been some terrible mistakes made, and so many opportunities lost. But you cannot keep looking backwards.

In my opinion…first opportunity lost was by the Arabs in this area, who refused to trust the new neighbours, who did not come here with guns. (And a reminder that the Jewish immigrants were joining many others who had been living here for centuries – including my wife, Aviva’s family).

A terrible mistake was made by the Allies, especially UK & France, in the way they divided the Middle East into countries with borders impossible to respect – from so many points of view, especially strategically.

For whatever reason, the UN voted to divide the land into 3 (Jordan was part of the project). The silly thing is that, today, the Jews would scream at the unfair borders. But that is hypothetical. In 1947, they were desperate; they would accept anything. And they did. It was the neighbours that did not accept this new land in their midst. It is no good complaining about ignored UN resolutions, when the very first on the subject is being officially opposed by the Arab neighbours, even today. I use the word ‘official’ carefully, as it is today’s social preachings about which Israel is concerned.

The Arabs missed an enormous opportunity in1948. It was a reminder of the lack of co-operation between the Arabs themselves. It was Jordan that occupied the West Bank and Egypt were in Gaza. Such a great opportunity to give the Palestinians their home. Israel would undoubtedly have been happy to negotiate the 1 or 2% border adjustments that were necessary.

That situation continued for 19 years, until the Arab armies gathered together again for another war. Why a war? What was Israel occupying? (The Palestinians themselves appeared to be ignoring the chance of getting their lands back from their Arab neighbours. The PLO was established in 1964).

Next mistake. Israel’s. In 1967, with enormous expanses of Arab lands in their hands, Israel missed the chance – in my opinion – to give everything back. Yes, they did offer to do so. But the Arab League summit (in Khartoum, I believe) refused to accept ‘such generosity’ – there is a lot of pride in Arab culture. This was land to be won back. Israel’s big mistake, and missed opportunity, was not to do – in my opinion – exactly what Sharon is doing now. The Arabs don’t agree to take the lands back? That’s their problem. If we stay in these lands, we become the occupiers (in the eyes of the majority of this World, who do NOT accept that these lands are part of the Land of Israel), and bring upon our heads all that comes with this.

I do not believe nor accept that Israel ever wanted to be occupiers. Their reasons for settling in the territories may have been politically wrong, but….many wanted to live in the Land of Israel. Others felt that the settlements were strategically necessary. And some just wanted to settle in a new area, financially supported by the government, to farm and produce. They naively believed that the local communities would learn to live with this; would mix.

But that was a big mistake. In hindsight, most obvious.

No matter how much Israel itself is living proof that Arabs and Jews CAN live together, the neighbouring countries are not ready for this social change. Until then, clear borders need to be established.

There is conflict in the Jewish community. And it really does seem to come down to the question of whether the State and Land of Israel can live together. Jews have a new identity: Israeli. Although it was religion that ‘created’ Israel, it is the secular/religious divide that is being tested. ‘What is a Jew?’ is often asked. I won’t go into the many answers….

Only when the State of Israel has peace, can the Land of Israel hope to survive.

So, you want a solution to the Palestinian/Israeli problem? There’s a new plan just next to the table. From an Israeli geographer. Ben Arie, I believe is his name. (If only this idea were not from an Israeli…).

Perhaps then, the Land and the State of Israel can start living together.