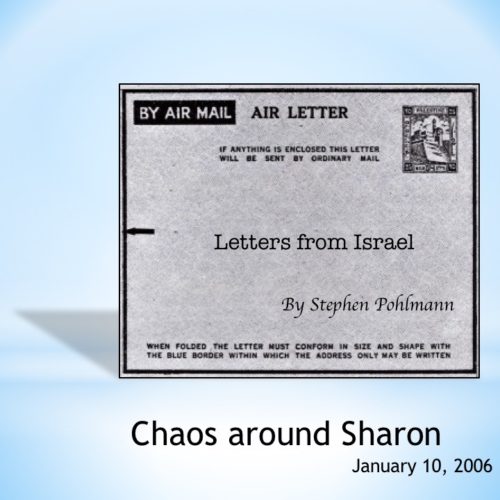 They are carefully trying to bring back Sharon to consciousness. If he is aware of what’s going on around him (and that’s a wide area) – and who knows what he knows – I would not be so sure that he would want them to succeed.

I listened over the weekend to BBC’s Have Your Say. The subject was What Impact Will Sharon Crisis Have?

A friend of mine is a Professor of Middle East Politics. He has sadly observed that often, when he makes some statement, based as much as possible on an unbiased academic point of view, he is accused by both sides of being biased! That shows how far apart the sides are.

It was therefore no surprise to hear the differing views on the BBC.

Being me, I started taking notes –

Sharon was criticised for being an Israeli version of Patten. But wars are won by the Pattens of this world (and movies are made, basically praising them). And this IS a war.

Yes, Sharon’s involvement in Lebanon was a black mark on his career. But the reasons for going in were clear – the continuous bombardment of northern Israel from Lebanon. They just did not seem to have a long-term plan.

Chatilla & Sabra – a horrible event. And yes, as the Dutch UN forces in Srebenicke, the UN in Rwanda and so many other armies who have not got a clue as to how to keep the local madmen apart, Sharon was guilty of indecision. And, again like in the other cases, many of those who were directly involved in the massacre are today at liberty – some even in the Lebanon government.

‘Sharon was not a man with whom the Palestinians could talk’ – Well who was? They had had everyone, from Barak to Peres to Rabin, Netanyahu, Shamir, Begin. Slowly, we should be getting the idea. And Sharon did talk to Abbas.

By exiting Gaza, ‘Sharon had no intention of further negotiation’ – I don’t disagree. Instead of using 2 soldiers to defend each settler in Gaza, let’s create a strategic border and let the Palestinians sort things out themselves. As I have mentioned before, a moderate Palestinian said at the time that ‘we now have a chance to prove that we deserve a nation’. Had some form of peace ensued inside Gaza, then Israel would have been forced, both by the international community and their own voters, to take similar steps in the West Bank (where 90% of settlers live in 10% of the land). But instead, there is anarchy.

‘Why doesn’t Israel……?’ Surely no one, except extreme pacifists, can blame a country (any country) for ensuring it’s security. Trouble is, as here, it creates a vicious circle.

Occupation is such a misused word. Why doesn’t one Palestinian say that the Israelis are welcome to stay as long as there is peace? Just as the 1.2 million Arabs are officially welcome in Israel – as Israelis! Yes, there is criticism that they do not have fair representation in society – in running the country etc. So there are only 9 Arab MPs here. Let that sink in. What is the number of Mexican politicians in US, Turkish in German, Pakistani in UK, Arabs in France, Aborigine in Australia? And which countries in the World insist on a total ban on one people? Why doesn’t the international community wake up?

Jenin was brought up again. No matter what the official reports say (forget about my discussions with 2 of the soldiers directly involved), some will continue to believe that there was a horrible massacre. Same category as Holocaust deniers.

A Christian/Jewish alliance against the Moslems was mentioned. Simple paranoia. If anything, the fears are that it is the other way round! (Israeli democracy was again illustrated. Yesterday’s editorial in the Jerusalem Post, a traditionally rightist paper, focused on the Haj. It reminded it’s readers that there are 1.3 billion Moslems in the World, the majority of whom are moderate, many of whom are far more interested in their own lives than putting down Israel.

We were asked to respect the millions who, at least once in their lives, make their difficult way to Mecca and go through hazardous rituals in an attempt to clean their souls and make their peace with Allah, without a political thought. I’d like to see such an article in Al Ahram about, say Passover.

‘Israel voted for Sharon’ – Well, it is now common knowledge that Arafat’s rejection of the Israeli Left pushed voters to the Right. If appeasement does not work, voters worldwide will tend towards stronger security. Arafat voted for Sharon.

‘Israeli aggression’ – Too easy a phrase to throw out. We’re back to the vicious circle bit. There is no question that, to put it diplomatically, both sides are retaliating. But if you look at Israeli politics, throughout it’s history, you will see that it’s policies have been reactionary or responsive. Sharon’s walk on the Temple Mount (not only site of the Al Aqsa Mosque, but also of the Jewish Temple) was in reaction to Arafat’s rejection of Barak’s apparently over-generous offers of land for peace. It is true that he knew what the outcome would be – because the Intifada was an accident waiting to happen.

Iran was mentioned. Like the Jews of Germany in the 30s – and the Allies – I cannot now imagine that Iran would drop a nuclear bomb on Israel. But have we really thought about the true hatred that many of Israel’s enemies have of Israel? Do we realise how basic are these people’s lives, how simple are some of their major decisions? We are being naïve at ignoring the dangers of putting WMD’s in the hands of haters. This is one of the very sad reasons an Israeli leader needs either to have been a major military figure (Sharon, Rabin, Barak) or at least have them close at hand (as Olmert will have Dichter, Mofaz and at least 2 others).

[Do you know that it was Barak who was in charge of the Entebbe raid – and that it was Netanyahu’s brother who was the famous ‘Yonni’ who died in the raid.]

‘Netanyahu would return the settlers to Gaza if he wins the March 28 election’. No way! It’s that simple.

Back to ‘Sharon refuses to negotiate’. Not true. As soon as Abbas succeeded Arafat, he did try, but then gave up. Hence unilateralism. It has taken 3 generations of catastrophe to ‘confuse’ Palestinian society and create the many factions. It is too easy to blame Israel for that. (Do I have to go back to the Arab’s rejection of the State of Israel on the day independence was declared – in defiance of the UN, the organisation that issued the very resolutions to which the Palestinians so often refer).

Palestinian elections, planned for Jan 25th. It is a fact that, whatever happens in Israel, both now and at the March 28th elections, there will be little basic change. Much is predictable. What is not clear is how the Palestinians will vote and what will happen afterwards. There are 2 main Palestinian groupings, with many smaller factions, some of whom may prove important either because a coalition with smaller parties may be necessary, or because they will continue terrorism/militancy.

Hamas, the party of the Islamic fundamentalists, is gaining popularity, yet it still grips the gun. The PA’s Fatah, secular, is split down the middle, between the old guard (ineffectual) and the new (militant). And that latter’s leader, Marwan Barghouti, languishes in an Israeli prison with 5 life sentences on his head. There are many who want/expect Israel to release him. Would you? He initially threatened to separate from the ‘old guard’. But that would hand the power to Hamas, something neither want.

Elections – Unfortunately, it is feared that, prior to both elections, there will be a rise in the rockets being fired from Gaza and Lebanon into Israel, in order to disrupt – raise the ante.

Will the Palestinian elections be democratic? Seems that’s a state of mind that is still unacceptable to most of the ’Third World’.

Realistically, I shall not see peace in the M. East in my lifetime. It really does not depend on the Israelis. No matter how brutal the defence of the country continues to be, it is a 100% certainty that, were a Palestinian equivalent to Sadat suddenly to appear in Jerusalem – with the political power over his/her own people as Sadat then had in Egypt, even Sharon’s slightly moving hand would shoot out in welcome.

Israel is desperate for peace. It has the intelligence to know that peace will bring prosperity to a country that already has achieved an unbelievable amount despite the lack of peace. Make them a decent offer. They won’t refuse.

But it ain’t gonna happen.