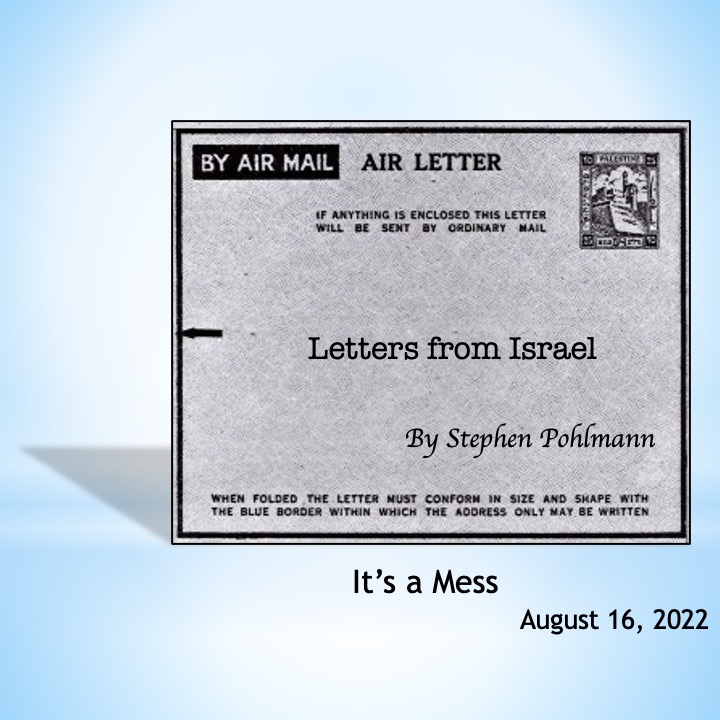 Nearly every story in today’s paper illustrates the mess most of us are in, wherever we are, whoever we are.

How does one stay calm, happy, tolerant, when all around is blatantly a mess?

Obviously, I have a very limited view of the World. I try to glance at ‘international media’, but even then I am warned by many that I am being influenced by ‘mainstream’. Maybe, but then were does one start with the other news channels. There are millions of them. Many reach me without my permission – or even without my knowledge. Some of the time, it’s some algorithm that is giving me information. Or perhaps humans are involved.

You may recall that I have many little books available online at Ourboox.com (including all 400+ of these ‘Letters’). I was today told that we’re having to focus more on content control, as ‘books’ are being uploaded to the site which are basically ‘criminal’. So who’s in control of the content? 10 people like you and me, pressing the ’ignore’ or ‘delete’ button?

Take some of the subjects in today’s paper.

Iran openly threatens to wipe Israel off the face of the Earth, yet the UN shakily signs a deal with them that opens the door to a nuclear weapon. The fact that Israel is thought to have between 50-70 of them does not appear to worry Iran, nor hide the fact that millions could die.

Russia continues to destroy Ukraine at high costs to both sides, while the World has little choice but to watch.

China refuses to sit down and talk with the Taiwanese; U.S. Republicans go and chat with Taiwan, and again we’re pushed to the edge.

Our roads – We have had more road fatalities in Israel than victims of war. There seems to be no solution; bad drivers, stupid/naive pedestrians, irresponsible authorities, zero education etc. etc. I wrote a letter to the newspaper: we have a national day of remembrance for the fallen (in war, terrorism etc.). 24 hours of deep contemplation, highlighted by sirens announcing 2 minutes’ silence. Everyone, I mean everyone, stops what they’re doing and stands in thought. Every car, bus, truck stops. (I am not sure about the trains…). So I have now suggested a day for a subject even more serious: a day for the victims of accidents. 24 hours thought and 2 minutes respect. That will get their attention.

Jordan – Peace was signed with Jordan 28 years ago. Since then, nothing. No Jordanian tourists here, no conciliatory words for Israel in their press, no hint of providing the official state for the Palestinians. But now things are happening. We are talking. They will build a solar energy plant in the desert and provide us with power. We will build a desalination plant and provide them with water. A joint industrial region will be established, joint tourism on the Red Sea shores – and so on. Jordan sees what is happening. The Middle East division is having new lines drawn. Jordan doesn’t want to be left out in the cold.

Gaza – If a battle can be defined as ‘near perfect’, then this was it. 3 days…finished. Pinpointed killing of Islamic Jihad leaders with yes, this has to be said, the minimum of casualties). Hamas, who run Gaza, stayed out of it – for one or more of many reasons. Zero Israeli casualties, thanks to the almost perfect Iron Dome missile defence system. Of the Palestinian casualties, it was clearly shown that more were killed by their own fire; missiles falling back into Gaza. And, apart from some noise from Iran, Russia etc., almost zero international criticism of Israel. The details of this ‘incident’ were clear to see.

Terrorism in Jerusalem – A Palestinian from the West Bank opens fire on a bus and injures many. He actually then took a taxi to the police station and gave himself in. They found his gun in the taxi. Yet the life in Israel’s capital will go on; as will tourism.

The Palestinians – You would think that after 74 years of support from the international community, many wars, suffering, open corruption, poverty, misery, the people would have noticed that their neighbour, Israel, has, without any obvious favouritism from the international community, built a powerhouse of a country. Yes, Israel has endless domestic problems, but it is still among the most successful countries in the World.

Shouldn’t the Palestinians be asking themselves why? They see their brothers, or at least their cousins in the Gulf, in N. Africa, and now even in Jordan, learning to live in peace with this neighbour. Israel has so much to offer. As Anwar Sadat proved, you don’t have to like your neighbour in order to make peace. Yes, he gave up his life for that. But, in hindsight, for the region, it was worth it.

Amnesty – After their almost criminally-wrong report claiming apartheid in Israel, now that once wonderful and now shamed organisation spreads similar rubbish about Ukraine. Can it be that Amnesty is an anagram of Putinism?

Olivia Newton John’s great grandad was a German Jew who escaped Hitler and became Prof. of Physics at Cambridge and Edinburgh Universities, winning Nobel prizes in physics for his students and later, for himself.