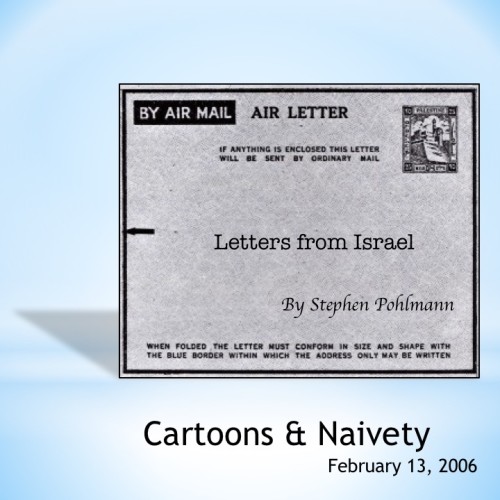 It’s how we handle our ignorance that worries me. Our naïvety, our gullibility, our readiness to accept as fact so much about which we know so little – that’s what’s messing things up.

In my miniscule way, I’m trying to put an objective view on a microscopic part of the World. Not even a finger in a dyke.

Last week, an Israeli court sentenced Omri Sharon, the son of the comatose Prime Minister to 9 months in prison for corruption – he was found guilty of illegally collecting extra funds for his father’s electoral campaign.

Last week, an Israeli court convicted veteran Knesset member, Naomi Blumenthal, for using Knesset funds to pay for hotel nights for several fellow politicians, to prevent them from having to drive home during critical electoral meetings – and also for attempting to conceal this information.

Wow! We caught the criminals!

Hamas are fighting corruption. Some like to remind us that this is the prime factor that brought them into power. They have arrested several Fatah leaders, and are requesting extradition of others who have fled the country. Most of the latters’ names are unknown to us. But we do know who their leader was. Everyone knows that name: Yasser Arafat, the man whose face is still plastered all over the country. Gaza Airport has been renamed in his memory. He’s the Man! It is a fact that he funnelled millions, if not billions, into his private accounts. Ask Suha, his wife, who still walks the exclusive shopping streets of Paris and Geneva.

So why aren’t they talking to Suha?

ETA declares the Basque country an autonomous state and demands that the Spanish government recognises and supports them. Ditto IRA and Northern Ireland, Tamil Tigers in Sri Lanka. Yet none of these planned the destruction of the governing state. They had terrible things in their manifestos, but not total destruction.

And what does this horrible state of Israel consider? How to continue financing the PA authority while Hamas are in control? And the fact that the Palestinians have continuously held back, delayed or simply refused payments to the various Israeli authorities and utilities providing services to them refuses to be publicised.

Israel has heart-wrenching battles with its own citizens, while removing them from illegal homes in the territories. Yet the discussion about the thousands of illegal homes built by the Bedouins within Israel proper continues.

Right now, I’m listening to the BBC report on the production of ‘The Producers’, which is proving to be a big hit at one of Israel’s leading theatres. For the few of you how did not see the wonderful Mel Brooke’s film with Zero Mostel and Gene Wilder, this is Brooke’s musical version, which has been such a success in USA and UK. The story centres around 2 producers who need a slam-dunk theatrical failure in order to grab the funds invested in them by lots of rich old ladies. They choose the musical ‘Hitler in Springtime’. How can it not fail?

Surely Israeli society needs to be open, self-critical and possessing a sense of humour in order to stage it….

Let me make myself clearer…

“The Cartoons – As You Like It”, a new musical, opens in downtown Teheran, with crowds lining the streets for tickets.

If the Prophet Cartoons fiasco does not wake the Western or civilised world up, nothing will.

Where did all those Danish and Norwegian flags come from? Do we really believe these quiet peoples have been so insulted that their reactions are justified? (By the way, an Israeli website www.boomka.org is organising a competition ….of anti-Semitic cartoons! Some criticism here, of course, but no boomka flags burnt).

It’s known that, in early Islamic days, the images of the Prophet were commonplace – even coins were minted with the image. Like all such ‘rules’, this was introduced by human beings.

Haven’t you ever just leant back and wondered what is so bad about allowing images of the Prophet? Insulting ones should be frowned upon of course, just as the anti-Semitic ones that have appeared just about everywhere over the years should be. Mohammad was a human. He married at least 11 times, the youngest of his wives, Ayisha, was only 6 at the time. How much more human can you get! Or maybe this is the reason no images are allowed. …Just joking!!

I used to read the Guardian – especially the European edition. (Not recently, though – very strange format). But I went off it some years ago when it because more than obvious – even to tolerant me – that it was anti-Israel. While on a trip to Europe last week, however, I had to buy it. 4 days’ editions (at €3 each!). It was running a leading article by Chris McGreal, comparing Israeli politics to South Africa’s Apartheid. The first day’s lines were so infuriating. So much clever subjectivism. (Look long enough at a cloud, and you’ll see whatever you want). Yes, there are parallel situations, and there is no question that the lot of the Palestinian people today is bad. But direct comparison is just silly.

I started my letter to the Editor, but couldn’t get to a Internet connection. I should not have worried, for several letters the next day reflected my feelings – just as others supported the views. The 2nd Day just added fuel to the flames. Then came the ‘educated comments’ and more letters. I was coming to the conclusion that this was a subject that had no meaning – no solution if left in the hands of the ignorant and naïve.

The 3rd day had a surprisingly balanced rebuttal. The Guardian was just selling newspapers, I concluded.

But a week later, what do I read? Oxford University is sponsoring ….’Israeli Apartheid Week!’ Among the contributors are the Ilan Pappe, the left-wing Israeli academic and Karma Nabulsi, a former PLO representative and currently politics fellow at Oxford. The conference is chaired by Prof Steven Rose. The 3 are among the academics who last year tried and temporarily succeeded in introducing an academic and cultural boycott of Israel.

Last week was Tu Bishvat. This is the holiday when dry fruits and nuts are eaten, symbolising the ripeness of the produce and the need to re-plant. It is the day when Israelis go into the hills valleys and forests and plant trees. It is said that Israel is the only country in the World whose deserts are shrinking.

Tu Bishvat is also Aviva’s birthday, according to the Jewish calendar. Yes, I gave her a 2nd present.

In January, a record number of trips were made on the Israeli trains – over 2 ½ million.

The new terminal at Ben-Gurion airport has to be one of the ’nicest’ in the World. It may not have the richness or size of many others, but it’s design and décor, with so much Jerusalem stone, is special. And Nokia’s ‘World’s largest garden advertisement’ – their logo in flowers – a sight to see.

I’m attending the Scandefa Dental Exhibition in Copenhagen next month. Think I should cancel the trip…..?