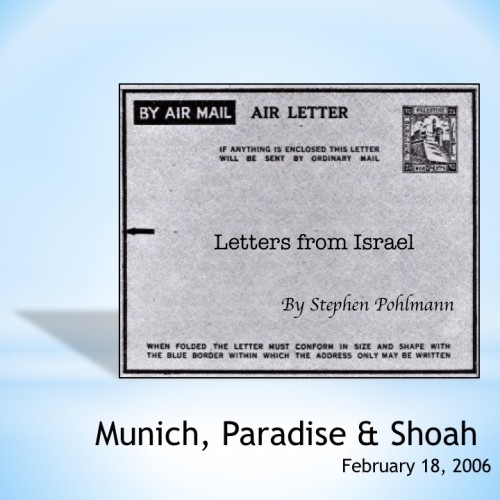 Eliana forwarded to me an appeal sent out by the father of a victim of one of the suicide bombs. It really does put the making and the success of ‘Paradise Now’ into the real perspective. Just what are we glorifying? There’s no excuse for suicide killing, just as, on a different scale, there’s no excuse for bombing the Italian consulate in Benghazi, resulting yesterday in the deaths of 10 persons.

Yesterday, we saw ‘Munich’. So much has been said, written and read about Spielberg’s film. One either ignores the whole subject or, like me, one spends the time and money and goes to see the film. And Steven makes another few pennies. (We go as pensioners now – reduced-cost entrance).

Now I can draw my own conclusion. And it’s rather non-descript. I could focus on such facts that show the killers’ families crying, but not the families of the Israeli athletes. I could show my frustration that Spielberg dares compare the killers and their executioners, tries to humanise those who interrupt and threaten to destroy one of the last bastions of World peace – the Olympics.

But I walked out of there thinking that the film won’t change anything. The hate will continue, the killing will go on, the intolerance to one’s neighbours will never stop. And sick birds fly.

By the way, the film mentions perhaps the first of many Palestinian terrorist actions after Munich: the letter-bombing of the cultural attaché at the Israeli embassy in London, September 19th, 1972. Ami Shachori was at the end of his 3-year stint. He has just come back from lunch with his replacement who was spending a couple of days with him, learning to take over the reins. His secretary handed him a thick envelope, covered in Dutch stamps. She had been about to open the package – and asked Ami to be sure to give her the stamps. Seconds later from his room came the thump! as the bomb exploded. He staggered out and died in the corridor. You know his secretary: Aviva, my wife.

I did have memories of ‘Shoah’ yesterday, seeing ‘Munich’ in an Israeli movie house.

‘Shoah’ (Holocaust) was the nearly 10-hour movie by French director Claude Lanzmann. It was shown in 2 parts, giving the viewer the chance to see each part on separate days. I saw the whole thing during one day.

The film was not a repeat of the archives; there was no image of ‘the real thing’. The film was an epic of interviews with the victims, the perpetrators – and the witnesses. Through his piercing camera, Lanzmann got deep inside the hearts, minds and souls of his interviewees, taking them back in time – and sometimes geographically – to the events as they happened. The translations between French, English, Hebrew, German, Polish were not cut. The film was plodding, intense, but riveting.

And even more wrenching were the gasps and sighs from some around me. For there were survivors around me in the theatre. They had made the brave trip into the auditorium and were re-living their experiences.

It shall never forget that day.

And yesterday, Israel said goodbye to another ‘queen of song’. Shoshana Damari died on Thursday, aged 82. She was a combination of the English Vera Lynne, the darling of the troops, and Edith Piaf. She was Yemeni. Her powerful, perhaps guttural voice was mixed with some of the most emotional songs in Israel’s history. Her ‘Kalaniot’ (anemones) became synonymous with Israel’s survival – especially when used as a reference to the red berets of the British soldiers during the Mandate times.

We spent a few minutes outside the Cameri Theatre (where they are showing ‘The Producers’), just to pay our respects. She lay ‘in state’ there for a few hours, so that Israelis could pay their respects. The ‘show’ from there, carried live on TV, was very special. And she has been laid to rest in the Trumpeldor cemetery, a small area in the centre of Tel Aviv, where many of Israel’s cultural greats are buried.

Now to watch the FA Cup.