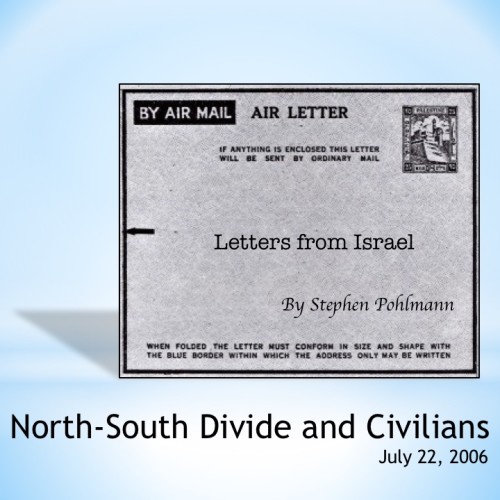 The refugees are heading south. We have a niece from Haifa and her son staying with us. At least a dozen others have found rooms with the rest of the family. And others come for the day.

During the Gulf War, despite only certain areas being attacked, all of the country felt as one. But as long as today’s attacks only hit areas in the North, the country is divided into fear, paralysis, empty roads and full shelters in one part, while here, the streets are full, the restaurants and cinemas, too. We attended a big show 3 evenings ago – among an audience of 4,000. We had dinner on the seafront on Thursday (in the same place where they arrested 2 would-be suicide bombers last night).

Almost every public place is offering reduced prices to the Northerners, whether fairgrounds or beaches, country clubs, night clubs and eating places.

In the north, all schools and nurseries are closed, as are most businesses, stores and malls. And tonight I fly to USA and Canada. Right now I can leave the family. But I have instructed Aviva to store the antique glass at the first sign of any attack on Tel Aviv – and I shall be on the next plane home.

Politics? I think the Lebanese PM, despite his very difficult position, should not threaten the Israel with his army. In the long-term, the real enemy for them is not Israel but the extreme fundamentalist, as in Egypt, Jordan and Saudi. (It is interesting that, when Syria was faced with the same threat, as I have so often mentioned – Hama in 1985 – they crushed the threat most brutally. Yet now they support Hezbollah. Israel for them is an even worse enemy). After the Hezbollah threat has been destroyed, there is no doubt that Israel will be among the first to offer help to it’s northern neighbour rebuild its country.

Syria is trying so hard to get attention. In today’s interview with their Foreign Minister, he said that before any negotiation, Israel must first leave occupied land in Gaza (none) West Bank (yes), Lebanon (not until 2 weeks ago) and Syria (none). If they want Israel to respect UN resolutions, then they must, too. And the UN has declared the northern borders clear of land dispute. Peace and co-living must surely be top of the agenda. If not, their true self is exposed.

Civilian casualties. You should see the heated discussions on Israeli TV. On one side, the reality that Hezbollah spent 6 years building this situation, which includes digging in under every 2nd building. A US TV channel has leaked the fact that Israel will be receiving new bombs specially for deep bunkers. That will save soldiers’ lives who otherwise must make these step-by-step incursions, some of them step on landmines etc. But that also means more ‘collateral’ damage if civilians do remain in those areas. Israel has warned them to evacuate, but has bombed most of the escape routes.

It is too easy to blame Israel directly for the tragedy in Lebanon. I wish they would realise that their brothers’ dreams have always centered on doing exactly that and 100 times more to Israel – even since it’s establishment.

War is a horror, whether you call it ‘freedom-fighting’ or a ‘battle for survival’.

An e-mail is running around at the moment, reminding us that there are 500 million Moslems surrounding 5 million Jews – and that if it were the other way round, it is really not difficult to imagine that there would be peace in this region. But having read some of the contents of chat-rooms, maybe that’s not so true. I hope it’s not anti-Semitism, but just the natural ignorance of one human of a fellow humans’s life and character.