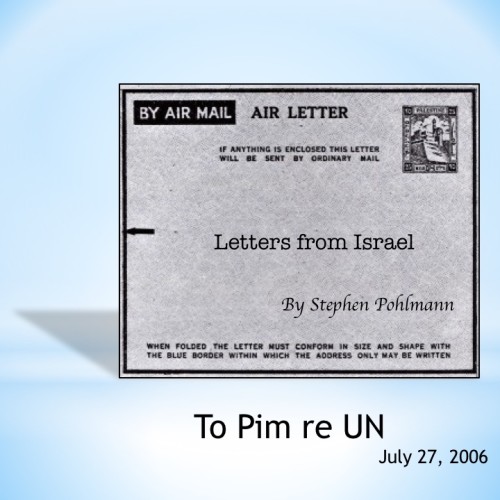 Guess you’re somewhere in the USA or Canada, and hope you can add some of your personal energy to a fine range of instruments.

About the situation in the middle east, in reflection on things you wrote earlier, I have of course been thinking.

And, thanks for making me see more details, I put myself once in a while in discussions about it all a little more in the middle than before.

You must understand that although Dutch have always been best friends with Israel, there is also a David and Goliath effect, and being Dutch in a small country, we tend to seek the side of David more often than that of goliath.

OK, I take it as a moral duty to point at the complexity and various sides in this conflict, where people sometimes say without a detailed view ” it’s too much power from the Israel side, so the others are right”.

To you I must admit that the whole complex is getting more and more complicated, having Israel drawing new borderlines on the West Bank area, which no doubt will be an extra new impulse to new conflicts.

At the same time it’s unbelievably stupid that the Israeli army without purpose killed four men of peace.

This will give the opposers of the Israel point of view extra arguments to state the inhumane character of this expedition, as not only many civilians on Lebanese side are victim of this clash, but also UN-people.

I truly hope that these operations will reduce power of military Hezbollah, but realise at the same time that this organisation seems to be doing a lot social work in many parts of Lebanon, thus creating a strong support under the average low-income/no perspective people living at the margin there.

And that’s another thing to be dealt with in order to create a definite peaceful situation.

there must be prepared a plan not only to restore the damage done to one and another, but more than that a social plan must be created, under international direction including the Arab world as well as the Israeli and western world.

People with better perspectives and a quiet future don’t go to war, they live in peace with there neighbours and are open to dialogue in case of misunderstanding.

People with bad future perspective and nothing to lose will follow any “leader”, being Hitler or Mao, or even Bush, as they are open to any “better” than worse.

In the meantime I try to oversee it at, hope you and your loved ones stay safe and wise, and te loss of innocent lives on both sides come to an end.

Keep on writing, you help me and people around me to understand it all a bit better, and don’t forget to sell like hell !!!!!!

…your words sadden me. This is why I shall continue my tiny attempt to tell the story – because intelligent, decent and basically fair people like you still do not understand what is happening, and still think Israel wants something other than to live a normal life, at peace and good communication with their neighbours.

What on Earth is the UN doing in that area, their flag flying literally not more than 10 meters from a building flying the Hezbollah flag during a war between Israel and that organisation?? This is the first paragraph on the UN website on Unifil, the first that comes up on Google (how more obvious and clear do you want me to be?):

UNIFIL was created in 1978 to confirm Israeli withdrawal from Lebanon, restore the international peace and security, and help the Lebanese Government restore its effective authority in the area.

(The Block letters are theirs, not mine)

And Fox News, this very minute, report that Unifil are reporting fire at them from Hezbollah now, suspecting that Hezbollah is building up an area from where they can attack Israel, knowing that Israel is now doubly-careful not to cause any more UN damage.

Unifil has been useless for most of these 28 years. They were stationed in the area when Hezbollah attacked northern Israel so heavily in 1982 that we has to invade the country, leading to the 18 messy years of occupation of the southern area.  In fact, you may recall that the previous time an Israeli solder was captured, it was in a UN vehicle!

That does not mean that I think Israel has good reason to attack UN, but I certainly believe UN’s work in this are has been a joke. The word ‘observer’ has been used, but, in my opinion, they should observe this situation from somewhere a little more safe – like the inside of a news reporters’  car.

And another point: you should learn a little about another pathetic dept. of the UN (whom, in general, I greatly admire and respect) – that is UNRWA. I believe this is the longest running such UN organisation, supposedly to help the Palestinians. I could say so much, but perhaps sum it up by wondering why, now, during the current conflict, areas in Gaza, free of Israelis/Jews for almost a year, there are towns still referred to as ‘refugee camps’.

Just when will all the financial support that the Palestinians have been receiving over the 58 years be used for building instead of destroying and causing suffering to so many generations of Palestinians?

I am a lefty. I want peace with the neighbours. I believe there are many Arabs who truly do not want all this, who, if lead by decent people, would be at peace with Israel. BUT, I am also not dumb! The Lebanese PM claims he did not know anything about the build-up of arms in the south by Hezbollah. (“I did NOT have sexual relations with THAT woman”). What a JOKE! 1,400 rockets have fallen so far on Israel.

It is estimated that there were between 10-15,000 of them transported from Iran to Syria and across Lebanon by land to the southern areas. An incredible array of bunkers exist throughout all villages in the south, indicating six years of frantic work in advance of this attack. He didn’t know?

These people want us dead. My family, my friends, my home, my existence. And if they were ever to achieve this goal, do you really think they will stop there? Pim, they will only stop at the gates of those countries whose men agree to walk around wearing headscarves, with the women of the family walking a respectful distance behind, totally covered.

I am moving to the right.