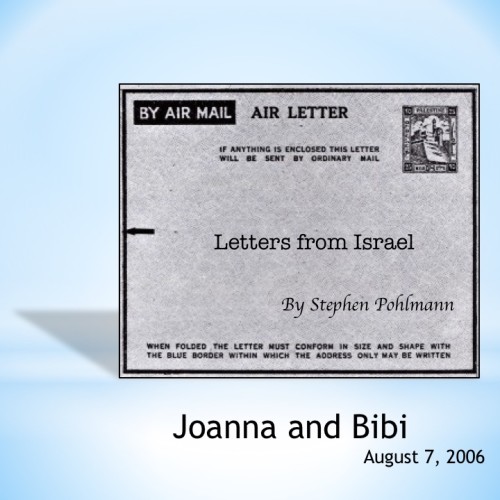 Whatever the causes, the rights and wrongs of attack as a means of defence, and the extent of the provocation, Israel does seem to be “using a sledgehammer to crack a nut”, with the consequent increase in attacks from Hezbollah and escalation of violence.

Terrorism mustn’t win, but is this the right way to fight it? Where will it all end?

Tried Skyping you – Too busy to write – and so sad to see that you’ve fallen into the ‘outsider trap’. But you’re not an outsider, Joanna – your country of birth has been attacked by the same people, and your adopted country also. The Madrid bombing morgue was in the adjacent hall to the dental exhibition.

And please don’t fall for this ‘disproportionate’ bit. The only disproportion here is the fact that we do NOT use the military might we have at our disposal, neither in the air not on the ground, in order to try to ‘do things correctly’.

Hezbollah is NOT a nut. Nor Iran, Syria, Al Qaida.

What kind of world are we in, when this horror builds Nasrallah into a hero?

If you get a chance, watch Benyamin Netanyau this evening on BBC’s Hard Talk. I think he should give up politics and take on full-time overseas diplomacy on behalf of this country. E.g., he was asked about Hezbollah’s position in the Lebanese govt.

First, a party that has the gun in one hand, wishing the destruction of a sovereign state is not exactly my idea of a normal political party….see IRA.

Hitler was voted in by a much greater and clearer democratic system. That does not make him right; it only shows him to be the great Speaker – and the electorate to be blind.

Over 1000 rockets in the last 5 days – ALL 100% of which were aimed at civilians, with 1 accidentally hitting a military target. Israel’s bombing is 100% aimed at military targets, with the inevitable number of accidental civilian casualties, directly as a result of the Hezbollah’s tactics.

Sky News finally referred to the fact that while southern Beirut is suffering, the rest of the city is almost normal. Beaches and pools are full, and the Arab foreign ministers DARE gather in one building in the city and meet with PM Siniora (who cries for his country – cries for the 40 killed in the village of Houla – and 2 hours later admits that the death toll, still too many, was just one).

World opinion is not a carte blanche for correctness, especially nowadays, where the propaganda weapon is sometimes more effective than the gun.

We are currently losing that battle (although most ‘moderate’ Arab countries thank God that Israel is doing their dirty work for them – so many have potential crises with the Islamic fundamentalists).

Sorry, Joanna. That’s the mood I’m in now. I’m passionate about this because I care about this country and its decency being questioned – and I care about persons like you, very close, whose eyes may not be shut, but they sure are veiled….

Finally, you ask where it will all end. Again, as Netanyahu said, whatever the outcome of the war, there will always have to be a settlement. But you were asking about terrorism, not about just this war. Where/how will we defeat Islamic terrorism (totally different to Basque, Red Brigade, IRA, Baader-Meinhof – few suicide killers among that lot – few who believed that their methods would bring them ever-lasting Paradise).

My only answers so far are

Joanna, this was supposed to be just a quick answer. But we have family staying with us, refugees from the north, their kids not knowing what to do, our nieces playing their accordions in the street as their jobs as independent music teachers have gone – schools and business in the north are closed – crops rotting in the fields – fires started by rockets are blazing – and we also have dead and injured.

Our focus is, first, peace – and then to get on with our lives, at peace with our neighbours.

Those little ‘nuts’ will only be happy when we in Israel and you in the area around Barcelona are either following Sharia law – or are dead.