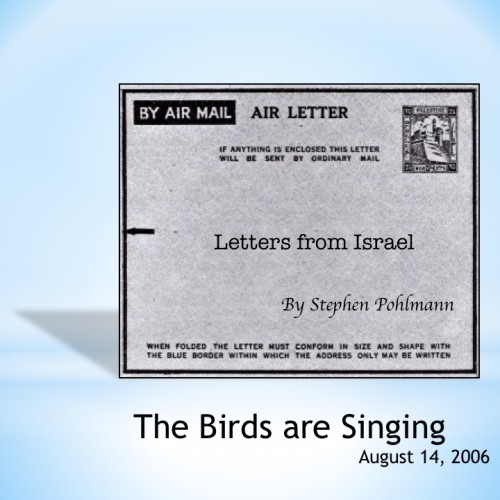 Sky News was talking to Israeli soldiers relaxing on the border. Some were hugging each other, others sleeping. Many said the obvious about not having confidence in the ceasefire etc. and others couldn’t wait to be back with their families or returning to their jobs.

And one said, “As long as the birds are singing, there’s a ceasefire”.

I’m trying to identify the guy. If he’s not hitched, I want him as my son-in-law.

You know, I hate having to write these letters. I want to write stories, poems, books – or play tennis/golf. But I do have to write them; it is my tiny way to knock some sense into the sensible. (The others, we’ve lost them).

And you, you lucky recipients. You have the choice of deleting. Even can include a 10-second response before deleting – having read or not.

* 2 Pictures – Our niece’s 18 year-old son a day or two after his draft. One picture with his brother; the other with 2 other conscripts. There is no joy in his eyes. No joy in THEIR eyes. Until a week ago, he was this little kid with dreadlocks, leader of a reggae band with dreams. He dreamt of growing up, and of attending Julian Marley’s concert here, which of course was cancelled.

* Oz Almog’s words. I never thought I would ever allow myself to distribute such an outcry. But how else will you/they wake up?

I went for a 1 hour walk to the beach this evening. Some comments on what I heard on BBC’s Europe Today:

* Gen. Mueller (?), German Army Chief of Staff was asked about possibility of German soldiers in a UN force in Lebanon. He was against it for many reasons, suggesting that a NATO force would be the most capable of enforcing Chapter 7 – armed reaction to resolution violations. He added “What kind of response can you give if the ‘Lebanese militants’ attack? Talk?” I smiled while sweating in the evening sun. “But that’s exactly what many demand that we do”, I thought to myself.

* A London Muslim was given a recorder by BBC to voice his thoughts during last Friday’s visit to and around his local Mosque in Walthamstow, London (where a couple of those arrested live).

* Guenter Grass is 80. He is one of German’s greatest writers, a Nobel prizewinner. He is worshipped because of his values, his criticism of the Nazi past and the right-wing present. What a shock for Germany, now that he has admitted to have been a youth member of the Waffen SS. His biographer, Michael Jurgs, was devastated – not so much for what Grass had been, but for the 60 years of silence. And why ‘out’ now? Grass’s autobiography is to be launched next week. No such thing as bad publicity, right?

And then there was today’s Jerusalem Post, one of our 2 English-language dailies. The other, Ha’aretz, is more to the Left – but J-Post will print anything – still a relatively balanced paper, compared to UK’s Guardian and Independent.

* Page 2 shows pictures of all 24 soldiers lost in previous 24 hours. Names, home town/village, and a few words of background. One reserve was from Kibbutz Evron, where Aviva spent some of her youth.  His grandparents helped establish the Kibbutz. I remember attending the 75th birthday of the kibbutz.

* David Grossman, Amos Oz and A.B. Yehoshua are 3 of Israel’s greatest living writers. They, especially Oz, are known leftists, and only last Thursday hold a joint press conference urging the PM to end the fighting. Grossman’s son was among the killed this weekend.

* Democracy? Look at the many articles pro and against Olmert for his handling of the war. Some want him out, some reserve comment, and others thank him for doing ‘the right thing’.

* In addition to Melanie Phillips’ “Londonistan”, William Shawcross reminds us that the problem is ‘Islamic Fascism’. Who has the guts to read on such a subject? Last week’s arrests in UK involved, in most UK papers, ‘British-born’ and ‘of Pakistani origin’. Not even ‘Muslim’ or ‘Islamist’. Another wake-up call.

* Barry Rubin reminds us that Syria and Iran got off scot-free. These 2 countries ‘were able to engage in one of the biggest terrorism-sponsorship events in history at no cost whatsoever’.

* The two reasons Israel went to war were to disarm Hezbollah and to return our 2 soldiers. Neither have yet been achieved….Watch this space.

* UN Resolution 1706 says the int’l community should help re-build Lebanon. I have no argument with that, and there is no doubt that parts of the country were utterly devastated. Over 3,000 missiles fell on northern Israel. Yes, some fell in fields (and caused many 1000s of acres of burnt forests, orchards, crops). But the rest also caused severe destruction. No suggestion of help? “Oh, right” the letter-writer writes, “we’re Jews”. How can we argue with that?

* “Quit the pretence”, another writes. “…Kofi Annan….finally ask the august assembly: Who accepts and who denies the existence of the State of Israel in its ancient homeland? Such acceptance is the only solution. There is no other”.

* “Isn’t it obvious why America, Canada, Britain, India, Australia, Spain, Scandinavia and the rest of Europe are subject to the terrorist threat? They are occupying Arab land”.

* “How can Israel have apartheid if Hezbollah’s bombs kill Israeli Arabs”,

But the birds are still singing.