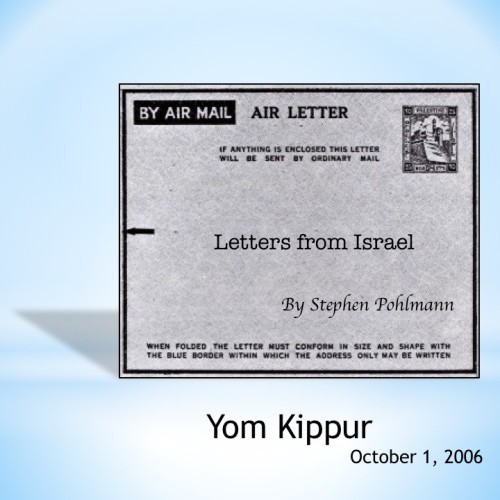 Sunday, October 1st – Today at 17.00, Yom Kippur starts. It ends at 18.00 tomorrow. The Day of Atonement – the blessing on everyone’s lips is ‘Gmar Chatima Tova’ – the ultimate signing for good.

The country basically stops. No traffic, except for emergency vehicles. No TV or radio (except for foreign cable channels). The streets will fill with people on their way to the synagogue – and just walking, talking, riding on bikes, skateboards, rollerblades etc. etc. Most will fast for 25 hours…the observant will be good and quiet. The secular in these snobby northern suburbs have emptied the video stores and will watch them – the videos.

I attach photos of the street below – emptied. And then filling with folks, dressed mostly in white, on their way to the synagogue. An almost total absence of polluting noise. My niece’s boy looks forward to a day on the highway.

[The Israeli Army left Lebanon in the last few hours. With still bad memories of the Yom Kippur war, when Israel was attacked at its most vulnerable, now we hope against hope that we shall not have to go back in.

Our soldiers are still hostage, Hezbollah are still there, Nazrallah claims he has more arms than before. How wrong is that. But a stronger UN is there, and just across that skimpy fence, we see the flag of Lebanon and not of the Hezbollah. This calms us, at least for today.

On the Gaza front, again we have ‘withdrawn’ while our soldier is still in captivity. A helpless feeling – literally. For no ones appears to want to help. Kassams continue to fall on Ashdod, Sderot and Ashkelon. When should we stop the warnings and take real action? The Hamas have not dug down deep as Hezbollah in the north. But they are hiding behind the wife’s skirt and the child’s smile.

The Palestinians talk of a government of unity. Yet there is also talk of Fatah threatening a coup. President Abbas has given up taking advice from Egypt, and is now talking to Mashal, the Hamas leader expelled some years ago from Jordan and now wallowing in Syria’s mud.

What will it take to get Hamas to agree to the existence of the State of Israel? Perhaps a better understanding of Yom Kippur.]

Many dress in white, the colour of cleanliness, cleanliness of the soul. (The bodies of the dead are wrapped in a white shroud for burial, also depicting cleanliness on the road to wherever).

Many will spend hours in the synagogue, making their peace with God. It is popular to say that, for the Jews, the Day of Atonement is an opportunity to right the wrongs done to their fellow man. But, in fact, this should have been done first. On Yom Kippur, one approaches God with a clear conscience, having already made peace with one’s neighbour.

And there is emphasis on working on oneself; not being so concerned with getting the other to atone. This is not debt collection, but debt clearance.

Wouldn’t it be wonderful if we were not only all of one faith, but also all of one single philosophy. Yom Kippur could and would be for everyone. After 25 hours, much of the pollution of this world will have evaporated.

I finished Donna Rosenthal’s ‘The Israelis’. I enjoyed the read; perhaps you will, too. Even to a person living here in the country, it opened my eyes to the incredible complexities among this small population of, now 7 million. God help Israel when there’s peace, I have often said. For there are so many potential problems within the country, held together by what is not more than a spider’s web: security.

Take just the Christian community of 200,000, and read how diversified they are: Arabs and non-Arabs, Copts from Ethiopia and Egypt, Orthodox from Armenia, Russia and Greece, Anglicans, Presbyterians, Catholics and Lutheran, all arguing over where He was born, where He died , and where he spoke to Her. They even have different days to celebrate Christmas and Easter! (Maybe that’s clever: no argument on who carries which Cross down which street on which day).

I apologise to you all for writing so much, especially during the Lebanon War; for sometimes writing so emotionally, and perhaps too subjectively; for thinking bad of those who insult my parents – for they have the same parents – or at least the same ancestors. And I apologise to the World for not believing that tomorrow there will be peace.

There. Been there, done it.  Now, where’s my white shirt?